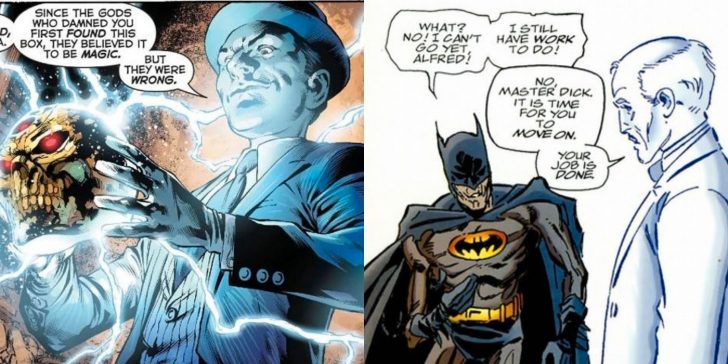 In The Batman, Andy Serkis makes a case for himself as one of the best ever actors to play Bruce Wayne’s butler, Alfred Pennyworth. Though he is slightly younger, the version of Alfred portrayed by Serkis is the one that most DC fans are familiar with. He helps with tasks around the Wayne Manor, and on occasion, handles business related matters at Wayne Enterprises.

However, things haven’t always been the same about Alfred in the DC pages. Over the years, there have been a number of different versions of the character. The versions range from the ordinary to the strange. Some have also been shown to be villainous, going against everything Bruce Wayne stands for.

In Batman: The Murder Machine #1, Bane murders Alfred so Bruce Wayne requests one of the most powerful Justice League members, Cyborg, to help him build an AI version of Alfred so that he can continue to have a father figure. Regrettably, the AI Alfred ends up murdering every member of the Rogues Gallery.

Even though Bruce has plenty of sidekicks, Alfred is the only person who has always been close enough to him to be considered family. It’s, therefore, understandable for him to find a way to keep him around even after his death. But it’s a huge mistake as AI Alfred reminds Bruce that being overambitious isn’t a good thing.

Alfred is introduced as a member of the Royal Marines in Batman: Earth One.  He meets Thomas Wayne in the Middle East and after losing his leg during battle, he chooses to come to Gotham with him.

This version of Alfred is less of a manservant and more of a friend to Thomas Wayne. He is skilled in martial arts too, which leads to him having a bigger contribution to Bruce’s life as he is the one that gets to train him. It’s the first time Alfred gets to train Bruce since previously in Batman media, the task was accorded characters such as Shihan Matsuda, Harvey Harris, and one of the best villains in The Dark Knight trilogy, Ra’s Al Ghul.

In the comic book tie-in to the Injustice: Gods Among Us video game, Alfred remains loyal to Batman during his fight against Superman. When Superman breaks Batman’s back, Alfred ingests the 5-U-93-R pill and acquires powers, enabling him to brutalize the Man of Steel.

RELATED: 10 Funny Quotes From The Batman

Alfred normally tries to distance himself from the chaos that comes with Batman’s superhero lifestyle but he isn’t one to sit back when Master Wayne needs help either. Moreover, very few people ever get to beat Superman so Alfred can take pride in that. Regrettably, he is murdered by Victor Zsasz and as expected, Bruce avenges his death.

Alfred happens to be living in Arizona in Nightwing: New Order. In this alternate timeline, Bruce is dead and most superheroes have been depowered, thanks to a device activated by Nightwing.

The DC universe doesn’t use real-life locations on the regular, instead, coming up with names for cities such as Gotham and Metropolis. But once again exceptions are made for Alfred. The former Butler had a stint in London in his earlier years too. Here, the former Butler has no reason to live in Gotham because Bruce will never be back. Previously, he has been shown to stay even when Bruce disappeared because he had hope that they’d reunite.

During the “Trinity War” segment of The New 52 storyline, Alfred from Earth-3 is the leader of the Secret Society. He is also said to have helped Thomas Wayne Jr. murder his parents when he was younger.

A version of Alfred that is villainous is unusual but he turns out to be quite the formidable villain. Readers get to see him recruit the likes of Bane to his team, thus making himself more powerful. Making him serve Owlman instead of Batman is revitalizing too. The Alfred surprises don’t end there as he also turns pale after coming into contact with the Joker’s venom.

In Batman: Castle of the Bat, Alfred is known by the name Alfredo. He stays by Dr. Bruce Wayne’s side as he resurrects his father, turning him into the giant Bat-Man.

RELATED: 10 Ways Alfred Pennyworth Is The Most Important Member Of The Bat Family

Personality-wise, Alfredo is very similar to the Alfred that fans know of. He never questions Bruce’s intentions and always assists him. Even the idea of stealing Thomas Wayne’s brain and resurrecting him doesn’t shock Alfredo. As is always the case, he is certain that Bruce knows what he’s doing. And since the story is set in the 19th-century, Alfredo is characterized by many period-related tropes.

After Alfred is subjected to one of the most shocking DC deaths in Superman & Batman: Generations, he starts appearing to Bruce Wayne as a spirit. He continues to offer Bruce advice until his soul gets trapped in purgatory.

The inclusion of a spirit Alfred underscores the fact that the butler truly completes Bruce Wayne. As confident a man as Bruce is, he always needs someone to police him and offer an ear whenever he is troubled. Sadly, Spirit Alfred doesn’t get to last for long, leaving Bruce in a desolate state once again.

Bruce Wayne is said to be in his late 50s in Batman: The Dark Knight Returns, hence, Alfred is portrayed as a very old man. Still, he continues to serve Bruce.

The storyline once again proves that Alfred is the most loyal DC character. Never does he consider choosing his own path that doesn’t involve Bruce. And despite his failing health, he doesn’t just limit himself to butler duties. Alfred is seen helping Bruce during the direst of circumstances. He even makes the decision to initiate Wayne Manor’s self-destruct mode in order to protect Bruce’s secrets.

In All-Star Batman And Robin The Boy Wonder, Alfred is an unruly and muscled butler who doesn’t always take orders from Bruce Wayne. He is said to have served in the Royal Air Force and British Secret Service.

In most comic issues, Alfred serves Bruce Wayne diligently so seeing him question Master Wayne all the time is as surprising as it is refreshing. Although the arguments between them lead to uncomfortable moments, this version of Alfred is much cooler as he is able to fight criminals by himself and save people too, (something he does effortlessly when Vicki Vale gets involved in a car accident).

Most Rogues Gallery members are fascist in Batman: Dark Allegiances is Bruce Wayne is offered a job as a government agent. Alfred then joins him in the field as the newest version of Robin.

There have been numerous versions of Robin in the comics but this one comes close to the top because he finds himself in a situation where the stakes are higher. Alfred’s Robin gets to fight in World War II, thus demonstrating his superior fighting skills. He is more friendly to Catwoman too, hence painting himself as more likable.

NEXT: 10 Best Alternate Versions Of The Penguin In The Comics

Next
8 LGBTQ+ Comic Heroes Already Linked To The DCEU