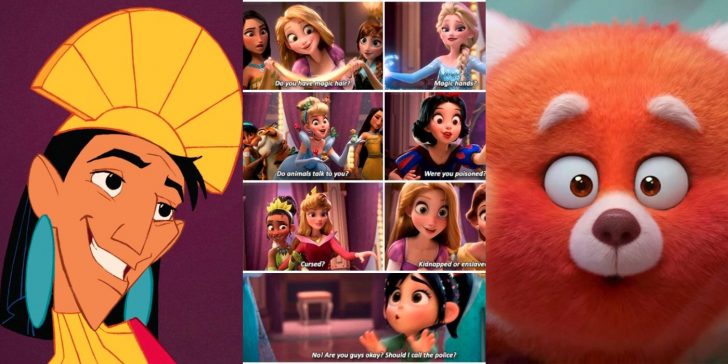 Princesses have been at the forefront of Disney’s movies for years, but there have been fewer actual princesses in recent films like Encanto and Turning Red. The variety of characters has soared through the roof, and some secondary characters are even getting their own movie, like Buzz Lightyear, whose movie Lightyear will be released next month.

Even though there haven’t been as many princesses, there are still plenty of characters who have princess qualities according to the ‘what kind of a princess are you meme’ from Ralph Breaks the Internet. In this scene, classic princesses like Snow White and Cinderella reference common tropes like animal friends, curses, and magical abilities.

Tarzan’s love interest, Jane Porter, was a mere ethnologist from England who ended up going to Africa with her father to study the gorillas. Whether or not she ends up being a princess after she ends up with Tarzan is debatable, but there are a few factors that point to her falling into the princess category.

For starters, she was sort of kidnapped, twice. The first time was more of a rescue kidnapping by Tarzan when she was being chased by the baboons. The second time is when Clayton locks her father, the captain, and her up while he tries to go kill and capture the gorillas. After managing to get free of each situation, she learns how to communicate with the gorillas making her able to talk to animals in a way, definitely certifying her spot as a princess.

Experiment 626, also known as Stitch from Lilo and Stich, was seen as an abomination at first when Dr. Jumba created him. The United Galactic Federation arrested Jumba and tried to contain Stitch to no avail. When they found he was on Earth causing chaos of a different kind, they still tried to capture the creature and bring him back to their space prison. Stich was kidnapped a handful of times throughout the movie and proved his resilience by getting out of each kidnapping.

He may not look like the other princesses, but he proved his princess-worthiness by continuing to get out of kidnappings and by becoming a better person when he found someone he loved and cared about.

Genie was confined to a lamp for many years of his life, and when he was released he was bound to whoever rubbed his lamp. His only reprieve from the lamp was when he was called on to grant wishes, and he always made the most of that by his quips since Genie had some of the best quotes in both versions of Aladdin.

He shares that quality, being enslaved, with a few other princesses, but he has also had another trait that labeled him as one – his magic hands. Genie’s ability to grant wishes is seen happening with the wave of his hands, similar to Elsa. Genie is a princess through and through.

The not-so-well-loved Emperor Kuzco may have gotten what was coming for him, seeing how heartless and self-centered he was at the beginning of The Emperor’s New Groove, but almost being poisoned, and being cursed by being turned into a llama instead was a bit extreme.

Every princess has a fellow powerful leader that is right below them that is looking to harm them, and for Kuzco it was Yzma. He may have already had the palace, the power, and the status, but by being almost poisoned, he joins the ranks among the other Disney princesses and is one of the best characters in The Emperor’s New Groove.

The wooden puppet who wanted to be a real boy, Pinnochio, went through his fair share of trials and tribulations. After coming to life, thanks to the Blue Fairy, he gets tricked and kidnapped by Stromboli’s men, where he becomes the star attraction of a puppet show.

Shortly after, the men take him to Pleasure Island which is cursed, and any boy who makes a fool of himself is turned into a donkey. While Pinnochio doesn’t entirely transform into a donkey, he grows the ears and the tail before he is able to escape. Surviving a curse and a kidnapping would get him an invite into the princess nominee club.

In the film Moana, Maui has many titles. He states repeatedly that his title is ‘Maui, Shapeshifter, Demigod of the Wind and Sea, Hero of Men and Women’, and if that isn’t already a mouthful, honorary princess could be added to that title as well.

He sort of has magic hands, at least with the help of his hook. While the hook may not be the iconic object that represents the Disney movie, it’s still very prominent and important.  The magic helps him shapeshift into different animals. If magic hands aren’t enough, he has magic tattoos that move and tell stories of all he’s done, and he has quite the voluminous set of hair, that may be magic in its own way.

In Disney’s Turning Red, Mei Ling found herself turning into a giant red panda unexpectedly, and to bravely master this new evolution. Her mother told her that her ancestors were granted this transformation in order to protect their daughters and that everyone in their family line had gone through this transformation.

While it wasn’t necessarily a curse, Mei thought of it that way at first, and it was portrayed that way at times, like when her mother and aunts tried to show her how to prevent it from happening again. Finding the balance between accepting herself and the panda, she should be considered a princess under the loose definition of going through a curse.

Having hands that are solely for ‘wrecking things’ can create a bad image, but Ralph learns how to use them for good in Wreck-It Ralph. He finds a way to fashion a new track for his friend, Vanellope, and even punches things out of the way.

Ralph’s hands themself may not have any actual magical qualities to them, but the damage, and the large ways they can be helpful, can put them in that category. Similar to Elsa, he saw them to only be damaging but found a way for them to be helpful, which ended up making him have a qualification to become a princess.

Ratatouille’s Linguini was an ordinary young man, just trying to make an honest living at Gusteau’s restaurant when an unexpected friend entered his life. When he ran into Remy and spared the rat’s life, the friendship that formed came as a surprise. Although the two don’t speak to each other directly, Remy can understand Linguini and there is enough understanding the other way around too.

Being able to talk to a rat is a princess qualification, but that’s not the only one he has. As Remy controls his arm movements by tugging on parts of his hair, and that fits Linguini right in with other princesses who have magic hair and hands. Plus, the film is one of the best food movies, according to Ranker.

Shortly after the celebration of Hercules’ birth, Hades’ two minions, Pain and Panic, kidnap him and bring him to Earth where they give him a bottle filled with poison that was supposed to make him mortal. When they fail in their mission, it leaves Hercules with some of his God-like powers.

Having been both kidnapped and poisoned and survived both, as well as defeating the ones that caused him all that early strife in life, Hercules would more than qualify as a princess according to the princesses in Ralph Breaks the Internet. Having the title of both demi-god and princess are two big titles for one person to hold, but he’s more than strong enough to carry them.

Next: 13 Most Despicable Acts Committed By A Disney Princess, Ranked

Marcy is an MCU, Star Wars, New Girl, and cartoon show fan. When she isn’t watching something along those lines, she can be caught reading anything by V.E. Schwab, or anything in the fantasy section of a bookstore. This is her first professional writing job.