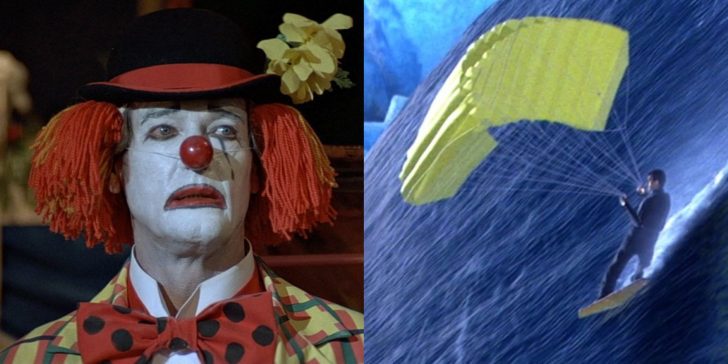 Daniel Craig recently wrapped up his stint in the role of James Bond with a suitably bittersweet finale. The Craig era began back in 2006 with Casino Royale, whose gritty reinvention of the franchise grounded its tropes and motifs in Bourne-style realism. Martin Campbell’s reboot reinvigorated the franchise, but the series is traditionally defined by goofy gadgets and wacky one-liners.

Particularly in the Roger Moore and Pierce Brosnan eras, the Bond films were renowned for their sheer silliness. With absurdly far-fetched villain deaths like an exploding man and set-pieces like a laser battle in space, some Bond movies have leaned heavily into the ridiculousness of the 007 mythos.

Roger Moore’s first Bond movie, Live and Let Die, set itself apart from the grounded espionage of the Connery and Lazenby films with a healthy dose of slapstick comedy.

The movie has some genuinely thrilling action sequences, but it also has physical comedy bits like Bond running across the backs of alligators or Dr. Kananga inflating like a balloon and exploding after being shot with a gas pellet.

The premise was considered a little too ludicrous for the audience to suspend their disbelief: Jonathan Pryce plays Elliot Carver, a Rupert Murdoch-esque media mogul who wants to start World War III so he can have exclusive news coverage. Although this storyline has been reappraised as surprisingly prescient, it’s an incredibly on-the-nose satire of mass media and the 24-hour news cycle. Bond kills a henchman by throwing him into a printing press.

The final nail in the Moore era’s coffin, A View to a Kill, brought the actor’s stint as Bond to an unceremonious end. In the opening snowboard chase, there’s a baffling moment in which Bond pretends to surf on the snow and the Beach Boys’ “California Girls” plays on the soundtrack.

The nonsensical plot sees an industrialist named Max Zorin (played by a never-more-eccentric Christopher Walken) setting out to destroy Silicon Valley so he can monopolize the microchip industry.

You Only Live Twice, the climax of the Connery era that brought Bond face-to-face with Blofeld, delivers one of the most far-fetched Bond movie plot turns before the opening credits have rolled. Bond fakes his death, gets buried at sea, then swims to safety.

The movie’s big finale takes place at Blofeld’s secret lair, which he’s tunneled into a hollowed-out volcano. This base has become the go-to image to represent diabolical delusions of grandeur.

A decade after relinquishing the role of Bond to Roger Moore, Sean Connery returned to the role for an unofficial non-Eon production. Never Say Never Again is a remake of Thunderball (one of the least well-received Bond films of the Connery era) that makes some bizarre changes to the original movie.

Never Say Never Again is an interesting experiment: a Moore-style Bond movie starring Connery’s Bond. In one of the fight scenes, Bond throws his own urine sample at the bad guy.

After the success of Live and Let Die, The Man with the Golden Gun doubled down on the Moore-era wackiness. One of the most breathtaking stunts in the Bond franchise – a perfectly executed mid-car chase corkscrew jump – is ruined with a goofy slide whistle sound effect.

Whereas Live and Let Die had followed the genre trends of blaxploitation films, The Man with the Golden Gun pivoted to Bruce Lee-style martial arts actioners.

Niven plays the real Bond, while his A-lister co-stars all play different agents pretending to be Bond so that the bad guys won’t be able to track him. Its plot is overstuffed and scattershot, but it’s a fun take on the Bond lore.

Brosnan’s stint in the role of Bond came to a close with the critical panning of Die Another Day. The plots of Bond films don’t have to be 100% airtight, but there’s a limit. The villain in this one, Gustav Graves, alters his own DNA to become North Korean.

The overuse of CGI was a recurring problem throughout the Brosnan era, but Die Another Day took that problem to new levels. In the finale, Bond surfs on a computer-generated tidal wave.

The tongue-in-cheek humor of Moore’s Bond films takes center stage in Octopussy. In a crucial climactic scene, Bond wears a clown disguise and infiltrates a circus.

Fortunately, the movie makes up for it with a thrilling finale. Captured with dazzling aerial cinematography, 007 hangs off the side of a plane in mid-air.

After the release of George Lucas’ Star Wars changed blockbuster cinema forever, the late ‘70s brought a slew of movies set in space – including one starring James Bond. This trend provided sci-fi fans with the good (Alien), the bad (Battle Beyond the Stars), and the ugly (Moonraker).

Even before Bond goes to space, Moonraker is one of the most unashamedly ludicrous films in the franchise. When Bond drives a gondola out of the canals of Venice and onto the street, a pigeon does a double-take. The movie culminates in a big, ridiculous laser battle in outer space.

NEXT: 8 Most Emotional James Bond Movies

Next
10 Movies That Should Have A Making-Of Documentary, According To Reddit