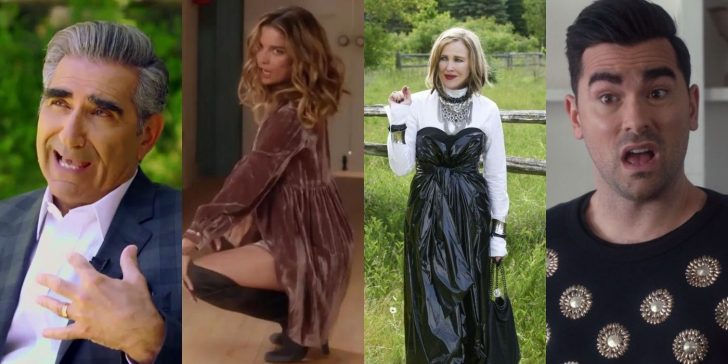 The Rose family fell from grace after their money-hungry business manager got them in trouble financially, losing them their homes, money, and lifestyle. With their only asset being the town of Schitt’s Creek, the family moved from their mansion to a small motel in the middle of nowhere.

RELATED: 10 Of The Funniest Times The Schitt’s Creek Characters Bickered

In “Tailgate Party,” the Roses were new to Schitt’s Creek, and Alexis would do anything to make out with someone and post it online to make her ex-boyfriend jealous. Stevie invited Alexis to a tailgate party, but it became clear that Alexis had no idea what that meant.

While everyone else was dressed in jeans and t-shirts, Alexis’ LBD outfit was glamorous but impractical. David also had no idea what shot-gunning a beer entailed. The two did not fit in and stuck out like sore thumbs. And while Alexis didn’t seem to care about the attention, David looked embarrassed.

The Food They Expected At Cafe Tropical

Cafe Tropical was one of the only places to eat in Schitt’s Creek. The Roses were stunned when they first dined there because of how big the menu was and how different the diner compared to their high-end restaurants.

Some of the show’s more memorable scenes were at Cafe Tropical because it was where Johnny brainstormed about what to do next and where Moira sulked. Alexis didn’t always trust the food, so she was seen sipping “surprise me” smoothies and hot water. Likewise, the family was always dressed formally for a casual setting.

When David started working at the Blouse Barn, Wendy the owner gave David full reign of designing the store and bringing in clothes that people would want to wear.

David proved himself to be a hard worker but he was out of touch when it came to the business side of things. He started buying nice things for his room with money from the store and claimed he was writing all of it off for tax purposes. This scene with his dad had some of David’s best quotes on Schitt’s Creek. As a businessman, Johnny had to educate his son and tell him what a tax write-off was. David was in over his head and thought he would be reimbursed… but by whom?

When the Roses first got to the motel, they were stunned by its appearance and offerings. Everything from the motel’s decor to its smell didn’t make sense to them.

RELATED: 10 Things That Make No Sense About The Rosebud Motel On Schitt’s Creek

Since Stevie was the motel’s only employee, she had the luxury of answering all of the Roses’ questions and seeing them squirm in a new environment. Moira and Johnny were freaked out by the leaking ceiling, the family members were concerned by the thread count of their sheets, David wanted a business center, and Alexis assumed there was a spa attached. Considering this was a street-side motel in the middle of nowhere, the Roses had unrealistic expectations.

The Roses’ Outfits Were Anything But Practical

In a town where most people make their living doing manual labor, it was hilarious that the Roses wore such extravagant clothes. Johnny was always in a suit, Moira looked like she was ready for a red carpet, Alexis sported a variety of cocktail dresses, and David wore sweaters in every climate.

When Alexis had to do community service outside in the heat, she continued wearing cute clothes and accessories, even when she was picking up trash. Johnny also wore his suits when cleaning up around the motel. Later when Alexis worked at Ted’s vet clinic, she tried spicing up her scrubs by cutting them into shorts and wearing heels. As beautiful as the Rose family was, their wardrobe never fit in with the town.

It didn’t take long for David to realize he needed a job after being in Schitt’s Creek for a short time. The problem was he had no idea how to get one. He told Stevie he was interested in art but the only opening in Schitt’s Creek was for a bag boy at a local grocery store.

Of course, David had no idea what a bag boy meant. He also assumed the minimum wage was around $45 an hour. After bagging people’s items for an afternoon, David quickly realized he didn’t have what it took and quit on the spot. This was one of the funniest Schitt’s Creek episodes because David was so out of touch with reality in terms of money and employment.

Alexis Goes Back To High School

When Ted encouraged Alexis to go to college, she realized she had to complete high school first as she never earned her diploma. This meant she had to go back to high school in Schitt’s Creek.

RELATED: 10 Hilarious Stories From Alexis’ Past On Schitt’s Creek

It had been years since Alexis was in school, so she was out of touch with the way schools were. She tried showing off in class by sharing stories from her past, she wore eye-catching outfits to be a trend-setter, and she was disgusted when she contracted lice from another student. Alexis had no idea what it meant to be popular in school all those years later.

David Had No Idea How To Work An ATM

Johnny and Moira used to be incredibly successful but now that they didn’t have much to their names, they relied on David and Alexis to help them. Since David was the only one with an income, he had to lend his dad some money.

However, David had no idea how to work an ATM because he never set up the code for his bank card. After arguing by the ATM for quite some time, the duo had to go inside to figure out the problem. As it turned out, David didn’t know he had to use the generic PIN first before changing it.

The Family Portrait Inside The Motel

The one thing that the entire Rose family wanted in Schitt’s Creek season 1 that eventually came true in the end was to be out of the town and successful again. Before their dreams eventually came true, they were reminded of the life they once had when their family portrait was delivered to the motel.

The portrait was massive and showcased them in their former glory. However, the idea of keeping it in the motel lobby was out of touch. For starters, the portrait barely fit in the motel but it was also not the Roses’ motel — it was Stevies. It wouldn’t have made sense to have it showcased.

Moira’s outfits were always expensive. It didn’t matter if she was at Cafe Tropical or running to Rose Apothecary to visit David; Moira was always dressed like there were paparazzi around.

Not only were her outfits over the top, but Moira was also out of touch when it came to outings in the town. She took over a funeral she attended by singing “Danny Boy,” she acted as the director of the Jazzagals practices,  and she was out of touch as a town councilor. Even in Schitt’s Creek, Moira acted better than the town.

NEXT: Moira’s 5 Best Pieces Of Advice On Schitt’s Creek (& Her 5 Worst)

Lynn is a nomad who travels the globe on the hunt for her next adventure with her husband. A lover of being outside (and finding the best latte in town), Lynn is typically hiking, walking, or jogging when she’s not focusing on her love of writing. When it comes to shows streaming on Netflix or anything Bravo-related, Lynn’s your gal.