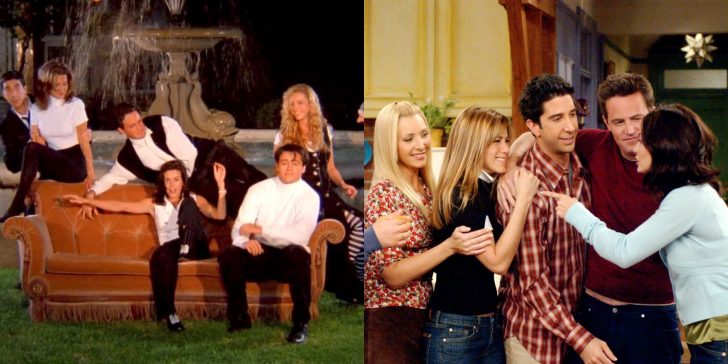 Although most Friends fans remember the sitcom best for its iconic relationships, its quirky characters, and hilarious dialogue, there are a few that are now beginning to appreciate the opening titles. Whether it is because of the cast dancing in the fountain, the memorable claps, or the catchy theme song, fans have loved how much hard work went into creating the credits.

RELATED: The 15 Best Episodes Of Friends Ever, According To IMDb

However, do fans know how they came up with the idea or spot all the little details they included? With the series often found on streaming platforms, like Netflix, it’s easy to understand why some fans might have overlooked them since there are a few who like to skip past the opening title sequence. But if fans do decide to do a rewatch and want to take a closer look at them, they might come to appreciate the show even more.

Updated on February 24th, 2022, by Kayleigh Banks: After their reunion broke viewership records in the UK, it’s safe to say that Friends remains one of the most popular sitcoms to date.

Whether it’s because of its relatable characters or because it has provided viewers with plenty of comfort and laughs, many fans love to rewatch the series and learn all the little details about it. That’s why some fans might find this the perfect opportunity to refresh their minds or learn about the hard work and effort the editors put into the opening title sequence.

The Rembrandts Wanted To Remain Anonymous Initially After Watching The Pilot

Although The Rembrandts will forever be grateful to the show for propelling them further into fame, initially, they wanted to remain anonymous after watching the pilot while working on the tune.

In an interview with Variety, Phil Solemn explained that “in those days, it was uncool for a band like ours to be involved in television.” He also said that they weren’t very happy about being asked to extend the track into a full song since they “were making a dark, heavier rock album – (which was) the antithesis of Friends.” However, considering that it is now remembered as one of the most iconic theme songs in sitcom history, they’ll probably be glad they took up the project.

When the show was first on the air, the opening credits lasted for about a minute and 32 seconds. However, as time went on, the showrunners were seen to cut it by half (or they would speed it up). Although some fans might not have made much attention to this, there was a specific reason.

“Friends originally aired when commercial breaks were shorter than they are today,” a TBS publicist had said (as sourced via the StarTribune). “To fit an episode into today’s standard half-hour time slot without sacrificing any of its storylines, the opening theme is sometimes trimmed.”

The Claps Are Sometimes Synchronised With Moments From The Show

If there is one thing about the show theme song that is most memorable, it is the claps. Whenever fans hear it, they feel compelled to make the sound (as if it becomes engrained in the viewers’ heads). However, while fans had been focused on that, they might have not have noticed how the showrunners sometimes synchronized the claps in with some of the clips.

For instance, in season 4’s opening credits, it is synchronized with Chandler tapping his head. In season 5, it matches him shaking his hand. In season 6, it is when Monica is patting her stomach, and in season 8, it is when she points to her cheek several times. Although it doesn’t work all the time, it seems to suggest that the showrunners are aware of the viewers’ compulsion to clap.

The London Episodes Had A Special Opening Credits

There were two episodes in season 4 that briefly changed their opening titles and that was “The One With Ross’s Wedding.” In this two-part finale, the showrunners had swapped the original opening title to one that documents the gang’s time in London.

Since the original sometimes showed the New York landscape and a few of the city’s landmarks, it made sense that the title sequence changed to inform the viewers of where the following episodes would be set. If fans also take a closer look, it also contained a spoiler as it revealed that Rachel would be flying to London. Although hardcore fans might not care much about that, some of the show’s newest viewers might.

Since the majority of viewers tend to rewatch Friends on Netflix, odds are that they skip the introduction so they can get into the main action. That’s probably why this tiny detail might have just slipped under the radar.

In the early stages of the show, Matt LeBlanc’s name seems to be spelled differently to what it was is now (“Matt Le Blanc”). While some might believe that it could have just been an error, there’s also a possibility that LeBlanc just changed his ‘stage’ name since he was credited as “Matt Le Blanc” in Vinnie & Bobby.

The Fountain Isn’t In Manhattan

The famous fountain that appears in every intro of Friends isn’t actually in Manhattan. In fact, it isn’t even in New York. The fountain was actually in Burbank, California, at the Warner Brothers’ ranch (via The Hollywood Reporter).

However, if there are some who are wondering if they can go and visit it, then they do not need to worry. As of 2019, the iconic fountain has been moved to the main lot, where it sits in between French Street and Warner Bros.’ Embassy Court.

The Famous Theme Song Was Going to be Totally Different

It’s no secret that hardcore fans of the show know every word to the infamous song and they certainly can’t really imagine it being anything else. However, it almost was. The original tune for the show was set to be “Shiny Happy People” by R.E.M. (via Independent).

However, they passed on the project, which meant they had to find another band that had quite a significant following. This is why one of the show’s producers, Kevin Bright, then brought The Rembrandts into the discussion and asked if they could help create a song that was similar in tone. Although “Shiny Happy People” is a great song, it doesn’t exactly fit the tone or atmosphere of the show considering some of the Friends’ storylines involved some serious and deep discussions.

The Creators of the Show Co-Wrote the Theme

Some fans might be shocked to discover that the show’s theme song, “I’ll Be There For You,” was only partially written by The Rembrandts. It was also co-written by the show’s musical director, Michael Skloff, and lyricist, Allee Willis (via Independent).

Danny Wilde and Phil Solem, the men behind the group, actually admitted that they had very little to do with the writing of the song. Although the figure isn’t known, the group did take home some royalties, with Wilde admitting that the financial benefits have “managed to put both [his] kids through college.”

The Opening Credits In “The One After Vegas”

The season 6 premiere had a very special opening credits scene. This was the first episode to air after Courteney Cox married David Arquette, and was adamant about having her second name added to the opening credits.

Of course, to pay tribute to this special occasion, the rest of the cast followed suit. Every cast member’s name in this opening credit scene is followed by the surname “Arquette.”

Jennifer Aniston Didn’t Like The Theme Song Or Original Introduction

According to Jennifer Aniston, the entire cast actually didn’t like the theme song (via Independent). She also admitted that she wasn’t a fan of the “dancing in a fountain [either since it] felt sort of odd” but they nevertheless went with it since the directors had a creative vision in mind.

To be fair to Aniston, it wasn’t just them who didn’t fully understand the title sequence since the NBC boss at the time wanted [it] gone and replaced with “clips [like those in] Laverne & Shirley” (via Digital Spy).

The popular song by The Rembrandts actually became a #1 single on the American pop charts. It hit #1 on the “US Mainstream Top 40 Billboard” (via Billboard) and also took a weekly #1 spot in Scotland and Canada.

It also hit the charts in almost 10 countries and topped the “Billboard Hot 100 Airplay” chart for eight whole weeks. Quite a huge achievement if fans really think about it.

Apparently, Danny Wilde and Phil Solem (The Rembrandts) had nothing to do with the clapping. The famous clapping is actually done by the show’s producers (as sourced by The Indian Express).

Wilde also claimed that it took over 25 takes for the three producers to get it right. The crew worked for three days in the studio finalizing the piece before it aired on television. Apparently, it took a village to write this hit, but the viewers are more than satisfied with the final product.

The How-Many-Claps Debate Was Settled by The Rembrandts

Apparently, the question of how many claps ACTUALLY appear in the Friends intro has created quite the controversy. Even the cast struggled with remembering how many claps they were to actually do.

In fact, on Jimmy Kimmel, Courteney Cox even did the wrong number of claps. However, Danny Wilde and Phil Solem settled it when they did an interview with BuzzFeed, and the verdict is FOUR claps (not five). This will certainly help bring some closure to a few fans.

Matthew Perry’s Infamous One-Liners Kept Up Morale During the 4:00 am Shoot

It’s not surprising that the cast struggled to keep their spirits up during the shooting of the title sequence, especially since it was 4 am and they had to play in a freezing cold fountain, acting like it was the best time of their lives.

However, it wasn’t all a misery. In an interview with PEOPLE, Lisa Kudrow revealed that Matthew Perry helped keep up spirits. “I remember it being cold, and we had to do it many times,” she had said. “I don’t think we were in the mood or could even look like we were having fun anymore, but then Matthew Perry said, ‘I don’t remember a time when I wasn’t in the fountain’ and we laughed so hard.” Given that Chandler had some of the best quotes on Friends and plenty of hilarious one-liners, it’s likely that Perry’s charming personality and witty delivery helped make the character as lovable as he is today.

NEXT: 8 Characters Who Were Well Ahead Of Their Time On Friends

I just graduated university with Criminology & Psychology, but have a burning side passion for film! I am an avid reader, writer, and film-goer, and I love learning about movies, actors, directors, and sharing my passion and knowledge with others.
I am a List Writer for ScreenRant, and love being a part of a film community where we all share the same passions.