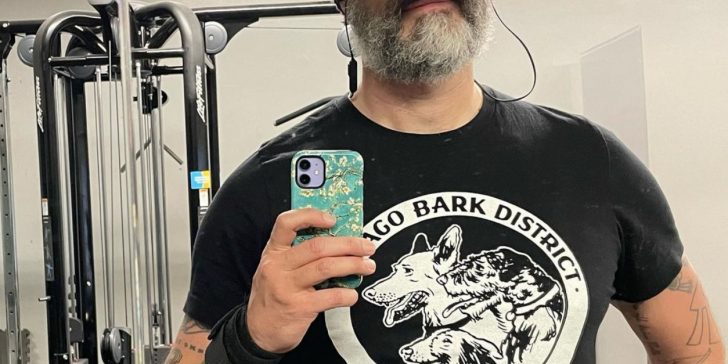 Welcome to 5 Questions, a new column where we ask games developers, writers, and others involved in the industry questions that have nothing to do with games. In this first edition, I spoke to designer Josh Sawyer of Obsidian Entertainment, who has worked on titles like Icewind Dale, Fallout: New Vegas, Pillars of Eternity, and The Outer Worlds. You can follow Josh on Twitter at @jesawyer.

I wake up around 6:45 every morning, feed the pets, make breakfast, and either go to the gym to lift weights or shower and get ready to ride my bike to work.  If I go to the gym, I leave my house no later than 7:45 so I can be back home to shower by 9.  If I ride my bike to work, I leave no later than 8:30.  I’m aiming to get to work sometime between 9:45 and 10.  There’s also probably a good 15-30 minutes of social media scrolling/goofing around and doing odd chores like washing dishes or emptying my cat’s litter box.

My weightlifting routines are always about 1 hour, give or take 5 minutes.  My bike rides are 1 hour to 1 hour 15 minutes, depending on what bike I’m riding.  I’m trying not to work up a gnarly sweat, so I keep it party pace, about 12 mph.

Breakfast is routine: either a toasted bagel with cream cheese on one half and peanut butter on the other or Bob’s Red Mill Scottish oatmeal with banana, agave syrup, and peanut butter.  No matter what, I’m drinking a big mug of double bergamot Earl Grey tea with lemon honey and soy milk.  If I lift weights, I have a protein shake and two eggs right after I get back.

What are some things you use everyday that you’d enthusiastically recommend?

I wear conventional mechanical wristwatches. They’re kind of stupid but they allow me to keep my phone in my pocket, which is generally better for me and the world. They’re fashion accessories, but there are some functions I do find useful. A lot of my friends and some of my colleagues work in Europe, so I have a GMT watch to track an additional time zone (usually Central Europe). I also find countdown bezels useful in everyday circumstances. I think a lot of people find the countdown timers on their phone useful. Countdown bezels are useful in the same way, but you can just set it on your wrist and check progress without needing to grab your phone.

Since I’m back in the office now, I’m getting back into using my Field Notes notebooks. I used them extensively on previous projects.  Again, they’re just use for jotting things down. Even if I never reference them again, the act of writing them helps me remember.

The last thing I’d recommend is a bike, new or old, electric assisted or conventional. I’m glad I’m finally able to get back into bike commuting. It’s a lot of time, but it’s a lot more enjoyable and I like using the time to let my thoughts wander. We’re currently in a bike boom, which can make bikes and parts hard to come by, but I still recommend getting into cycling as a casual activity.

Read any good books lately? Listen to any good records?

I just picked up The German Volksbuch by Albrecht Classen. It’s a history book that looks at the explosion of (mostly) German-language books aimed at the “mass market” in the early era of European printing (1450-1650). It’s something I find interesting because the subject matter of these books was quite wide and it helped promote rising literacy across strata of society that previously were largely illiterate. Not really a page-turner but this is the stuff I usually go for.

I recently picked up Justice’s Cross on vinyl and it’s really fantastic. Not a bad track on the album. I also found a bootleg Genesis album from a concert they gave in Montréal in 1974, L’Ange Gabriel. Have I listened to it yet? No. Does the album art look really nice displayed in the bin? Yes.

What’s an item of clothing you’re really into right now?

I have pretty simple tastes when it comes to daily clothing. I generally wear graphic tees and slacks. My friend Elisse co-founded a service for dog walking and cat care called Chicago Bark District. I bought one of their t-shirts to support them and because I has a nice design. It’s also comfy and almost manages to make me look fit.

What’s one thing you’d like to do more of?

Go camping. I love doing it and I have both a camper van and a couple of touring bicycles. I fell out of the habit due to COVID making campsite access really chaotic. I need to get back into it.