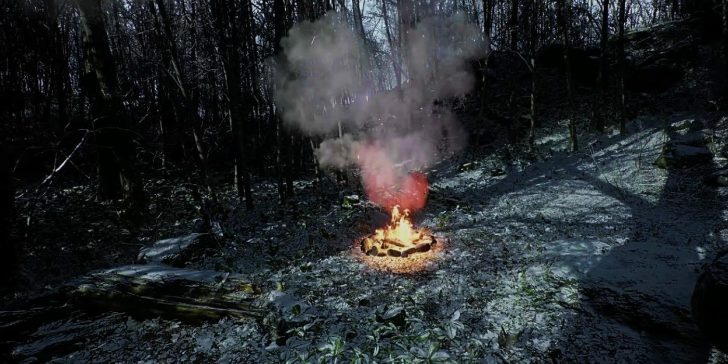 Developer Blue Box Game Studios has deleted tweets teasing future plans for its survival horror game, Abandoned, leaving many to ponder whether the title will ever see the light of day. This supposed PS5 project now seems like little more than an urban legend, though it managed to generate an unbelievable amount of hype throughout much of last year. Blue Box unveiled Abandoned in April 2021, complete with a teaser trailer consisting of borrowed assets as somewhat of a proof of concept.

The development team talked a good game, though, so much so that social media hints sparked a conspiracy that Hideo Kojima may be pulling a long con reminiscent of Metal Gear Solid V or P.T./Silent Hills. Kojima himself never publicly addressed the speculation, yet Blue Box clarified on numerous occasions that its work in no way bore a relation to the MGS creator, Konami, or the long-dormant Silent Hill brand. Those wrapped up in the mystery had hoped the studio’s release of a playable trailer would clear up any and all lingering confusion. However, nothing came of Abandoned’s PS5 app reveal – apart from another peak at previously released teaser footage. While the studio later announced plans to rollout a gameplay trailer and Prologue Chapter, these promises have also yet to bear fruit.

As spotted by Twitter user and modder Lance McDonald, many of Blue Box Game Studios’ tweets related to future Abandoned plans no longer exist. Tweets from a few months ago about a playable demo have vanished, for example; so, too, have posts regarding an explanation as to why the trailer app required a 5GB download. At the time of writing, the earliest tweet featured on the account dates back to the Abandoned team’s clarification about Kojima in June 2021. McDonald isn’t the only person who noticed something strange, either. Twitter user F4ST3X, a vocalist for music act Eyes Inside, claimed he and his crew were contracted by Blue Box to work on music for the OST in August 2021. Apparently, the musicians spent 50 to 60 hours on the project, yet never received compensation as Blue Box continuously delayed Abandoned and seldom communicated.

BLUE BOX Game Studios have now deleted most tweets that described specific future plans for their game “Abandoned”. 3 months ago they said there would be a playable demo “soon” and also …

We worked like 50-60 hours on this song. They said: This song will be in the game – and maybe in a teaser.

Every 6-12 weeks I get an email with: Sorry for the huge delay etc. We will work with a one-time fee etc.

In the past, internet super sleuths have uncovered information suggesting Blue Box Game Studios and Abandoned warrant recognition as little more than a scam. This is due in large part to a Kickstarter project that allegedly garnered outside funding from elsewhere, then never came to fruition. The team’s other failed endeavors have been called into question, as well. Abandoned lead Hasan Kahraman denied the scam allegations, but the above details from the Eyes Inside vocalist imply the claims may demand closer inspection.

Of course, one question – outside of the obvious ones – continues to linger: Why did Sony Interactive Entertainment sink so much of its marketing power into Abandoned? Sure, Sony’s previously backed infamously terrible experiences like Life of Black Tiger. But that development crew never received a dedicated app on PlayStation hardware. In the end, it seems the story behind Abandoned will prove far more intriguing than whatever the supposed game itself has on offer.

Abandoned is supposedly in development for PS5.

90 Day Fiancé: Why Mahogany Uses A Translator To Speak With Ben