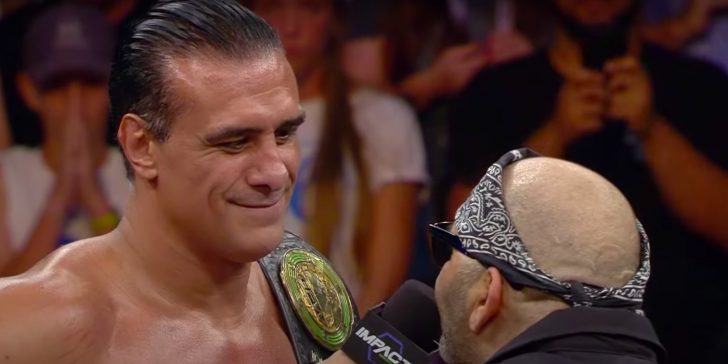 The AAA insider said that Laredo Kid’s partner was originally supposed to be Daga, but visa issues led to a change of plans. El Patrón was chosen because AAA booker Konnan “felt like he needed a big star, a big surprise.” There are allegedly no “long-term” plans for El Patrón in AAA right now, but “there had been rumblings that he would be back in AAA eventually.” According to our source, El Patrón’s Triplemanía appearance has been in the works for over a week.

Alberto El Patrón began his professional wrestling career in AAA in 2000 as Dos Caras Jr. He signed with CMLL in 2005 and didn’t return to AAA until 2014, when he worked there for a year between his two WWE runs. A match at Triplemanía this spring would make AAA the first major promotion to work with El Patrón since he no-showed the Impact Wrestling vs. Lucha Underground event at WrestleMania weekend 2018, and since he was arrested for allegedly battering and sexually assaulting his girlfriend in May 2020.

El Patrón’s May 2020 arrest and the allegations made against him at the time were covered in detail by San Antonio NBC affiliate WOAI and by TMZ (the content of these linked articles is graphic and may be upsetting to readers). He was later released on bail. El Patrón was indicted on one count of aggravated kidnapping and four counts of sexual assault in October of that year. The trial was postponed multiple times before the charges were dropped in December 2021 because of “a missing witness.”

In November 2020, while El Patrón’s trial was pending, former WWE wrestler Paige, who dated him from 2016 to 2017, attributed the charges to “karma” and described being abused by El Patrón during their relationship. El Patrón told TMZ that “It was the other way around” and that he was considering legal action against her. The next month, El Patrón’s alleged victim apologized to his family in a since-deleted Instagram post. In August 2021, El Patrón said that he was “just waiting” for the state to drop the charges.

Since he was released from WWE in August 2016, El Patrón’s career has included other legal issues, multiple promotions cutting ties with him over no-shows, and a scheduled Triplemanía match that never happened. In 2017, he was suspended by Global Force Wrestling while he and Paige were invested for possible domestic battery. In 2018, he was scheduled for a Triplemanía match but ended up not appearing on the show because of either financial and booking disagreements (according to El Patrón) or lack of communication after El Patrón no-showed the Impact Wrestling vs. Lucha Underground event weeks before Triplemanía (according to AAA director Dorian Roldán).

El Patrón wrestled much less in 2019 than he had in previous years, and since his May 2020 arrest, he’s only worked a handful of matches. However, he’s still gotten in the ring with major stars including Pentagon Jr., Dr. Wagner Jr., LA Park, Bandido, and Blue Demon Jr. since then. He’s also been involved in the founding/running of two different wrestling promotions: Nación Lucha Libre, which ran from 2019 to 2020 and promoted in a comeback in 2021  headlined by El Patrón vs. Andrade that has yet to happen; and Robles y Patrón Promotions, which began in July 2021 and has so far held two events.