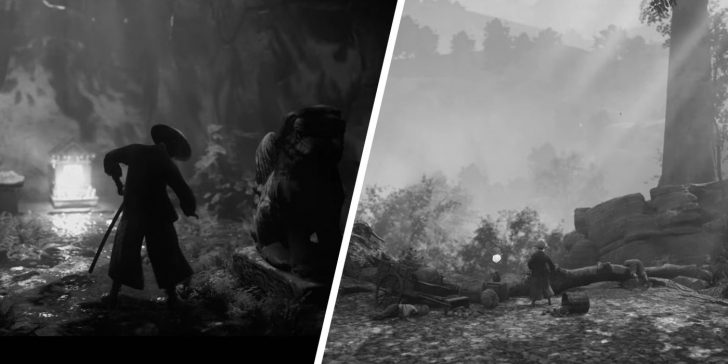 In Chapter 2 of Trek to Yomi, samurai adventurers can discover thirteen Collectables hidden across the various areas of the linear world.

Chapter 2 in Trek to Yomi features a total of six Artifacts, four Stamina Upgrades, two Health Upgrades, and one Bo-Shuriken Capacity Upgrade. Naturally, the Upgrades are undoubtedly advantageous for combat, and the Artifacts can be satisfying to collect. Yet, those aiming to reach “Platinum” or 100% Achievements in the game need to locate and pick up all of these Collectables in Trek to Yomi.

It should be noted that the dense and darkened monotone contrast of the Trek to Yomi’s visuals can make it rather challenging to spot minuscule Collectable objects hidden throughout the environment. Fortunately, most of these items will frequently sparkle with a single shimmer of light at their exact location. Therefore, players should make sure they keep a close eye out for these bright flares throughout the levels and be careful not to stand in any camera-fixed positions that might block a portion of the visual area.

Furthermore, whenever Trek to Yomi adventurers are close enough to a Collectable, a small flashing circle will appear directly above the object. With this mechanic in mind, players will be able to know when they are close enough to an item to pick it up or if they need to change their position in Trek To Yomi.

Every Artifact & Upgrade In Trek To Yomi Chapter 2

First, here are all the Artifacts that Trek to Yomi players will be able to find in Chapter 2:

Artifact 1: Discarded Kami Carving – After the combat sequence with the shadow bandits, continue to the right until reaching a small covered shelter nearby audible bamboo windchimes. The Discarded Kami Carving is atop a pile of straw in the shelter.Artifact 2: Crude Tekko – The Crude Tekko can be found within the cave on a wooden platform near some crates. To reach it, knock down the beam at the back of the room to form a bridge.Artifact 3: The Three Monkeys – After exiting the cave, go down a dirt path marked with a torii gate. Follow the trail to the end to find The Three Monkeys.Artifact 4: EMA – After reaching the two carts in the burning village section in Trek To Yomi, head to the right and towards the front left of the camera to find the EMA Artifact atop bales of hay.Artifact 5: Lost Love Letter – On the left side of the village, enter a home with a wounded man lying on the floor, grunting in pain. Pick up the Artifact on the table to receive the Lost Love Letter.Artifact 6: Mori Shio – After kicking through barn doors, continue down the village path to the right until reaching a lit brazier. From here, go down the path towards the camera to find the Mori Shio atop a small stump.

Next are all the available Upgrades in Chapter 2 that adventurers can discover along their journey:

Next: Trek To Yomi Looks Like A Tarantino Movie

Trek to Yomi is available on PlayStation 4, Xbox One, PlayStation 5, Xbox Series X|S, and PC.

Poppy Playtime: Chapter 2 – Where to Find The Collectable Statues