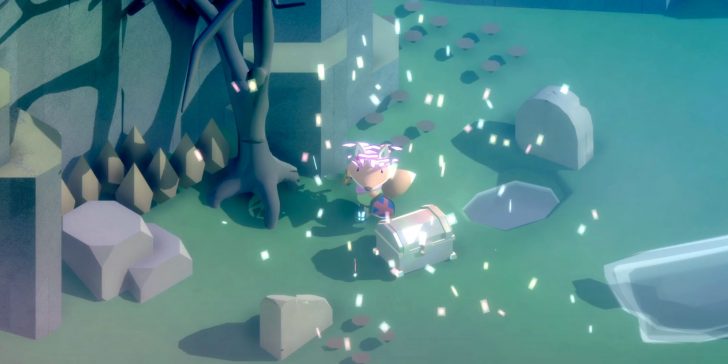 Tunic contains 12 Secret Treasures that can be collected to get 100% completion in the game, and each one has an associated achievement.

Many of the Secret Treasures will require players to have the teleport dash ability unlocked. After collecting the green, blue, and red gems in Tunic and delivering them to the Sealed Temple, the story continues with an unexpected twist to the story. A new path leading to the Cathedral will be available from the southeastern bridge in the Overworld. Once the Cathedral is completed, the fox will have a purple halo item that allows them to warp over small gaps.

To collect every Secret Treasure, players will also need to have the magic weapons unlocked, and every Fairy in the game will need to be collected. Fairies are another set of secret collectibles that can be tracked down using the clues throughout the instruction booklet. Since all of Tunic’s collectibles are connected, it’s recommended that players hunt for these items simultaneously to avoid as much backtracking as possible.

How To Spawn Every Secret Treasure Chest In Tunic

In order to obtain every Secret Treasure while adventuring in Tunic, players will need to complete the majority of the game, including finding instruction pages, acquiring the teleport dash ability, and locating all 20 hidden Fairies. The Secret Treasures can be displayed on pedestals by entering the Old House, accessing the secret area to the north, then going down the hall and walking south to enter another hidden area. Once at least six of the 12 Secret Treasures are added to the display room, a portal will open up to take players to the last unlockable area in Tunic, the Glyph Tower.

Back to Work: There’s a Tunic warp point near the beach where the fox first spawns. Page 11 can be used to find clues for this Secret Treasure. While standing on the golden platform, the Secret Treasure can be revealed by entering right, down, left, up, left, left, down, right, right, down, down.Sacred Geometry: A Secret Treasure can be found outside the Windmill shop in the Overworld by using the patterns on the sails to find the solution hinted at on page 53. The solution is down, left, left, up, up, right, right, left, down, right, up, down.Power Up: There’s another Secret Treasure just outside the Old House near the windchimes. The clues are on pages 28 and 34, and the solution is up, down, right, up, down, left, up, down, left, right, down, left, right, up.Mr. Mayor: At the beginning of Tunic, there’s a locked door near the East Forest entrance that can be opened using a key found in the Overworld. Inside the room, there’s a line puzzle on the wall. To open the passage, players can enter right, up, left, up, right, down, right, up, left, down, left, up, right, up, left, down. The Secret Treasure is behind the wall.Vintage: The clues for this Secret Treasure are on pages 1 and 51, and it’s located just south of the beach near the Ruined Atoll bridge. The fox will need to be standing in the puddle that the thin path of sand wraps around. From the pause menu, players will need to lower their master volume in the audio options to zero. The game should then be unpaused, and players will need to wait for 60 seconds in the puddle. After a minute passes, a new note will appear on page 1 of the instruction manual in Tunic. The note will reveal that players can stand on the edge of the island where the sand meets the grass and press down, right 11 times, then left 12 times.Regal Weasel: For this Secret Treasure, players can look on page 53. The magic dagger, magic staff, and magic orb are needed to obtain this collectible. Once the necessary equipment is obtained, players can go down the hidden path directly to the left of the golden platform in the East Forest. In the Lower Forest area, players can turn around at the first grapple point and look up to spot an enemy on a square ledge. Tunic’s magic dagger and wand need to be used simultaneously, then the magic orb can be used to bring the fox up to the ledge. The Secret Treasure is in an alcove behind the enemy.

Dusty: From the main floor of the Eastern Vault, there’s a path on the right side that leads to the Hero’s Grave. Using the teleport dash, players can jump across the ruins to the left of the stairs below the Hero’s Grave. Inside the secret room, the four piles of leaves can be destroyed, then the Secret Treasure will appear.Forever Friend: After obtaining the teleport dash and returning to corporeal form, players can head to the fast travel central hub, then go to the bottom tip and dash to the left along a hidden path leading to this easily missed Secret Treasure.Phonomath: To the left of the large statue at the center of Ruined Atoll, there’s a set of hooks that the fox can grapple to. At the end of the hook path, players can cross the wooden bridge, then head west and teleport dash across the gap between two low brick walls. The Secret Treasure is at the other end of the island across the gap.A Secret Legend: Before searching for this Secret Treasure, players will need to sleep in the Old House to change the game to nighttime. This also needs to be done after finding the gems in Tunic, then regaining corporeal form. At night, players can head to the Cathedral, which can be accessed by taking the southeast bridge in the Overworld to the Swamp. The room to the left of the Cathedral entrance has a secret door behind the ladder. Players will need to walk up and interact with the wall to open it. This leads to one of the game’s hidden chests and another wall that can be opened up by interacting with it. At the end of the next area, there’s a puzzle on the wall and the solution is left, up, left, up, right, up, left, up, right, down, right, right, up, right, down, left, right, down, left, down, left. This will open up a new path leading outside the Cathedral to a small balcony. Next, players will need to return to the Old House to change it back to daytime. Outside the entrance to the Cathedral, there’s a ladder on the right side that will lead to the balcony where the new path was unlocked. Finally, players can enter the room and collect the Secret Treasure.Just Some Pals: There’s a hint for this Secret Treasure on page 39, and players will need to have access to the Swamp during the day. Near the closed gate, there are some pillars that the fox can jump across using the teleport dash ability, which is unlocked by defeating the boss in Tunic’s Cathedral. Once on the other side of the fence, head north to the raised platform with the chest and ladder to find a golden skull. Knock the first one off the side of the ledge by walking into it, then continue north along the path to reach the lower area where it landed. There are a total of four golden skulls in the immediate area, and they all need to be pushed into the small hole in front of the grave upon which the second golden skull sits. When all four skulls are knocked in, the Secret Treasure will be revealed.Spring Falls: This Secret Treasure is a reward for collecting every Fairy in Tunic and returning to the secret room behind the large waterfall in the Overworld.

Next: Every Way Tunic Is (& Isn’t) Like The Legend Of Zelda

Where To Find The Red Gem in Tunic