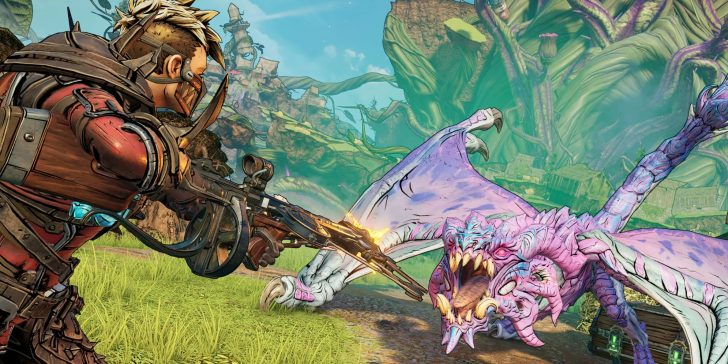 While the core aspects of this looter-shooter franchise remain, Wonderlands differentiates itself in a number of ways. Perhaps the largest is the hub world that players can run around in third person. Not only does let you reach specific destinations but partake in a variety of quests tied to the NPCs scattered throughout. One of these is the Shrine of Throatus Punchus, which tasks you with finding four shrine pieces scattered throughout the world

Your first piece for Throatus Punchus can be found up the hill to the left of where Margravine is standing by the invisible bridge. Go up the hill until you reach a fork in the road and go left through the brush. You will see a mine shaft along the wall, which is a dungeon that contains a shrine piece. Broken up across two encounters, this dungeon is entirely pirate enemy-focused and does not contain a boss.

So back to where Margravine is and take a right this time. You will see another dungeon cave entrance, but this one is much closer. Also broken up across two encounters there are no bosses to face, but you will be against an entire room of Klomps which can be pretty annoying. After defeating the last room, grab the shrine piece before you exit the portal. Two left, two to go!

To access both the third and fourth shrine piece you will need to complete the Mortal Coil main story quest. This quest is located in the Drowned Abyss, an area that can only be accessed after you finish Margravine’s quest for the telescope that lets you see invisible bridges. Once you have completed both quests and exited out the other side, take a right down the hill. You will see another glowing dungeon door nestled along the wall just past some coral. Inside is a three-part dungeon that will include a boss at the end. Vanquishing this boss will grant you the third Throatus Punchus shrine piece.

The final piece of the Throatus Punchus shrine is located to the left when you exit from The God’s Well. Go up the hill and you should see a cave entrance right by the NPC offering a side quest. This is one of the easier dungeons, as it only contains two rooms and it’s just sea creatures like sharks and crabs. Upon finishing this dungeon, grab the last shrine piece and head back to the Throatus Punchas shrine. Interacting with it will grant you the critical hit buff for the rest of the game, which can be really nice for specific weapons or builds!