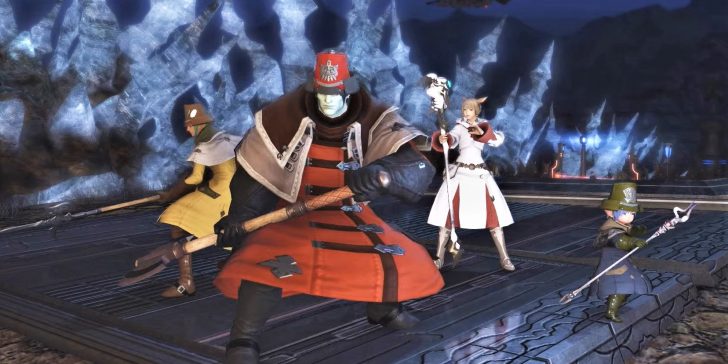 In February’s Live Letter, director and producer Naoki Yoshida detailed how Final Fantasy XIV is getting significant changes to the base game A Realm Reborn. This latest Live Letter dug much deeper into that, showing us how the new Duty Support system works and how MSQ dungeons are being revamped. And consequently, the Main Scenario Duty Roulette will change as well. We’ll summarize everything it in detail here. As previously revealed, all of the older main story content in FFXIV would be retrofitted with the Trust system. This will be a separate version of the system under a new name. It’s called the Duty Support system and is specifically for running instances for story purposes. The existing Trust system will apply to the character avatars you level up from Shadowbringers and on.

It’s very much the same, giving you AI-controlled party members to run dungeons with instead of real players to support a solo experience. You’ll be mostly taking generic NPCs into these instances. Yoshida-san mentioned that it was hard to include the Scions for story purposes but the team did consider which NPCs players would want to see most. NPCs will be chosen automatically depending on your character’s role. Of all the duties being changed in A Realm Reborn, The Praetorium is getting the biggest overhaul. It will be broken up into three separate instances — a four-player dungeon, a four-player trial, and a solo fight. Such devastation (it was, in fact, their intention). Castrum Meridianum is changing from an eight-player dungeon to a four-player dungeon, and word on the street is we won’t have to wait around for Cid anymore. We’re not sure if in-game cutscenes will be changed, however. We already knew that Cape Westwind was going to go from the hilariously short eight-player trial to a solo instance. If you want to replay anything relegated to being a solo instance, you will have to use the New Game+ system.

Turns out the Garlean Empire ain’t worth all the effort taking down anymore! Because of all the aforementioned changes coming to The Praetorium and Castrum Meridianum, the Main Scenario Duty Roulette had to be tweaked. Yoshida-san said they were considering removing it entirely, but instead chose to adjust how rewards work since these instances will be shorter (but still longer than most others).

The Main Scenario Duty Roulette will still include The Praetorium and Castrum Meridianum, and will also get Porta Decumana (the four-player Ultima Weapon trial).

There will be a handful of other refinements coming to older dungeons. One example given was in Haukke Manor — after beating the second boss in the basement area, a teleporter will show up to take you back to the entrance instead of making players use the Return action. Yoshida-san said it should be less confusing for new players. (Think of the Sprouts!)

We can expect some visual updates to some dungeons, including new textures, but we don’t anticipate anything major. Yoshida-san also mentioned changing Thornmarch (aka Good King Moggle Mog who will tickle your nose and tickle your feet), but said it’s only a thought for now. Eight-player trials are still under consideration for getting the Duty Support system when Patch 7.0 rolls around, but nothing conclusive yet.

For more on this, check out our previous story on the rollout schedule for the Duty Support system that’ll cover all of FFXIV‘s main story dungeons. This latest Live Letter also went into some major changes that’ll improve the glamour system with more plates, dresser slots, and opportunities to use them.