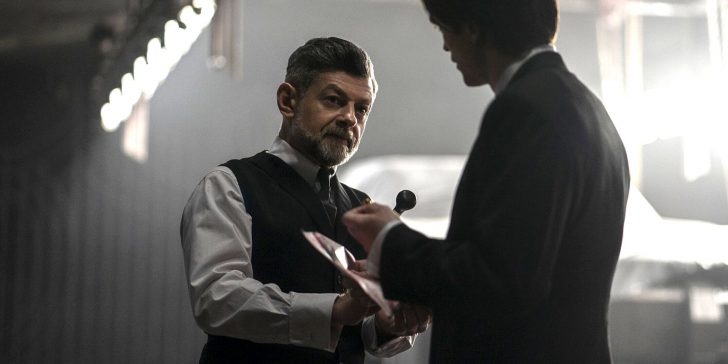 Actor Andy Serkis is praising the filmmakers who made The Batman’s world come to life, saying he’s “never seen Gotham look so complete.”

Anticipation for The Batman has been high as DC looks to reboot the film franchise following previous actor Ben Affleck’s run as the Caped Crusader. Rather than rehash the hero’s origin story, the new film jumps right into Batman’s vigilante work as he investigates a series of murders at the hands of the Riddler. Much of The Batman’s hype stems from what appears to be a promising performance from Pattinson, as well as the grittier tone contrasting with the recent Justice League films. The Batman is also getting praise for its visuals, the work of cinematographer Greg Fraser.

Serkis, too, is crediting Reeves, Fraser and production designer James Chinlund for their conceptualization of Batman’s world. In an interview with Collider, Serkis said Gotham City is like a character in and of itself, reflective of the emotions Reeves wrote into the script. He said:

“Matt is very specific about what he sees. He sees it when he’s writing. It translates out of the emotion of what he’s writing. But Greg — the lighting is just phenomenal … There are so many great shots, but what I will say is, I’ve never seen Gotham look so complete, sort of its own thing and a character in a way.”

If there’s any actor whose résumé boasts significant screen time in imaginative worlds, it’s Serkis, who’s played all sorts of larger-than-life roles ranging from Gollum in The Lord of the Rings to Caesar in the Planet of the Apes series. Gotham City is yet another stylized landscape Serkis got to work in, except this time, the actor was able to experience it without having to wear a motion capture suit. Serkis’ excitement for The Batman’s aesthetics is certainly not unfounded—the footage from trailers and clips have shown Gotham to be appropriately dark and artistically sinister, enough to whet one’s appetite for the rest of the feature film.

Of course, cinematography and design are no substitution for good storytelling — a common critique among DC Extended Universe films as of late. The Batman, however, seems to show a lot of promise on that front. The film debuted with an 89% Rotten Tomatoes score, with many critics praising the plot, acting and noir-style take on the franchise. Some viewers even speculate that The Batman has potential to rise among the ranks of Christopher Nolan’s The Dark Knight trilogy or Todd Phillips’ Joker. Fans will ultimately have the final say when The Batman hits theaters on Friday.

Next: Jeffrey Wright Is Both Right & Wrong About The Batman’s Sequel Villains

The X-Men Character Better For Doctor Strange 2 Than Wolverine