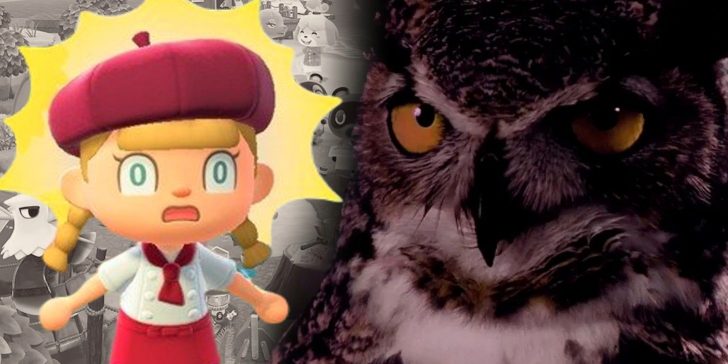 The owls aren’t what they seem in Twin Peaks, but an Animal Crossing: New Horizons player has proven the same in the game with a meme video.

A player of Animal Crossing: New Horizons has drawn comparisons between the game’s owls and the cult classic show, Twin Peaks, in a hilarious meme video showing neither is what they seem. Fans of the hit 2020 game have recently found new ways to explore and take footage of their island thanks to the November 2.0 Animal Crossing update which added new features like cooking, as well as new functions for the in-game camera.

Prior to the ACNH update, the game camera – accessed through users’ NookPhones – offered limited functionality. While players could snap pictures of their island, player character, and villagers, even adding filters and frames, there wasn’t much else on offer in terms of play. That changed following the November update, which introduced the Pro Camera upgrade. The upgrade, which can be bought for Nook Miles, allows for first-person photos with hilarious angles, unflattering villager shots, and even hidden discoveries now all available. First-person mode has changed the way in which content creators bring Animal Crossing meme videos and recreations to life.

Twin Peaks fan and Animal Crossing player DamnNearKilledIt recently impressed the ACNH subreddit with their meme video exploring the game’s owls and comparing them to the mysterious TV show, proving owls aren’t what they seem. Using the Pro Camera, the player hones in on the messenger owls atop Harv’s home, but the result is somewhat surprising. As the player pans around, the owls are seen appearing and disappearing, with the user captioning the post “The owls are not what they seem…” The meme video parodies the line synonymous with Twin Peaks, in which of course, nothing – not even the owls – are what they seem.

This isn’t the first time Animal Crossing players have parodied movies and TV shows using the beloved Nintendo game, with some users even going so far as to recreate whole film trailers, or TV intros. As well as videos, lots of fans have brought their favorite other media into Animal Crossing with island designs, custom clothing, and more. Thanks to the flexibility of the game design, almost anything can be recreated on a player’s island and beyond, which is part of the reason why ACNH remains a timeless classic for many.

DamnNearKilledIt’s Animal Crossing and Twin Peaks video is made even more mysterious thanks to its night-time setting, the atmospheric smoke coming from the Brick Oven item, and the looming face of ACNH NPC and shopping plaza owner Harv himself, who other Redditors likened to Twin Peaks’ Leland Palmer. Despite being an older show its fans remain intrigued by its plot and themes, and it seems David Lynch’s suspicions of owls were perhaps correct – even in Animal Crossing: New Horizons.

Next: Zelda, Max Payne, & More: Why Twin Peaks Inspires So Many Video Games