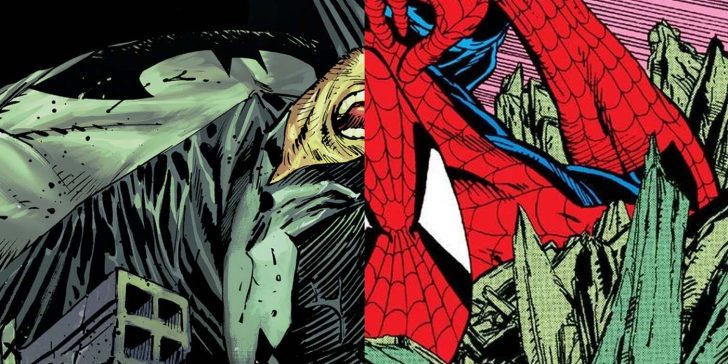 In new DC Comics cover art for an upcoming issue of Batman, the hero stars in a cover that homages a classic Spider-Man image.

A new villain is coming to the Batman universe and in recent cover art debuted by writer Chip Zdarsky, the Dark Knight takes on his new adversary in an homage to a classic Spider-Man from Marvel Comics. In a new look at an upcoming Guillem March variant cover for Batman #126 by DC Comics, Batman takes the place of Spider-Man in an homage to Amazing Spider-Man #316, where the new villain Failsafe takes the place of Venom.

When Venom made his full debut in Amazing Spider-Man #300 by David Michelinie and Todd McFarlane, the villain would immediately become a fan-favorite character whose profile would increase quickly in the pages of Marvel Comics. Venom would become a primary antagonist for Spider-Man as his terrifying symbiote appearance made him the perfect villain for the web-slinger. Later, Venom would transition to an antihero, then a full-blown hero in his most recently completed run in the comics. McFarlane’s covers starring featuring Spider-Man are some of the best and most homaged in the industry, with DC Comics even doing their own Batman-starring homage of Spider-Man #1 fairly recently.

In his Substack newsletter, Chip Zdarsky, who will be taking over Batman as its new writer alongside Jorge Jimenez and Tomeu Morey, shared a fresh look at an upcoming variant for Batman #126 from DC Comics. The cover, by artist Guillem March, features the new villain Failsafe and is an homage to Marvel Comics’ Amazing Spider-Man #316 by Todd McFarlane. Failsafe’s identity is still kept under wraps, but like the Marvel cover it homages, the villain stands above a battered hero while holding onto him. Additionally, the cover switches out the text “the non-mutant super-hero” with “the non-super super hero” while also changing the tagline “Venom is back” for “Failsafe is here.”

The actual open order variant cover from March will feature a new look at the “Doomsday-level villain.” Still, if you’re curious about Failsafe’s true appearance on the Spider-Man homage cover from DC Comics, Zdarsky said eagle-eyed readers “will figure it out…”, drawing a hilarious picture of Shrek. Unfortunately, Shrek isn’t actually Failsafe, for those wondering.

Of course, the original Todd McFarlane Marvel Comics cover is one of his best works and has been homaged many times, but it’s still somewhat surprising to see DC Comics tackle their own version of it with Batman. It shows the rival publisher’s mutual respect for each other’s most iconic covers. Readers can pick up the Spider-Man homage cover from Guillem March when Batman #126 from DC Comics arrives in comic book stores and online retailers later this year.

Next: Hulk’s Deadliest Power Isn’t His Strength, It’s His Weight