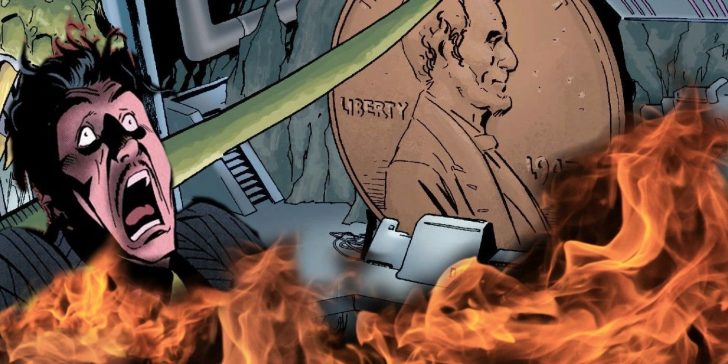 Two-Face and Penny Plunderer can finally share the Giant Penny’s origin story, but only one of them got to live to see the next Batman comic.

The giant penny frequently seen in the Batcave has endured long after the Batman villain to whom it originally belonged was banished to Hell. The Penny Plunderer is doomed to be forever overshadowed by his comically oversized coin, taken by Batman as a trophy for seemingly no other reason than… it looks great in the Batcave. And that’s the true shame of the Penny Plunderer: even his signature prop is more associated with Batman than himself. But the most cruel irony of all is that the very reason the Plunderer met his final fate is that very penny.

Joe Coyne (yes, that is the Penny Plunderer’s real name) debuted in 1947’s World’s Finest Comics #30 by Batman creators Bill Finger and Bob Kane. A small -time crook who commits penny-based crimes, Coyne fills a fake roll of pennies with tear gas to rob a bank, sucker punches Batman with a real roll of pennies, and steals antique coins and piggy banks. His hideout is, of course, a penny arcade. The villain’s premise wore itself out in one issue and he was ultimately sentenced to death at the end of it. However, the set piece in the middle of the story where Batman and Robin fight the Plunderer and his goons in a museum exhibit featuring the giant penny captured the imagination. The penny stayed on display in the Batcave from then on, eventually being retconned post-Crisis to be associated with the Joker, then later, Two-Face.

Joe Coyne would eventually be reimagined in 1999’s The Batman Chronicles #19 by Steve Englehart and Javier Pulido. Here he’s introduced pleading his case to some unseen authority figure, recounting the story of his troubled childhood and how his tragic upbringing inevitably led him to commit his one cent themed capers. This time around, during the fight in the museum with the  iconic penny, Joe’s coin winds up crushing him like a bug in all the chaos. Once he’s finished with his tale, he asks what precinct he’s in, only to be met with demonic laughter. Coyne isn’t waiting to be charged, he’d already been sentenced…to eternal damnation. Meanwhile, Batman is going to have to power wash the viscera off of that giant penny if he still wants it as a conversation piece.

The Penny Plunderer was revised once again almost a decade later in Two-Face: Year One #2 by Mark Sable, Jesus Saiz and Jimmy Palmiotti. This story from 2008 attempted to combine some of the giant penny’s conflicting backstories. In this comic the giant penny is in a bank and Two-Face muscles in on Penny Plunderer’s bank heist. When Batman arrives to apprehend them both, Two-Face shoots down the penny as a distraction, once again crushing Joe Coyne to death in the process. Two-Face and Penny Plunderer now share the origin of Batman’s iconic Batcave decoration, but only one gets to live to see the next Batman comic.

There’s something beautifully simple about a common, minuscule, low value item like a penny being blown up so big that everyone is forced to take notice. The idea of a man whose criminal ambitions all revolve around the smallest amount of money possible is both contrived and hilarious. But it wasn’t enough for the giant penny to merely outshine the Penny Plunderer, it had to snuff him out for good. Batman’s most famous Batcave trophy has long outlasted its creator, who has been banished to both eternal hellfire and obscurity.