Back in the day, Hell in a Cell was reserved for the absolute bitterest of feuds. It also used to rely on the gimmick match it was named for. Unfortunately, both of those truisms have fallen by the wayside.

The premium live event now features a mishmash of matches, very few of which take place inside a cell, covering some hardcore rivalries and some people who just started interacting the previous week. This year did deliver an actually great Hell in a Cell match between Seth Rollins and Cody Rhodes, but the best match of the night took place within a regular old ring.

The Raw Women’s Championship match kicked off the night; a tall task for the rest of the card, because the three women involved set the bar very high. I was hesitant going into this; the story didn’t need Becky, although her presence didn’t hurt things. She defeated Asuka in a match two weeks ago to qualify for this triple threat, after convincing Adam Pearce that mist-based victories shouldn’t count in the WWE history books.

While Lynch has delivered excellent matches with both the EST and the Empress, I can’t say I was excited to see her spin her wheels in this one. Keeping Big Time Becks in the title scene speaks to a larger issue that WWE consistently struggles with: how to keep stars relevant when they’re not champions.

The Problem with the Women’s Division

It’s been years since we could confidently count on a WWE mid-card that delivers, especially when it comes to the women; you’re either top guy, or you’re in catering. And talent like Lynch (or, say, Charlotte Flair), who helped mold the current women’s division, are too often rotated in the title scene, instead of allowing them to just exist and relying on their star power alone.

Becky’s addition to the match wasn’t going to impede anything — despite my own grumblings about the Big Time Becks bit, she hasn’t had a truly poor match in a very long time — it did feel a little bloated and unnecessary.

Shockingly, even the most broken clock is right at least once a year, and I ate my words after this one. This match ran about 15 minutes and delivered in every way it needed to; the triple threat set up allowed everyone to look confident, but not overpowering. Whenever one woman started to get the upper hand, somebody was able to step in and cut her down.

Much of the match focused on Becky going one on one with her opponents, which may be a good call to save Bianca vs Asuka for another rematch down the line. Still, Asuka was the standout here; the crowd wanted Bianca to win, but they were very much behind the Empress as well. She stepped in to break up several pinning attempts (some so close to a 3 count that she deserves the MVP for the timing alone,) scored some near falls, and in one very cool moment, even executed a double ankle lock on both women. 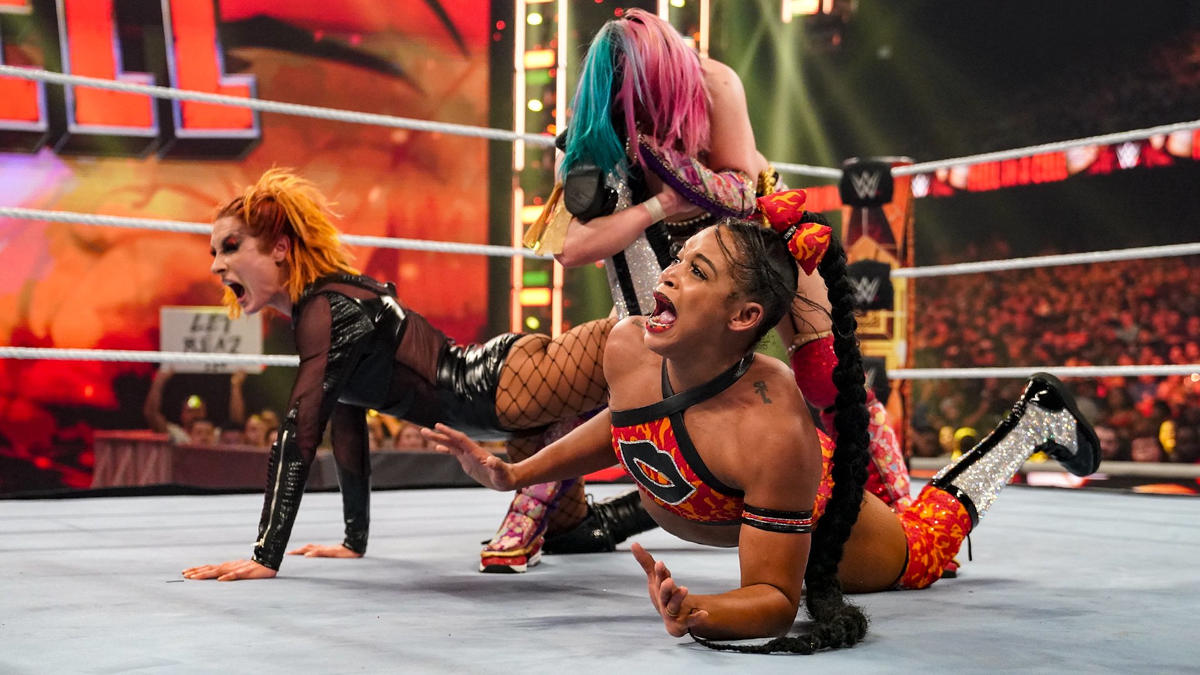 The biggest surprise to me was that in the final moments, we saw Asuka’s shoulders pinned to the mat, and not Lynch’s. Including Becky in the match seemed like an easy way to protect the other challenger, and to guarantee her a future solo title opportunity.

Lynch could afford to take the fall here, and yet, Asuka ended up with the short end of the stick again. What does this mean for all three women going forward? Unfortunately for the Empress of Tomorrow, it doesn’t seem to spell anything close to what she deserves.

Becky came out on Monday night to fulfill every fantasy booker’s wishes and join the 24/7 division. Dana Brooke interrupted a Big Time promo by winning the 24/7 title from Akira Tozawa (who is better than this, and we all know it) which lead to Lynch vs Brooke for 2019’s favorite belt.

There was an admittedly cool moment with Lynch threatening the entire 24/7 roster, scaring them off to leave her and Dana alone, and it was nice to see Becky shake it up with someone we haven’t seen her face in a long time. Asuka interrupted the very short match to assist Brooke with scoring the win, entangling her and Lynch further. Dana Brooke (who, honestly, I’ve actually really enjoyed in in her 24/7 role) managed to counter the Manhandle Slam, which ranks her above many of Lynch’s other opponents, so that was a nice point.

Keeping Asuka and Lynch feuding felt like a slight surprise; the expected move would be to give Asuka and Belair a one on one match and let Becky take some time to cool off on her own. The triple threat is fine enough to do once — but do we need to see it another three times? My answer is no.

Lynch is relevant enough that we don’t even need to see her in a consistent feud. Instead, she can kind of dick around and up her obnoxiousness for a bit, while Asuka gets the focus as a real title challenger. Belair vs. Asuka is an enticing  match, and it’s well capable of standing on its own feet, but Raw just can’t let the door hit Becky on the way out. Instead of giving Asuka a moment to shine solo, her story is again going to be overtaken by Belair vs Lynch.

Asuka has been on the main roster for nearly five years; half a decade, with no sign of WWE understanding her any better than they did in 2018. She’s been their champion a handful of times, but that never seemed to improve the way the company handled her.

As one of their best wrestlers across the board, she doesn’t need to be thrown into overcrowded matches. And yet, she frequently is. Her time in the tag division was unimaginative — while she and Kairi Sane worked well together, it was obvious the company just shoved them both together due to a lack of material for each woman individually. History repeated itself when she and Naomi briefly competed for the tag titles, a duo that did so little, I had to look up old episodes of Raw to confirm that they actually teamed.

I can’t name a single bad Asuka match; even her feud with Nia Jax managed to work. Her charisma and personality come through in every thing she does, which is even more impressive when you consider she’s given next to nothing. And still, Raw struggles to let her play to her strengths.

Dragging out the feud with all three women only cheapens Lynch and Asuka as genuine threats to Belair, and that’s in a division already lacking future challengers. Instead of keeping Becky revolving around a title that she doesn’t need (and that doesn’t need her,) Asuka and Belair deserve the spotlight. Bianca should hold onto that belt for a long time, but there’s no reason she can’t prop up some other underappreciated gems in the meantime.