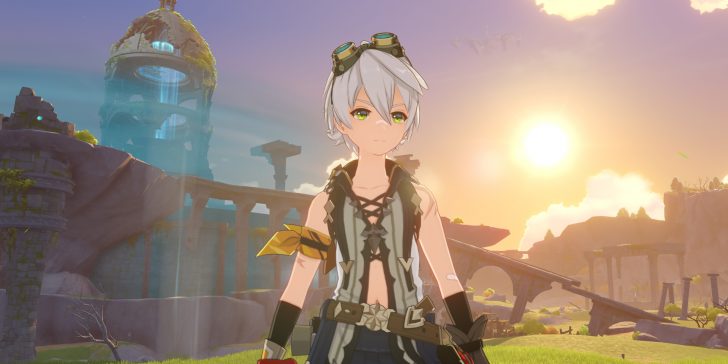 As a general rule of thumb, a 5-Star Genshin Impact character is better than a 4-Starcharacter. But that doesn’t mean you can’t have an amazing team with just 4-Stars. In fact, many Genshin Impact whales (you know, those mythical creatures with a seemingly endless supply of Primogems) still use their Diona or Xingqiu.

If you’re wondering who the best 4-Star characters are, here’s an updated Genshin Impact tier list for Version 2.5 (February 2022). What do the tiers actually mean? A D-Tier is a character that is only useful when you’ve got nothing else and SS-Tier means it performs as good, if not better than, some 5-Star characters. Let’s see how Amber scores! The best of the best. Fit for any team.

Bennett, who we affectionately call Benny, might just be the most popular character in Genshin Impact, and it’s all thanks to his amazing Elemental Burst. The Burst, with a 12 second duration and a cooldown of only 15 seconds, heals the active character and grants an Attack bonus within its AOE. If your Bennett has a high enough Energy Recharge rate (conveniently, also his Ascension stat), you can almost permanently heal and boost your team. Way to go Benny!

Like Bennett, Xingqiu is a Sub DPS and Support in one. His Rain Swords provide a bit of healing and reduce incoming damage for active characters. They also protect against interruption. Most importantly though, the Rain Swords deal a good amount of Hydro damage and are great for Elemental Reactions.

Shield provider or healer? Get yourself a Support who can do both! Diona’s Elemental Skill provides a shield on your active character, while her Burst’s AOE Cryo field heals all active allies inside. Both abilities scale with Diona’s max HP. On top of that, this bartending cat-girl is able to increase your movement speed while decreasing the enemy’s Attack power. Pair her up with a Hydro and she’ll freeze every Hilichurl horde in range, no problem. These characters are solid options for the role they fill.

The General of the Watatsumi Resistance Army, Gorou, is amazing and completely unique. Unfortunately, due to his role as a Defense and Geo damage booster, he only works for Geo-centric teams. Gorou is very much worth building if you use characters like Albedo or Noelle a lot, but ignore him if you don’t. For the sake of all the Geo-loving Genshin Impact players out there, General Furry gets a high placement on our 4-Star tier list.

Since the arrival of 5-Star Raiden Shogun and Yae Miko, Fischl is no longer the essential Electro Sub DPS. However, in comparison to other 4-Star characters, she’s still one of the best Sub DPS characters in Genshin Impact. Reaching the Prinzessin der Verurteilung’s highest Constellation level makes her especially great, as it activates joint Electro attacks. If you rotate her Skill and Burst, these joint attacks are almost always active.

Often overlooked, Xiangling is an amazing Elemental Burst Sub DPS. Her Burst summons a Pyro blade which circles around your active character for ten seconds. This duration is further increased by another 40 percent at Constellation level 6. Thanks to its passive quality, low Energy cost and low cooldown, this ability is perfect against larger groups of enemies. Her Elemental Skill, on the other hand, lacks damage, but it leaves a handy Attack-boosting chili pepper behind.

Don’t be fooled by Sucrose’s low base Attack. She may not seem special at first, but she’s a Reaction-focused Catalyst wielder who is able to trigger Swirl whenever she feels like it. This means she matches with any Elemental type except Geo. The Mondstadt Alchemist also provides Elemental Mastery boosts for the whole team. Characters who are good until you get a better 5-Star character which fills their role.

This Electro DPS is a tricky one to place on our 4-Star tier list. Thanks to his Claymore and Attack-boosting Elemental Skill and Burst, Razor is purely a Main DPS character. If we were to compare him exclusively against 4-Stars, he’d be at the very top of this Genshin Impact tier list. However, as soon as you get a stronger 5-Star Main DPS, wolf boy gets benched.

Another case of “great if you don’t have a 5-Star Main DPS yet.” As an active Pyro Catalyst wielder, Yanfei is basically the 4-Star version of Klee. With the Scarlet Seal system, she’s got a very strong Charged Attack. Her Skill and Burst are mainly used to deal immediate Pyro damage and further strengthen this Charged ability.

Don’t be fooled by Yun Jin’s Elemental Skill; she’s not a shield Support. In fact, the Skill only shields Yun Jin herself for a short amount of time before dealing Geo damage. The famous opera singer’s Elemental Burst is the relevant part of her kit, boosting her allies’ Normal Attack damage based on Yun Jin’s max Defense. Pair that with a long duration and short cooldown, and you’ve got yourself a great Sub DPS/Support ability.

Don’t underestimate this Hydro deaconess. Barbara may not be much use as a DPS, but she’s a great healing Support. Both her Elemental Skill and Burst provide a high amount of HP to active characters and the full team, respectively. Everything scales with Barbara’s max HP, so just drop your HP Artifacts on her and you’ve got yourself a proper build. Oh, and Barbara’s a free starting character too, making her truly accessible to everyone.

Think of Thoma as the 4-Star Zhongli. Pyro damage isn’t really his thing, but this professional housekeeper uses his Skill and Burst to provide active characters with a strong shield. Both cooldowns are quite short, so with the right build and timing, you are able to keep the shield active at all times. Admittedly, Thoma doesn’t come close to the strength of his Geo colleague, but he’s a lot better than Xinyan and his scaling (max HP) makes him easy to build. More niche characters who, like their A-Tier counterparts, are marked to be replaced but aren’t as powerful.

This lazy ninja can use Elemental Absorption with her Elemental Skill, which is already a good upside for her.. However, rolling on the ground doesn’t seem like the most effective way to trigger Elemental Reactions. Furthermore, although the healing provided by the Burst is useful, the Anemo-blasting Daruma (fixed location) isn’t that impressive.

She’s not exactly a fan-favorite, but don’t sleep on Noelle. She’s got a decent healing ability, a very short Burst cooldown, and takes care of all those dusty old Defense Artifacts for you. Healing with Noelle requires active time though, while most prefer a passive healer instead. She’s quite good in the role of Main DPS if you keep triggering her Burst, but she’ll be replaced when you get a 5-Star alternative.

Nonconforming Sister Rosaria of the Church of Favonius is another early-game DPS. She is capable of dealing decent damage, but her Elemental Skill cannot be used against larger enemies. Therefore it’s best to focus on her Burst; a passive Cryo attack with an eight-second duration and the ability to grant a Critical Rate bonus to anyone but Rosaria herself.

There’s some debate about the Crux Fleet Captain’s Elemental Skill. It’s loved for its high damage potential, but slammed for its duration and difficulty. In short, Beidou needs to use her shield at exactly the right moment and then hold it to deal damage. If she’s successful, her Normal and Charged Attacks receive a boost. It seems like a lot of trouble and active time for a character who is only good, but not great. With the right team, you can absolutely build around these characters, but they really do need proper support to work.

Icy exorcist Chongyun summons a frost field that infuses the active character’s Sword, Claymore, or Polearm with Cryo. Sounds great? Well, it only lasts for two to three seconds. You gain a Normal Attack Speed boost too, but it’s only suitable for specific characters and it doesn’t grant more than an unimpressive eight percent increase. Compared to Bennett’s field effects, it’s easy to understand why ice boy is stuck on a much lower tier.

We usually like Catalyst characters for their Elemental Reactions, but let’s be honest; who really cares about Crystallize? Furthermore, Ningguang’s fixed shield location can be a bit of a pain against highly mobile enemies. If you have another Geo DPS on the team though, passing through Ningguang’s shield grants them a 12 percent Geo bonus.

You may think that the General of the Tenryou Commission is basically Electro Bennett, as both her Elemental Skill and Burst grant an Attack bonus to active characters. Unfortunately, triggering the buff is time-consuming (involving her Charged Attack), hard to place in the right location, and only lasts six seconds. Kujou Sara is amazing when teamed up with Raiden Shogun at Constellation Level 6, and pretty bad in any other scenario.

Kaeya isn’t a particularly strong DPS, but he’ll do the job if you’re new to Genshin Impact. The Knights of Favonius Cavalry Captain is blessed with very short cooldowns, allowing you to cast Cryo frequently. He doesn’t have great AOE abilities though, so freezing larger groups can be difficult. His HP regeneration passive is superfluous, but Kaeya is never short on Energy. You should avoid these characters if you’re worried about building the “best” team. Any character above will do a much better job.

If there was a prize for worst scaling in the game, rockstar Xinyan would win it. Her Ascension stat is Attack, her Burst deals both Pyro and Physical damage, and she has a passive shield ability that scales with her max Defense and the number of opponents hit (not to mention the 18 second cooldown). On top of that, the shield grants a Physical damage bonus that only Eula would be even somewhat happy about. Avoid at all cost, unless you’re early in the game and in need of a temporary Main DPS.

If you’re just starting out, Lisa will help you create your first Electro-infused Reactions. Unfortunately, she doesn’t deal high damage, her Skill has a long cooldown, and her full Charged Attack takes ages, leaving her vulnerable to interruption. You should replace her with a more manageable Electro as soon as you can.

The Knight of Favonius Outrider’s popularity hasn’t increased much since Genshin Impact came out. This is thanks to the same bunch of issues: Amber’s Charged Attack takes quite long, her Burst is way too short, her damage (especially the Burst) is underwhelming, and managing Baron Bunny is a pain.

Do you agree with this 4-Star Genshin Impact tier list? Perhaps you would swap Amber and Bennett? Let us hear your thoughts in the comments!