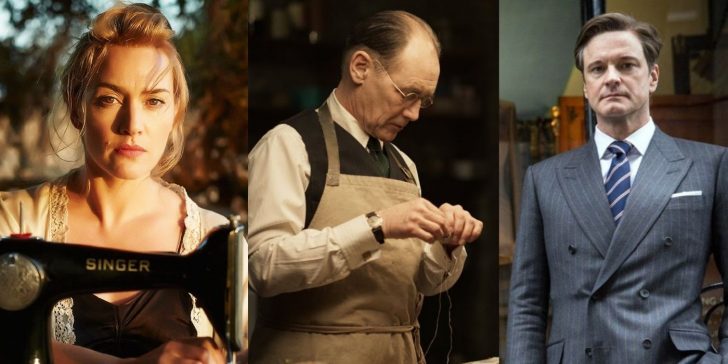 The recent period thriller The Outfit throws a Savile Row tailor in the midst of unlikely customers: a Chicago mob family. What starts off as a slow-burning drama turns into an unpredictable thriller as the tailor shop becomes a front for the mob’s business. The movie has been garnering praise for Mark Rylance’s lead performance, serving as a strong debut for director Graham Moore who is mostly known as the writer of The Imitation Game.

Audiences who found The Outfit to be tailor-made for their tastes must also check out similar thrillers that balance stylish production design with plot twists. And with the movie’s obsession around the art of tailoring, movies under the “tailor genre” also make for essential viewing.

When it comes to non-Marvel/DC comic book movies, Kingsman: The Secret Service is a cult favorite. The movie’s highlights include hyperviolent action sequences and a stylish take on the spy genre.

Apart from the titular agency preventing an international conspiracy, the movie spends a great deal of time stressing the importance of being a “gentleman” in order to be a Kingsman agent. This includes Colin Firth delivering a monologue on how “manners maketh a man” and a visit to Savile Row, the renowned British tailor shop. With The Outfit’s protagonist hailing from Savile Row, Kingsman’s ultra-stylish approach will work for the former’s admirers.

The biopic of mathematician Alan Turing allows Benedict Cumberbatch to shine in one of his best roles. The movie covers Turing’s early childhood and his integral role in the Second World War.

Fans of The Outfit must definitely check out The Imitation Game because this is the movie that kicked off Graham Moore’s cinematic career. Back in 2011, Graham Moore wrote an Alan Turing biopic that was included in Hollywood’s “Black List” of best unproduced screenplays. It is this screenplay that turned out to be The Imitation Game. Today, with Moore venturing out in directing with The Outfit, his body of work offers more potential.

The Dressmaker might be one of Kate Winslet’s most underappreciated movies but it is definitely worth trying out. The Australian production features Winslet as a dressmaker who returns to her sleepy town to take care of her sick mother. But there are other reasons for her return as she seeks to take revenge from the people who wrongfully blamed her for a past crime.

Both The Dressmaker and The Outfit interestingly deal with mild-mannered tailors who unexpectedly get involved in a life of crime. It is amusing to see how Winslet’s protagonist exacts revenge through her tailoring skills. As she wins over the townspeople with her dresses, she continues making her revenge plans.

This Cold War-era thriller movie directed by Steven Spielberg deals with an exchange deal between the US and USSR. While the Soviets agree to deliver captured pilot Gary Powers to the Americans, the other side promises to return detained KGB spy Rudolph Abel.

Most of the premise deals with American lawyer James Donovan’s efforts at sparing Abel from the death penalty. Instead of using caricaturish tropes, Bridge of Spies humanizes both sides. When it comes to the performances, Mark Rylance’s Oscar-winning performance kicked off a resurgence in his career. He continues to carry his calm and composed on-screen persona in recent works like The Outfit.

Analyze This plays around the concept that even criminals need therapy. As a hardened mafioso suffers from a great deal of stress, he goes to see a reluctant psychiatrist. The two engage in several hilarious encounters, turning out to be unlikely friends.

Billy Crystal’s Ben Sobel is not at all interested in dealing with a man from the mafia for obvious reasons. But fearing the reputation of Robert De Niro’s Paul Vitti, he has no other option but to help him out. Even though The Outfit lacks the comedic nature of Analyze This, its premise finds a tailor being dragged into a life of crime after Chicago mobsters become his customers. There might be plenty of crime movies about criminals but only a few talk about the people in their vicinity.

Out of Alfred Hitchock’s best movies, Rope might be his most minimalist one. Relying on just three actors and one room, the movie elevates its dialogue-driven screenplay with some classic twists. The plot involves two students killing off a peer just so that they can commit an intellectual exercise aka “the perfect murder.” But a journalist threatens to blow their cover as he seeks to outsmart the duo.

As a psychological thriller, the 1948 classic was definitely ahead of its times. The Outfit also includes a mysterious murder plot at its center. And constant shots of a body hidden in a trunk are easily reminiscent of a movie like Rope.

Based on John Le Carre’s spy novel of the same name, The Tailor of Panama finds a convict-turned-tailor accepting a new role as an MI6 informant. The plot thickens as he uses his espionage skills to investigate the Panamanian government.

When it comes to tailor protagonists in pop culture, the titular hero in The Tailor of Panama is a common pick. Geoffrey Rush’s Harold Pendel carries the suave charm of a tailor with secrets of his own, much like Mark Rylance’s Leonard in The Outfit.

Even though The Outfit is set in the year 1956 as opposed to The Untouchables’ 1930s setting, both movies depict the changing landscape of Chicago from a crime perspective. Whether it be Robert De Niro’s portrayal of Al Capone or Dylan O Brien’s Richie Boyle in The Outfit, some Chicago mobsters not only act the same but they even dress the same!

Men Of The Cloth is a documentary that focuses on the lives and work of three renowned Italian tailors. Footage of their everyday business not only reveals their mastery of the art but also how tailoring ends up giving them valuable life lessons.

If The Outfit remotely generated any interest in tailoring skills among any viewers, then they should definitely check out Men of the Cloth. Much like Mark Rylance’s movie, even the documentary takes a slow-burning pace to depict an art that takes a lot of patience.

Cut in the same cloth as other stylish action thrillers like the Kingsman franchise, Guy Ritchie’s crime-comedy The Gentlemen revolves around a marijuana kingpin and his struggles to keep his business afloat in the face of growing competition.

The Gentlemen is quite a contrast case when compared to a crime story such as The Outfit. While the latter takes a slow pace to explore its 1950s atmosphere and the crime life of the time, The Gentlemen relies on dramatic dialogues and Richie’s trademark action. Despite their drastic tonal changes, both movies know how to balance style with substance.

NEXT: 10 Movies For Fashion Lovers To Watch

Shaurya Thapa is an Indian freelance journalist who mostly dabbles in writings on cinema, music, and human interest features. When it comes to Screen Rant, he writes lists on a wide array of subjects ranging from international films to mainstream Netflix series and comic book trivia. He also hosts a podcast called ‘BhindiWire’, an Indian parody of IndieWire.