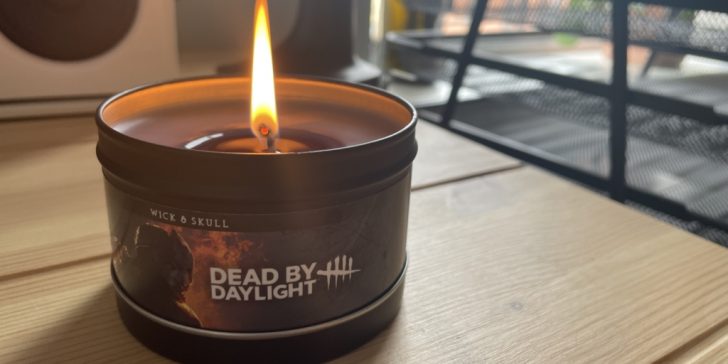 Video games are a multi-sensory experience — visual, auditory, and tactile. But despite the efforts of our greatest minds, so way has yet been devised to smell a video game. Maybe that’s for the best, but for those who want to get as close as possible, there are gaming-based scented candles like those produced by Wick & Skull. They sent me three of their offerings, and I’ve spent the last few days burning them in the background to see how they fare in the crowded market of home fragrance.

For the most part, Wick & Skull’s candles come in 8 oz tins with pull-off lids. The black tins are adorned with game cover art (in the case of the official collaborations they sent me) and game-inspired cartoons (for the candles referencing games like Minecraft and Dark Souls). There are also a lot of anime titty candles, for some reason. The Dead by Daylight Hex Totem comes in a 10 oz frosted glass jar with a more subtle label. The Wick & Skull logo adorns each lid, and is kind of charming in a neo-traditional tattoo shop kind of way. I’m not crazy about how they just slap on the official game art rather than a more considered graphic design, but the use of the ESRB rating box to indicate the burn time is pretty cute.

But hey, we’re covering candles here, so let’s talk wax. Wick & Skull’s candles are made of a “parasoy” blend, which means they’re part soy wax and part paraffin. Candles are made out of a lot of different kinds of wax, depending on their intended purpose, price point, and container. Paraffin is a popular choice for cheaper candles because it holds color and scent well. However, it’s a byproduct of the oil industry, which some people might not like. Soy wax is derived, as you might expect, from soybeans. It burns slower and cleaner than paraffin, so Wick & Skull’s mix of the two is not unusual. Other kinds of waxes often used in candles are coconut, which has a slow burn and carries scent well, and beeswax, which is firm and smokeless — these are both typically used in higher end candles from luxury brands.

Wick & Skull’s candles, then, are somewhere in the middle of the pack when it comes to quality. They’re definitely a step up from Yankee Candles, but they’re not quite on the level of brands like Le Labo. Of course, they’re quite a bit cheaper than those high-end candles, coming in at $19.99 for their normal 8 oz tins and $25.99 for the larger Hex Totem. In contrast, the omnipresent Le Labo Santal 26 will run you $80 for 8.6 oz. But pricing can be a little deceiving when it comes to candles — remember how I said that different kinds of wax burn for different lengths?

By comparing the unit price to the burn time, we can see how much we’re paying for a candle by the hour. I’m taking the manufacturers at their word on burn time, just to make things simpler:

But there’s more to take into consideration than just burn time. You want to know how these things smell, right? I received three candles from Wick & Skull, two based on Dead by Daylight and one based on Tiny Tina’s Wonderlands. I haven’t actually played either of those games, so I can’t tell you how well they capture the gameplay experience, but I can tell you what I thought of them. Of course, scent is a subjective experience, and your preferences may vary from mine.

The first Dead by Daylight candle is called “Trapper,” and Wick & Skull says that it smells like “darkness, despair, and horror.” Its notes include musk, incense, and smoke, though I mostly only got the latter from it. I’m not a big fan of smoke-heavy scents — when I come back from a bonfire I have to immediately take a shower and wash my clothes to get the smell off me. If you’re into that kind of thing then you might like this, but I think most people will find it too one-note.

The candle based on Tiny Tina’s Wonderlands, Wick & Skull’s newest collaboration, smells like “Chaotic Great.” In actual olfactory terms, that translates into a sugary plum scent, which frankly isn’t my thing at all. But I guess if you were playing Dungeons and Dragons with a hyperactive dungeon master who was trying to set the mood with some candles she got from Bath and Body Works, it might smell like this.

Lastly, the larger Dead by Daylight “Hex Totem” gives a balanced smokey, leather-tinged fragrance that’s right in my wheelhouse.  It’s more subtle and complex than Trapper, and is the kind of scented candle that I would buy myself. Plus, it doesn’t hurt that the frosted glass jar and monochromatic label look a little classier than the smaller tins.

Generally I found the Wick & Skull candles to be reasonably strongly fragranced without being overpowering. They’re made with a combination of natural and synthetic fragrance oils, which is common at their price point. Overall, they’re a good option for anyone looking to elevate their home fragrance situation a little, or anyone curious as to what their favorite game might smell like.  They’re great starter candles for the beginning enthusiast, and they’d make neat gifts, too. But uh, if you go for the anime titty ones, just be sure that’s the vibe you’re trying to curate.

Wick & Skull provided the products for this review.