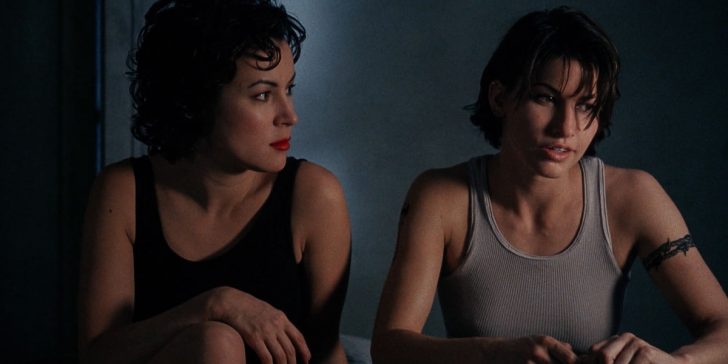 This month on You Love To See It (Fanbyte’s movie podcast, styled after a delightful neighborhood video store!) we’re pursuing our Spring Flings. That is, my co-host Fernanda and I (and our intrepid Producer, Paul Tamayo) are picking movies where we have a big old crush on a character, watching those movies, and analyzing the movie (and the crush!) with typical YLTSI rigor (and humor).

The full episode is embedded below (and you can download it here too!)

I also wanted to share the show notes that we work off of, as we prepare to record and dive into an episode. Fernanda and I take turns writing a short synopsis, then we both have a section of “must discuss” items, which may contain spoilers for the film at hand. Think of it as a cliff’s notes version of the topics we prepped to discuss, and a fun little insight into our brains as we analyze our film of the week!

For those who don’t know, Bound is a noir thriller about two women who begin a steamy love affair and then decide to steal 2 million dollars from mobsters. As one does. It stars Jennifer Tilly as Violet, Gina Gershon as Corky, and some dudes as some dudes. Also, it rules.

And here are our notes!

So, I’m sure we’ll cover this in the intro, but I had NO history with the movie and absolutely no idea it even existed. The minute I mentioned it to Rodrigo, however, he immediately remembered, got super excited, and talked about how in love he was with both Jennifer Tilly and Gina Gershon.  And then he complained about how they never showed Jennifer Tilly’s boobs. Of course he was misremembering (or saw a different, less explicit version), and he wasn’t in the room as I watched the movie, so I texted him “BOOBS” when they finally appeared in their full glory. And then as he came I rewound the scene so he could see the boobs. And then he said “thank you for the boobs.” And left again.
I am actually curious to hear your thoughts on the whole courtship process and how they portrayed their romance. At first it looked to me like it was very geared to the male gaze, and Jennifer Tilly’s early seduction efforts kind of looked like — at least to my mostly hetero eyes — a hetero woman trying to seduce a lesbian woman the same way she would seduce a straight man. But then I thought about how much of that was probably my own projection and my own gaze, especially after considering how their relationship evolved throughout the movie and how cleverly they played with the noir genre stereotypes. Add to it the  Wachowski sisters’ own gender identity and my mental framing of it completely switched. Again, though, I come to all of this from a hetero perspective, so I’m much more interested in your thoughts on the matter than mine.
Then I found out the sisters actually hired a sex educator to run the sex scenes, which I’m gonna go ahead and guess was not *the norm* in 1996?
I am also curious to hear who your crush is! Corky, Violet, or both?
I am simply *obsessed* with Corky’s lesbian tattoos.
I love the movie’s odd-ass pacing. It starts off as this weird erotic thriller and then it takes a total turn, it’s almost like a few separate movies but it all works so well together. It just continues to build upon itself. I was so thrown off all the time, but in a good way.
This whole endeavor truly is just a lesson in creativity. The whole movie is like five different rooms and a handful of actors and it still manages to be incredibly dynamic and tense — thanks in no small part, of course, to the stellar camera work and all the over-the-top style choices. I am usually turned off by gimmicky moviemaking, but here they really make everything come alive.
I cannot tell you how much I love the ending. I was fully expecting some tragic twist or some horrible betrayal — because god forbid a Hollywood movie would allow two women to be legitimately in love and actually end up together (something I suspect the Wachowski sisters knew we would be thinking)  — and then it never came! We got a happy ending! I mean, apart from all the dudes dying and stuff. It’s truly delicious.
I also really love the character of Violet. We’re so used to seeing these super sexy, beautiful women as either stupid, insipid or just inevitably conniving, and she is none of these things. Even beyond the queer storyline, it’s so interesting to think about how so many of us women have to wear our own disguises in order to navigate a world governed by the male ego, and Violet’s character really embodies that in a very interesting way. I kept expecting her to betray Corky, to really live up the femme fatale imagine, but she never did. Sure, her actions may have led to several deaths, but the men who died all sucked, sooo… Also, when you think about it, it was Caesar’s own reaction to the money missing that led to all the killing.

This is a formative, foundational, FANTASTIC queer movie. Once upon a time, I was a queer movie reviewer at a queer lady media website, and I had a video blog reviewing older queer movies. This is by far the best from the time (there are a couple of others that are decent, but sadly, most lesbian films of the 90s are just… not terribly well made. There are REASONS that mostly have to do with access to resources, so the fact that this is a Hollywood movie with any budget at all gives it an edge.)
Again, I have a long and storied history with this film, but I was worried it wouldn’t hold up super well. To my delight, it absolutely does. It’s an exciting, fun, slightly over-the-top thriller that may actually be the Wachowski sisters’ best movie overall (I honestly love a lot of their work because I love camp, and I love The Matrix, but this is so shockingly good as probably their most restrained work, despite also being over-the top). I truly, truly love that they hired a lesbian sex consultant (“technical consultant Susie Bright” in the credits), and that, not much later in life, both directors would identify as queer women. They knew something, and I genuinely love that.
All men are terrible in the movie (Mickey is the least-terrible man?) and our queer heroines are wonderful. It’s a good movie with great love scenes between women, and the women WIN. They don’t die. They don’t both end up romantically entangled with men. For 1996, I can’t even begin to overstate how revolutionary, refreshing, and wonderful this was.
On a pure filmmaking level, this movie is SO FUN. The costume and production design bely a lot of campy influence, the colors and tones are so noir and light-camp, the fluorescent blood is so much. Even the music is two notches above “slightly obvious” — I really feel like these elements add to a sense of weird playfulness and humor here, and it fits so nicely.