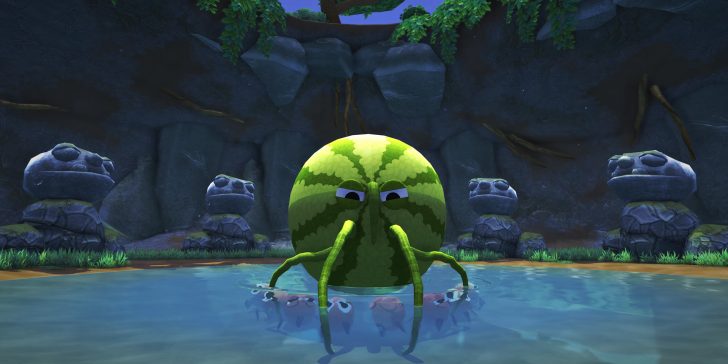 The first thing you need to know about the Bugsnax DLC demo for the descriptively-titled Isle of Bugsnax is that it was held in the back of a dentist’s office. If this were intentional, it would have actually been a really good joke within the context of snack-based bugs, but it turns out that it was just happy coincidence.

The second thing you need to know is that, upon entering, one of the first things you see is a whiteboard that has “Bugsnax…but big???” written on it in teal-colored marker. That white board message could function as this preview on its own, so while I encourage you to read on, rest assured that you have actually already read the most functional part of the article.

The new Bugsnax DLC starts with the villagers from Bugsnax seeing an island emerge from the sea before the game’s end sequence. A group of grumpuses, including obviously the player, go to check it out and end up involving themselves in a new mystery with various quests and character interactions. That latter bit is actually the main impetus for Young Horses to work on this DLC, as the biggest feedback they received from the original release of Bugsnax in 2020 was that players wanted to spend more time with the game’s characters.

But much like other famous isles in cinema history, this new region is full of monsters of large size. Young Horses has hit on something that Pokemon had already figured out a few years ago: people like small things becoming big. The very first Bugsnak you encounter is a Bunger bigger than three grumpuses, appropriately named a Bunger Royale. Regular traps can’t capture giant bugsnax, so players are exhorted into finding a mysterious ancient pot attached to a similarly ancient statue and throw it at large Bugsnax to make it small and available to trip up to capture.

It was at this point, as I bumbled around the beach trying to remember how anything in Bugsnax worked, I had to apologize several times to the developers, saying “I’m sorry, the only game I know how to play anymore is Elden Ring.”

Isle of Bugsnax is roughly what you think it is from there, being more Bugsnax. You take on quests from villagers who want you to help them get into an area, or capture a specific Bugsnak or what have you and you learn more about them. This includes grumpuses like Triffany, Shelda, and Chandlo, who is real, strong, and my friend. He also really wants to see if he can get big like the Bugsnax do and I believe in him like any friend would.

Players can also return to Snaktooth Island, the setting of the main game, whenever they like. While there, they can participate in new features like letter-writing with the villagers and decorating your own home. Letter-writing assigns you character quests which can net you various items to place around your house, such as a giant cowboy hat you can put at the top. I asked specifically how Animal Crossing these new features were and the developers answered “Animal Crossing as all hell,” which seems to bear out in the execution.

I also asked if anything in the DLC will change Bugsnax’s ending, to which the developers stated that it would change one small thing. They also were about to say something else, but stopped before saying so and simply answering “We have to have some secrets.”