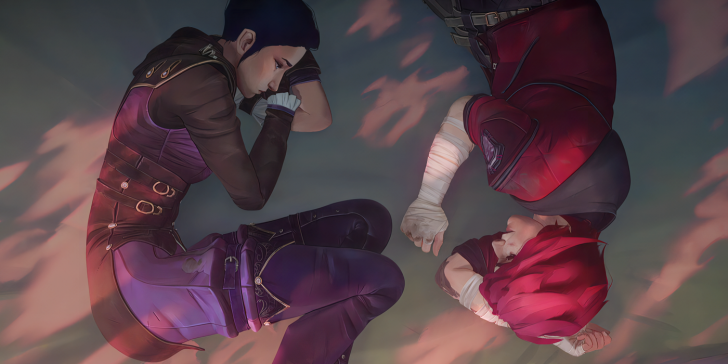 You don’t have to spend long in online fandom spaces to notice that fanfiction is dominated by shipping, and shipping is dominated by male-male pairings. Every year, Archive of Our Own posts annual and cumulative stats demonstrating as much. In August 2021, 60 percent of the top 100 ship tags for the previous year were male-male, while 69 percent of the top 100 ship tags of all time also featured two men. Only three of 2021’s top ships were between two women.

2022 will see at least one other female-female pairing added to that list: Arcane’s Caitlyn and Vi, whose fanfiction tag exploded since the show finished airing on Netflix last November. At more than 3,000 fics, their tag is nearly double the size of the League of Legends show’s next most popular pairing, Jayce and Viktor. Given that this is so rare, CaitVi — or “Piltover’s Finest,” as their dedicated shippers affectionally call them — are a crucial example of how fans will latch on to well-written women, and the well-written queer romances involving them.

Based on interactions and other hints within League of Legends, many fanfiction writers have shipped the two since at least 2014, according to the earliest upload dates on Archive of Our Own. In the League of Legends lore, the pair took down a violent gang in Piltover. But no one knew how they came to work together, particularly given their contrasting backgrounds and personalities. When on the same team in the game, they receive a small hidden buff; when on opposing teams, they have specific taunts, including Vi imitating Caitlyn’s British accent and calling her “cupcake.” If Caitlyn is killed, she’ll say, “Tell Vi that I–” before being cut off.

“It’s clear from the little snippets of their lore we have in the game that they have an intimate and mutual level of trust in their partnership, something that runs deep and has been built up over time,” Kye, a CaitVi fanfiction writer and long-time League of Legends fan, says. “The dynamic between Vi’s hotheadedness and Caitlyn’s more straight-laced approach to the law always fascinated me as a real sucker for ‘opposites attract’ relationships.”

But the ship’s popularity, especially in queer fandom circles, snowballed when Arcane was released. “[Longtime shippers] were so used to crumbs of possibility that when the relationship began developing on-screen, they were the most vocal, the most excited,” writer Gillywulf says. “That energy of just having something [real] spiraled and took hold of people new to the ship, and still feels prevalent.”

While shows like The Legend of Korra, She-Ra and the Princesses of Power, and Steven Universe have paved the way in representing sapphic relationships (with their own booming fanfiction spaces to prove it), it’s still rare to see sapphic relationships on-screen. When meaningful relationships do appear, it sparks excitement in fandoms, even when they’re only in the early stages like Caitlyn and Vi in season one of Arcane. Though many were already excited for Arcane before its release, either as League of Legends fans or because of other factors like the previous work of animation studio Fortiche, others — including Gillywulf and myself — only became interested after hearing about CaitVi.

One scene that went viral among CaitVi fans occurs in the final episode, where Jinx — Vi’s antagonistic sister — taunts her about Caitlyn. “I paid your girlfriend a visit this morning,” she says. Though Caitlyn isn’t officially Vi’s girlfriend, her insinuation conveys this scene’s significance from a queer point of view. Moreover, Vi’s fear, and the care for Caitlyn that underlies it, is obvious. She knows Jinx is talking about Caitlyn without needing to be prompted, and she doesn’t argue against the wording.

When Vi asks what she’s done, Jinx replies by saying she made Caitlyn a snack before she reveals a cupcake. The action serves as a callback to the flirtatious nickname Vi begins using for Caitlyn in the fifth episode. The scene captures CaitVi’s portrayal throughout the first season: Though the two aren’t currently officially together, their relationship is an undeniably important part of the plot and, even in its earliest stages, too explicit to be subtext.

“I actually didn’t know about Arcane until the famous cupcake scene began making its rounds on social media,” Gillywulf says. “I remember being instantly intrigued because there wasn’t really any other interpretation of the scene besides a queer reading.” Though they were hesitant at first, only knowing about League of Legends as a game with a reputation for its toxicity, the glowing reviews circulating by the end of the first season “were too much to ignore.”

Once they started watching, they were immediately invested in CaitVi. “I loved their exchanges and how their relationship morphed from outright strangers to a strong bond of trust,” they continue. “They perfectly balance each other’s fighting styles, way of thinking, and resources. Even with episode eight’s ‘break-up,’ it was very clear they still wanted to hold on to one another. Who has such an emotional conversation after only a few days with someone? They just made each other so soft.”

“There was something incredibly human about Caitlyn and Vi’s relationship in Arcane,” writer AlexisCyra says. “The way their bond develops so authentically through a deeply traumatic series of events made the brief moments of Vi’s vulnerability or Caitlyn’s yearning feel exciting and earned. Those feelings being shown as they were meant a lot to me.”

Even when they do appear on-screen, women-loving-women in media are often “buried in subtext or so explicit that you lose some depth in the process,” as AlexisCyra points out. And she understands why: when bad actors try to deny queer love in media, it makes sense to portray it unarguably.

For example, when The Legend of Korra ended with a shot of Korra and Asami holding hands, bad actors rushed to call it platonic gal pal behavior. This consistent reaction after creators — especially marginalized ones — overcome various corporate hurdles to feature sapphic romances in their stories has led to an understandable defensiveness. In order to shut down this kind of debate, people want to see sapphic relationships cemented immediately.

While Arcane has been criticized by some for not speeding up Caitlyn and Vi’s relationship in season one, fans like AlexisCyra feel the pairing, “comes from a future where not every relationship has to be developed in an almost defensive way against those types of comments. It’s super natural. The scene on the bed in Act 3 is profound even now with how much it manages to convey about the two women without a single ‘I love you’ needed.”

For a long time in fandom, many people have questioned why more fanfiction doesn’t star women. It’s been suggested that misogyny, particularly internalized misogyny given that most fanfiction authors are women themselves, has generally prevented writers and fandoms from getting invested in female characters. But others have pointed out that it’s simply incredibly difficult to write content about female-female ships for most media, where getting even one well-written female character is rare.

“While I’ve always been a huge fan of F/F ships, I tended to focus more on writing M/F when I was young since that’s pretty much all we were shown growing up,” Kye says. “As I grew older and into a queer identity, I’d say 80 percent of what I wrote shifted to M/M because I wanted to tell queer stories. But the majority of characters in whatever media I consumed were male, or the main focus was on the male characters interacting and being fleshed out as individuals.”

But now, shows like Arcane are demonstrating that fans respond when media actually provides well-written women, especially well-written queer women. “CaitVi are just so integral to the emotional core of [the show],” AlexisCyra says. “Arcane wants you to celebrate these two women and their journey together, and that kind of promotion fuels a lot of creatives.”

Caitlyn and Vi even get more attention than other romantic relationships in the show. Though the show’s heterosexual couple, consisting of Jayce and Mel, gets together quickly and is even shown having sex, it feels hollow in comparison because most of their development happens off-screen. CaitVi’s comparatively slow burn entices both casual viewers and creatives who have the desire to explore their potential.

The excitement of having a practically canon sapphic couple, and the promise of more CaitVi in season two, has created a fandom that’s hungry for more — and ready to support the fan creators who provide it. Fans gather in Discord servers like The City of Progress to discuss and collaborate on fan works; share fanart across social media using hashtags like #CaitVi, #Violyn, and #PiltoversFinest; and create montages of CaitVi scenes on YouTube and TikTok.

“The Arcane fandom has been the most encouraging community I have ever been a part of,” Gillywulf says. “Everyone is so excited to hear everyone’s ideas and read what they’ve published.”

Caitlyn and Vi have a perfect storm of factors that have allowed the ship to gain popularity. It has two well-developed women who interact well with one another and whose dynamic had already intrigued shippers. They have on-screen chemistry that feels neither too subtle nor too forced. And they have enough openings for people to imagine where the couple might go from the end of season one.

With the wait for season two being a long one, fanfiction writers are eager to keep creating content that reflects their hopes for what’s to come for Vi and Caitlyn. “It gives room to people who want to write more angsty post-canon stories or the people like me who enjoy giving the girls a happy ending,” AlexisCyra says. “That diversity to what’s being written in the tag is why it’s always so fun to read through.”