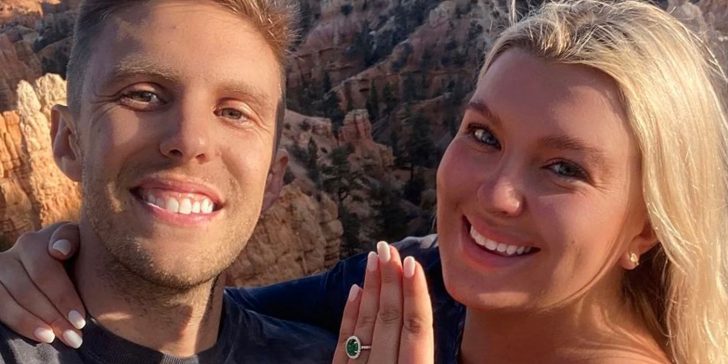 In a sneak peek of the return of Siesta Key, Chloe, who typically keeps her relationships private, gets her boyfriend ready to meet her friends.

Chloe Trautman is ready for her new boyfriend to meet her Siesta Key co-stars in a new sneak peek for the upcoming season. Fans of the show already met her now-husband, Chris Long, back in early November when the star revealed the two had gotten engaged at Bryce Canyon National Park in Utah. Chloe shared that instead of a traditional engagement ring, Chris gifted her an emerald ring that held a lot of significance for the star. The crystal represents the heart chakra and has many crucial meanings, such as compassion, patience and universal love, all of which seem necessary in any healthy, long-term relationship.

During the Siesta Key season 4 premiere, Chloe returned to the show as a new version of herself. She gained quite the reputation on the show for gossiping, spreading rumors about her friends and seemingly always finding herself at the center of the drama. When the drama was brewing on the show, all roads seemed to lead back to Chloe. However, last season, the star reinvented herself as the spiritually enlightened Chloe who seemed far removed from her past self. Unfortunately, her friends weren’t so quick to accept the new her and even believed she hadn’t changed at all but was putting on a front. With her new relationship with Chris, it seems like she hasn’t let her friends’ doubts knock her off her journey quite yet.

Though Chloe’s friends don’t necessarily understand her spiritual beliefs, she’s ready for them to meet her equally spiritual boyfriend. In a preview for the return of Siesta Key, Chloe prepares Chris to meet her friends. The two are lounging on a beach on vacation, discussing their upcoming return to Siesta Key. The preview reveals a flashback to a scene where Chloe tells friends Amanda Miller and Juliette Porter about Chris, claiming, “It’s really serious. I feel like I’ve met my soulmate.” The pair discuss their mutual feelings about each other and how they’ve helped each other grow spiritually. However, Chloe brings up one concern; they’ve spent so much time together that she’s been distant from her friends back home. “But now, when we go home to Siesta Key, you’re gonna meet a lot of my friends,” Chloe tells Chris. “I’ve never had a boyfriend that I’ve brought around, so just be prepared for people to pry a little bit.”

The Florida native also explained to her boyfriend that her friends haven’t exactly been supportive of her spiritual journey, and he seemed to have the perfect spiritual analogy in response. “There’s that picture of a caterpillar turning into a butterfly and the caterpillar’s saying, ‘You’ve changed,’ and the butterfly says, ‘We’re supposed to.'” In the previous season, Chloe’s friends had a difficult time coping with Chloe’s evolution. Despite all the issues she may have caused them in the past, they found themselves longing for the old Chloe. But as of now, the star doesn’t seem to have any plans of going back to her old ways.

While fans have gotten the inside scoop on many of the relationships on the show, Chloe has always kept hers private. It’ll certainly be interesting for fans to see one of Chloe’s relationships play out on screen, especially since she’s so used to being invested in her co-stars’ relationships instead. As the return of the show nears, fans are counting down the days until they get to see Chloe and Chris’ very quick journey from boyfriend and girlfriend to husband and wife. With her Siesta Key co-stars always share their unfiltered opinions, they’ll surely have something to say about the spiritual couple’s quick trip to the altar.

Next: Siesta Key: Cara Admits She Never Actually ‘Turned Over A New Leaf’