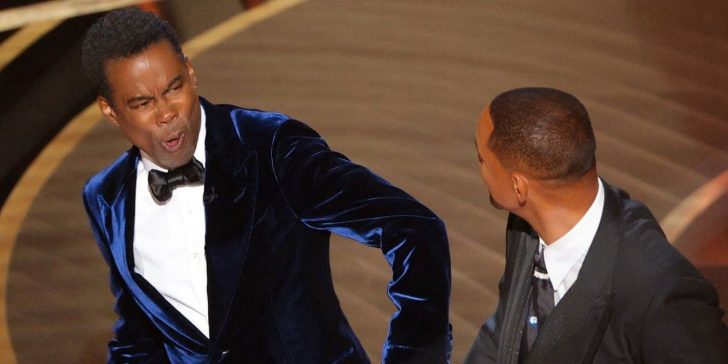 Will Smith slapped Chris Rock on live TV during Sunday’s Oscars, but Rock is choosing to not file a police report against the King Richard actor.

Chris Rock is declining to file a police report after Will Smith slapped him on live television during the 94th annual Academy Awards ceremony Sunday night. Before presenting the award for Best Documentary, Rock took a moment to poke fun at members of the audience. One of the targets of his jokes was Jada Pinkett Smith, who arrived at the awards show with a nearly clean-shaven head. Rock joked that she was preparing for a role in the sequel to G.I. Jane, a 1997 drama that famously saw Demi Moore shave her head as part of her character’s journey to become a Navy SEAL.

Pinkett Smith was visibly unamused by the jab and her husband wasted little time showing his displeasure as well. Within seconds, Smith was on the stage of Hollywood’s Dolby Theatre and delivering a smack to Rock’s face before turning around and returning to his seat among a shocked audience. While the American broadcast was censored, unedited clips of the incident emerged almost immediately from other regions around the world. In them, a stunned Rock can be seen saying, “Will Smith just smacked the s*it out of me.” When the camera cuts to a clearly agitated Smith, now back in his seat, he can be seen yelling at Rock to “keep [his] wife’s name out of your f*cking mouth.”

Related: What Happened With Will Smith & Chris Rock At The Oscars?

But despite the assault being broadcast live to millions of viewers across the globe, Rock is reportedly declining to file a police report against the King Richard actor. According to Variety, the LAPD says they are aware of the altercation, but that the victim elected to not file a police report. However, the statement does specify that a report could still be filed in the future. See the LAPD’s full comments on the incident below:

Not long after the disturbance, Smith would go on to win the Best Actor Oscar for King Richard, in which he plays Richard Williams, father of tennis legends Venus and Serena Williams. Smith’s tearful acceptance speech for his first Oscar trophy was given to a palpably tense auditorium. Amy Schumer, one of the show’s hosts, even joked that the mood in the room had noticeably shifted in light of the incident.

While it might be commonplace for hosts to poke fun at attendees during major awards shows, Pinkett Smith last year revealed she is suffering from alopecia, an autoimmune disease that results in hair loss. Whether Rock knew that or not, the fact might shed some light on why Smith reacted the way that he did. While that doesn’t excuse Smith’s actions, it at least offers some perspective. Regardless, with Rock declining to file a report, hopefully the Chris Rock v Will Smith fiasco will be little more than a footnote in Oscar history.

Next: Oscars 2022: Every Best Picture Nominee Ranked From Worst To Best

Kevin Phelan is a Comics Editor for Screen Rant and has been obsessed with comics, films, and TV his entire life. He just can’t believe people actually pay him for it now. His work has been featured in outlets including USA TODAY, The Huffington Post, and Cracked.com. Outside of work, he can be found continuing his quest to pet every dog in New York.