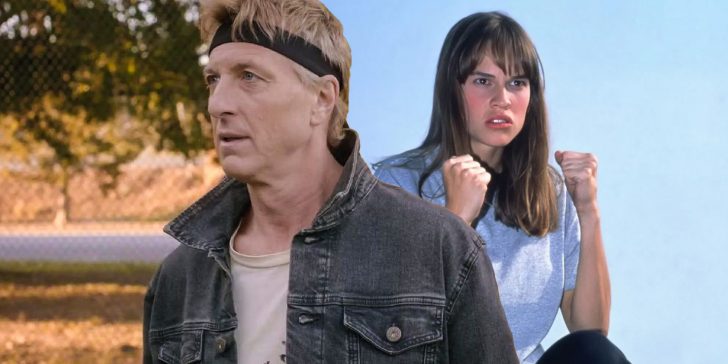 Cobra Kai co-creator Hayden Schlossberg says Hilary Swank’s Julie Pierce is “one of the toys in the toy chest” and “anything is possible.”

Cobra Kai ran its first two seasons on YouTube before making the move to Netflix for seasons 3 and 4, which only increased its viewership and acclaim. The series has become a hit thanks to its impressive choreography, humor, nostalgia, and likable characters—many of whom are portrayed by past Karate Kid actors reprising their old roles. This list includes original Cobra Kai sensei John Kreese (Martin Kove), Daniel’s mother Lucille (Randee Heller), Ali Mills (Elizabeth Shue), Kumiko (Tamlyn Tomita), and Chozen Toguchi (Yuji Okumoto). On top of that, season 4 saw the return of Thomas Ian Griffith’s The Karate Kid Part III character, Terry Silver. It seems like there are only a couple of past Karate Kid characters who have yet to make a return and Swank’s Pierce is one of them.

During a recent discussion at Deadline’s Contenders Television panel, Schlossberg teased Swank’s potential return as Julie Pierce. While remaining vague, Schlossberg called Swank’s character “one of the toys in the [Cobra Kai] toy chest.” Read the full quote below:

“Anything is possible,” Schlossberg said. “I always say if you’re a fan of The Next Karate Kid and you want to see Julie Pierce who Hilary Swank played, we’re the show to watch to see if that happens. Season 5 is going to be coming out. It’s in the can. Anything is possible. Julie Pierce is one of the toys in the toy chest so we’ll see.”

While Schlossberg’s comments were vague, fans can expect more Karate Kid franchise cameos in Cobra Kai season 5 either wy. At the end of season 4, Silver had Kreese arrested before telling him not to worry because he’d dig up an “old friend” to help him run Cobra Kai. Many took this as a reference to Mike Barnes (Sean Kanan) or Snake (Jonathan Avildsen) from Karate Kid III. The season finale also saw Daniel recruit Chozen, who has been elevated to a series regular in season 5. As Daniel, Chozen, and Johnny continue to combat Cobra Kai, they’ll likely need even more allies. Macchio has even talked about a Swank cameo working in Cobra Kai.

Thus far, every season of Cobra Kai has featured at least one new character from past Karate Kid films. That said, if the already-filmed season 5 opts to solely focus on the addition of Barnes rather than Pierce, Swank’s The Next Karate Kid character could surely appear in future seasons as someone familiar with Miyagi-Do Karate. While no official release date for season 5 has been announced, it is expected to be dropping at some point this year and promises to be as unpredictable and exciting as ever.

Everything We Know About Sonic’s Knuckles Spinoff Show