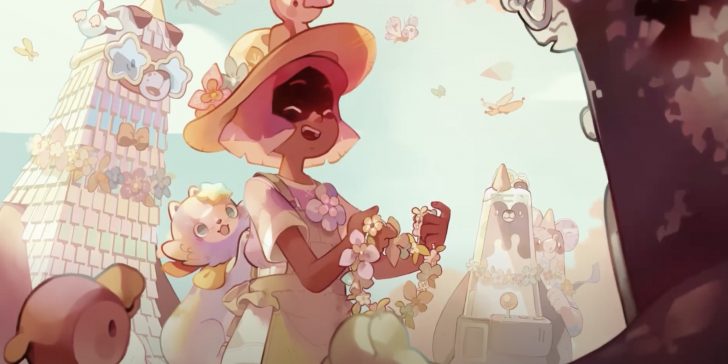 As a daily Cozy Grove player (a Cozy Grover, you might say), I’ve been pumped about today’s DLC, the first paid expansion pack for the game, called the New Neighbears DLC! It’s the first batch of new character content (and since finishing all the main game story content last… August, I think? I’m hungry for more!) In order to make room for the four new characters, four existing bears will say goodbye.

As such, there are spoilers for the main story content of Cozy Grove ahead. If you haven’t yet helped (or even unlocked) the seventeen main story bears, turn back now!

This one kind of broke my heart, since Ursula Pine (the garden bear, who offers gentle encouragement and motherly wisdom) is moving on. She even tells you she loves you, after noting that someone else needs her garden space.

Bye and Farewell to Bruin Tram

Bruin, the troubled soul who got a little too into conspiracy theories, is moving along. He’s pondering the future!

Clyde, the capitalist bear, is moving on to greater ventures in the sky. Or wherever ghost bear souls go when they are done here.

All the Best, Arjun Bhalla

Arjun is going to forget this existence (but on purpose, this time), and bring his photography skills into the afterlife. Or… after-afterlife.

It’s honestly a bit sad, especially if you are a daily player like yours truly. I’ve been hanging out with these little characters every day for over a year now (with a couple of days off, admittedly, but not many). I do their quests each day, and hug them every now and then. If you want to play the DLC, and want to say goodbye to your friends here, now is the time.

But dealing with trauma, loss, and sadness (albeit relatively gently) is a big part of the story in the game, and there may yet be a way to see your favorite buddy again someday. There’s a light teaser on Spry Fox discord, where a tester noted a potential feature in the future to “hang out” with them again (admittedly, this was phrased with a “sort of”).

Now, here’s what Spry Fox has released about the new characters:

Once you’ve helped the original 17 bears reach peace, you’ll meet partier Archie, perfectionist Ben, shy-as-a-mouse Lillian, and collector Beatrice. Prepare to be amused, delighted, and heartbroken as you help your new friends through fully fleshed out personal stories that take full advantage of the many new activities that we’ve added over the past year.

If you purchase the DLC, you’ll get a ton of new outfits, to coordinate with your new neighbors. They come in the mail, so you can just go see your handy postal bear.

Here are the full details for the spring update (both the free update and the DLC), courtesy Spry Fox!

The New Neighbears DLC is out right now on Switch, Xbox, and PlayStation for USD $6.99.

In addition, the free for everyone Spring Festival brings Ms. Carouse back to the island along with a new type of flower, adorable ducklings in need of guidance, and more. A new permanent feature, the decoration dye system, enables you to customize the colors of your decorations.

The new bears should be in place tomorrow, in time for the start of the spring festival! We’ll have more coverage as the festivities begin, so stay tuned.

As usual, when I cover Cozy Grove, I’ll add the disclosure that I worked with Kris Lorischild, one of the original game’s writers, back at Zam.com (the forerunner to fanbyte.com).