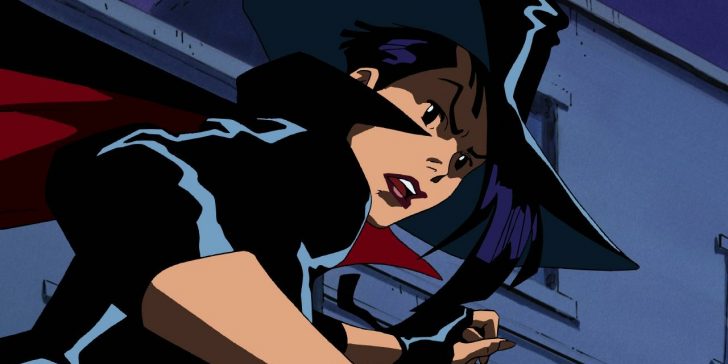 What if Batman was a genetically-engineered superwoman who disguised herself as a goofy male teacher during the day, had a panther for a brother, and fought against a Nazi scientist and his cloned son? Well, that would be Cybersix, an Argentine comic book series that was initially created in 1991 by Carlos Trillo and Carlos Meglia and went on to become an animated series that aired in Argentina, Canada, Japan, and, briefly, the US.

Cybersix was like nothing I’d seen before back when I first caught it on Canada’s Cartoon Network analogue, Teletoon, back in 1999. It featured dark themes, striking animation, and unusual characters. Our protagonist, the titular Cybersix (Cathy Weseluck, Death Note, My Little Pony: Friendship is Magic), is a crossdressing superhero who has an awkward romance/friendship with another teacher during the day and leaps around the city at night, hunting Frankenstein monster guys to beat them up and drink the vials of green liquid that power them, which also keep her alive. Animated by Tokyo Movie Shinsha (The Castle of Cagliostro, Little Nemo: Adventures in Slumberland), the show has this distinctive look to it that isn’t completely in line with typical anime — it feels more like a European comic come to life, similar to CINAR-produced shows of the time like the forgotten Lupin adaptation Night Hood.

The show is mostly structured around Monsters of the Week, but they’re creatively-designed, ranging from flying goblins who hate sunlight to a gigantic floating eyeball. Cybersix also plays with superhero tropes like the secret identity. Much like Clark Kent, Cybersix can seemingly become unrecognizable simply by putting on a pair of glasses — only she takes things one step further, taking the place of a deceased teacher while she spends her nights fighting back against the Nazi scientists who created her. There’s even romantic tension between Cybersix as Adrian and fellow teacher Lucas, who appears to be the more capable and imposing one at school, but often requires rescuing when the bad guys start showing up.

That we never got a Cybersix game is a little surprising. Perhaps if the planned second season had been produced, we would have seen an adaptation on the Game Boy Advance, featuring alternating day levels where you play as Cybersix disguised as schoolteacher Adrian and night time stages where you leap around, hunting Fixed Ideas and fighting huge bosses. Unfortunately, Cybersix was cancelled after its first season — in part due to its low ratings outside of Canada and in part because TMS was at the time shifting to producing more of its own shows rather than doing animation work for western studios.

As it is, we’re unlikely to ever see more of Cybersix in any medium, as Trillo and Meglia died in 2011 and 2008, respectively. Thankfully, the animated series is available to stream on RetroCrush, and at only 13 short episodes, it’s a pretty minimal commitment to get through. If you aren’t sold, then definitely watch the opening performed by jazz singer Coral Egan — it’s one of my favorite television opening sequences of all time.