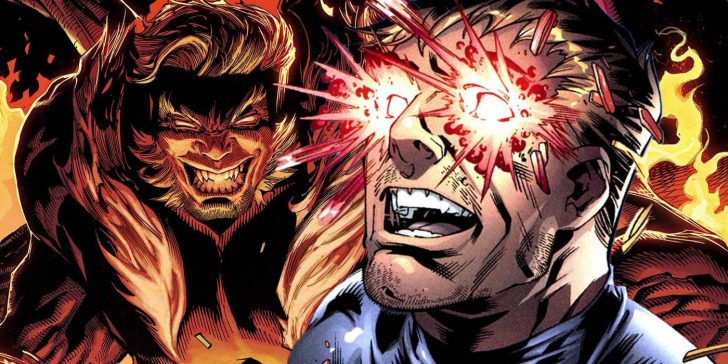 Cyclops’ iconic optic blasts are a staple of X-Men comics, but how they work is so confusing that Marvel’s writers just got it wrong in Sabretooth #1.

Warning: Spoilers for Sabretooth #1 are ahead!

Among the X-Men, Cyclops has possibly the most iconic power, but a recent ‘battle’ with Sabretooth demonstrated just how confusing they actually are in Marvel Comics. The X-Men’s iconic team leader has wielded powerful kinetic optic blasts since his debut in the ’60s, but time and again X-Men writers have misunderstood how those powers work. Often likened to Superman’s heat vision, Scott Summers has been accidentally made more powerful by X-Men writers yet again.

Following Victor Creed’s exile into the Pit of Krakoa, Sabretooth #1, by Victor LaValle and Leonard Kirk, shows that the savage villain has been left to rot. While his body has been condemned to endless torture, he struck a deal with Doug Ramsay to let his mind roam free, where Sabretooth immediately imagines the death and destruction of everyone to ever cross his path. In a bloody, violent sequence, he destroys many, many adversaries, including the group that condemned him, the Quiet Council of Krakoa, his first comic book adversary Iron Fist, and his most frequent opponents, the X-Men. When he faces off against them, he makes quick work of the team, severing Scott Summers’ head almost immediately and using his optic blasts to melt away the remaining X-Men. While their death is swift, gory and done with purpose, some hardcore fans likely took umbrage with this battle.

Sabretooth melting the X-Men with Cyclops’ blasts is just the latest example of how confusing Scott Summers’ powers are for Marvel’s writers. In his debut issue, X-Men #1 by Stan Lee and Jack Kirby, the duo establishes that Cyclops delivers “concussive blasts,” not heat rays. In the very next issue, though, Summers is depicted melting ice from Angel’s wings. Since then, there have been countless instances of this exact contradiction, making it all the way into the fantasies of a murderous X-Men rival. It’s easy to imagine this frequent mix-up comes from another hero with eye blasts: Superman. Since their powers are so visually similar, it makes sense that writers would often cross wires when showing off another hero’s optic rays. For hardcore X-Men fans, however, this excuse just won’t fly.

The X-Men have been a staple of comics for over 50 years, and Cyclops was part of the debut team. In actuality, his blasts should function like a really hard punch, not a heat wave. While it’s easy to forgive early errors as the hero’s creators were working out his powers, seeing Scott melt things with his blasts after almost 60 years is a tough pill to swallow for fans. Of course, over the years those optic blasts have been given greater power, including being a gateway to another dimension, so it isn’t a stretch to see how writers might assume the blasts can emit heat. In this particular case, fans who want to give Marvel the benefit of the doubt could argue that this incident took place in Sabretooth’s mind, and he might assume Cyclops has heat vision, even though the writers know better.

While Sabretooth’s rampage is the most recent example of Cyclops’ powers being misunderstood, it’s unlikely to be the last. Since this classic misunderstanding dates all the way back to X-Men #2, heat vision has all but become a part of Scott’s powers. Of course, hardcore fans are unlikely to ever accept that, and rightly so. The X-Men’s powers are part of what make them so distinct, even if Sabretooth doesn’t fully understand them.

Next: Sabretooth Killing The Marvel Universe is So Much Worse Than Deadpool

Nicholas Hunter is a Comics Writer for Screen Rant. A recent graduate of Kent State’s School of Journalism, Nicholas is a freelancer in the Cleveland area, and was a former managing editor for his university’s newspaper.

Nicholas is based in Northeast Ohio with his fiancée, Addie, and their cat, Maggie.