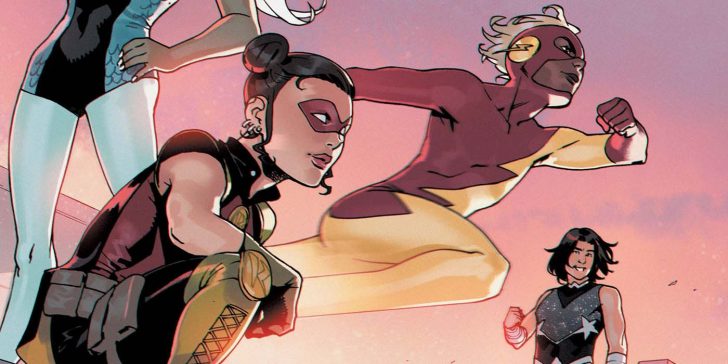 Warning! Spoilers for Multiversity: Teen Justice #1 by DC Comics below

The teen heroes of Earth-11 are coming back in a big way, as the Teen Justice team will return for an all-new miniseries from DC Comics co-starring Jess Chambers’ Kid Quick called Multiversity: Teen Justice #1. We can exclusively reveal that Ivan Cohen, Danny Lore, Marco Failla, and Enrica Eren Angiolini are teaming up for a new six-issue miniseries that showcases the Teen Justice squad – including a new member, Raven.

The teen heroes from Earth-11 are a spinoff from Grant Morrison’s and Ivan Reis’ Justice Guild from The Multiversity Guidebook #1, which featured gender-swapped versions of popular superheroes including Superwoman, Batwoman, and Marsha Manhunter. In the 2020 anthology, DC’s Very Merry Multiverse, which featured an Earth-11 story by Ivan Cohen and Eleonora Carlini, a team composed of sidekicks from the Justice Guild formed Teen Justice. The team consists of Aquagirl, Donald Troy, Klarienne the Witch-Girl (and Teekl), Robin, and Super Girl. However, the most notable member was Jess Chambers, aka Kid Quick, a non-binary speedster who ended up taking the role of The Flash in DC’s Future State Justice League team. Now, the team is returning with a new member and all-new miniseries.

Related: X-Men’s Iceman Makes History With The Prom Date His Fans Dreamed Of

The miniseries’ first issue will also feature a 1:25 incentive variant from Bengal (below) and a 1:50 variant from Marco Failla.

The Teen Justice made quite an impression after debuting two years ago, so to see the team get their own miniseries from Ivan Cohen, Danny Lore, Failla, and Enrica Eren Angiolini is incredibly exciting. Readers will get to learn more about the heroes and villains of Earth-11 while Jess Chambers’ Kid Quick makes their long-awaited return to the comics. Multiversity: Teen Justice arrives in comic book stores later this year.

Next: One Unexpected Superman Foe May Have Found The Best Way To Defeat Him