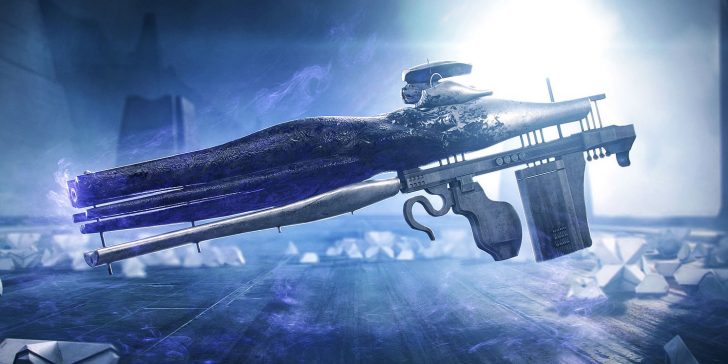 There are a lot of weapons in Destiny 2 and it can be pretty daunting to know which one you should bring into a raid or difficult activity. This is only enhanced with exotic weapons, the rarest type of gear in Destiny 2, and items you can only have one of equipped at any time. This makes it critical to know which exotic weapons to hunt for or purchase from the Monument to Lost Lights in The Tower. To alleviate this burden, I have put together a tier list of every single PVE exotic currently in the game so you know which ones you should be infusing and bringing with you into Destiny 2’s most difficult activities.

Author’s Note: Developer Bungie is constantly buffing and nerfing weapons each season, so a weapon’s ranking can change. We also consider seasonal mods and catalysts, as these can often have a dramatic impact on a weapon’s effectiveness. Remember, you can pretty much use any exotic in normal PVE activities, such as Strikes or Dares of Eternity. I will be solely focusing on Destiny 2‘s endgame content, such as raids or high-difficulty missions like Nightfalls, specific exotic quests, and Lost Sectors.

Whisper of the Worm

No Time to Explain

What Do the Rankings Mean?

Now that we have our tier list, it’s time we go over what each of these rankings actually mean. I am solely looking at Destiny‘s PVE endgame when judging where a specific weapon falls. Whether a weapon performs well or not in a normal story mission or when you’re running around the EDZ will not be factored. There are many cool weapons in Destiny 2, but a lot of them simply don’t cut it when you’re facing some of the toughest challenges available.

However, there are always weird scenarios and metas popping up that may elevate a specific weapon above others. There are a lot of factors to consider when judging an exotic weapon, but I am looking more at the overall performance of the gun rather than if it works in specific niche scenarios. There are only a couple of exceptions to this rule, which I will go into more detail about in this guide’s Highlights section. Otherwise, these exotics have been ranked from S to D tier, with the former being the best and the latter being weapons you will pretty much never need to use.

S — Must have for PVE endgame content
A — Terrific and works in nearly all PVE endgame content
B — Good, but unnecessary for success. Works well in certain endgame activities or encounters, but not all.
C — Suboptimal. There are better choices, but it can get the job done if you really need it to.
D — There are better and more useful Legendary weapons than these.
Telesto — I gave Telesto its own slot because I’m too afraid it will glitch my ranking. It’s best to quarantine it.

If a weapon is in the S tier, it’s the absolute best of the best. You almost cannot go wrong with using any of these weapons as they are frequently used in the most difficult content. There’s rarely ever a scenario where an exotic like Gjallarhorn or Witherhoard won’t be helpful. A tier is reserved for weapons that are fantastic but may not be useful for every single encounter in a dungeon or raid. These aren’t the “best in slot” options, but damn if they aren’t close. An A-tier weapon can improve virtually any build without any additional mod or subclass changes.

B-tier weapons are solid, but you can do better. Typically, these weapons serve more niche roles but are still powerful when combined with the right nods or exotic armor pieces. Thorn and Lumina are prime examples of this — they are strong, but when you build around these Hand Cannons, they can be absolutely devastating. That being said, if push comes to shove, there are better exotic weapons to equip if you’re struggling to complete an activity. C-tier weapons are fine. They’re either extremely niche or decent alternatives if you don’t have any of the best exotics. Finally, we have the D tier, which is just underwhelming or borderline useless in endgame PVE activities. You almost always can find better Legendary weapons than the ones in this category. D-tier guns shouldn’t be used unless you have absolutely no other choice.

How Are the Rankings Selected?

I know what you’re thinking: “Why is my favorite exotic in C or D tier? I love that weapon!” Look, there are a lot of fun weapons in Destiny 2. However, endgame content is a different beast entirely as it often requires players to use loadouts that can deal with exceptionally strong enemies or bosses.

For example, D.A.R.C.I. can output decent damage, but if you need to kill a Champion or do a lot of burst damage to a boss, then Izanagi’s Burden is simply the superior choice. This ranking wasn’t decided on if a gun can function in a Grandmaster Nightfall — skilled players can most certainly make anything work — but if it’s objectively the best choice.

There are many factors to consider when ranking a weapon, such as its damage values, perks, what slot it takes up, and how if it fills the roll designed for it. Damage values are simple enough — it’s a weapon’s destructive force versus another. Yet we also need to consider an exotic weapon’s role in your loadout. For example, Thunderlord and Osteo Striga aren’t going to be your primary boss damage weapons, but they are exceptional for clearing out waves of adds. That’s their role: to kill lots of enemies in as efficient a method as possible.

It’s also important to note I am not considering a weapon’s performance in PVP content for this tier list. This is mainly because what’s useful in the Crucible is much different than a Grandmaster Nightfall. Weapons like The Colony, The Chaperone, and Hawkmoon can be devastating in PVP but underperform in PVE. (This is fine since Bungie clearly designs specific exotics for specific portions of the game.) As for Gambit, there was some consideration for this activity since it’s a mix of PVP and PVE. That being said, Gambit is still one of the least played modes, and only a small handful of exotic weapons in our lower tiers are truly impactful in this mode.

I should also mention this is ultimately a subjective list. Destiny 2 is a game with a lot of systems and mechanics, so you can make use of any gun if you’re truly skilled enough. When compiling the tier lists, I pulled not only from my own experiences as a seasoned Destiny 2 player but also how these guns perform in as much of a controlled environment as possible. You may disagree with a selection — that’s totally fine! This is simply to help those looking to get into the toughest PVE challenges offered in Destiny 2 or for those unsure of what weapons they should prioritize getting.

Hard Light: Hard light might seem like an odd choice to put in B tier, but hear me out. It may not really stand out when playing with others, but it’s a phenomenal weapon when used for solo activities. The ability to quickly switch elements to deal with the Match Game modifier is superb. It also has decent stopping power. You may not always use Hard Light, but it’s a handy weapon if you want to solo a dungeon or Legendary tier activity like an exotic quest. Plus, it can currently get Overload rounds, which makes it even better.
Parasite: Parasite can deal huge damage numbers. But the reason it isn’t S-tier is that you essentially have one shot at its maximum potential before you need to farm up to 20 kills more kills to buff its damage. If the gun was more consistent, I’d move it up. As of right now, the amount of prep time needed can be too inconvenient.
Dead Man’s Tale: Dead Man’s Tale is one of, if not the best exotic Scout Rifle in the game. While it’s exceptionally strong by itself, the ability to come with numerous perks makes it a little difficult to place in a single tier. For PVE, I split it up, with the best roll (Vorpal Weapon) getting the A-tier treatment while all other rolls are in the B tier. This doesn’t mean non-Vorapal Weapon variants are bad — they just aren’t the best they can be.
Collective Obligation: The newest raid weapon, Collective Obligation, is a unique beast because it seems like it should be really strong in the current Void-focused meta. However, with so many ways to trigger different Void effects like Volatile Rounds, you can be more destructive with a Void Legendary gun like Funnelweb. Once the Void Artifact mods leave next season, it’s possible that this gun will rise a little higher in the ranks. It’s also down in C tier for having quite possibly the worst ironsight in the entire game.