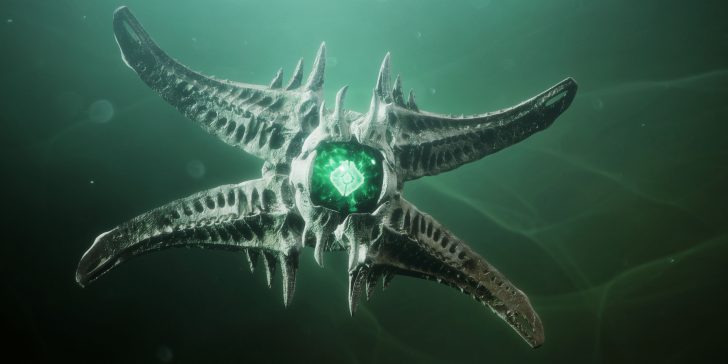 With the Vow of Disciple raid completed, a new mission on the Enclave’s evidence board is available. Called “Report: Pyramid-Inspect,” players will venture into the opening portion of the new raid to stop the Scorn. Set at 1540 Power, this is a fairly simple quest that can be a little confusing if you haven’t tried the Vow of Disciple raid.

How to Complete Report: Pyramid-Inspect

Once you’ve collected the quest, open up your Throne World destination map and select the Preservation mission at the top left. When you load in, you’ll need to kill a hoard of Hive enemies outside of the gates. You will see an illusion of Savathun mini-boss, which if killed will despawn all other enemies outside. Upon defeating this boss, head through the gate, hop on your Sparrow, and follow the path through the swamp until you reach a small barge with an odd spiral-shaped device on it.

You will begin gaining stacks of a debuff called Pervading Darkness, which will begin increasing in stacks from one to 10. If it hits 10, your screen will go black and you’ll be instantly killed. Standing next to the barge will remove the debuff slowly, so make sure to stick next to it while you’re fighting the Scorn that spawns. Among the enemies, there will be a yellow bar Abomination called a Knowledge Bearer. Slaying this foe will trigger the appearance of a bunch of diamond-shaped items surrounded by dark orange columns of light (shown below). You will need to gather all nine that spawn and bring them to the barge. Your Guardian can only hold three — you’ll know when you’ve hit the max carry limit because you’ll have a buff called Overflowing Knowledge. Once you’ve collected some, bring them back to the barge to deposit before going out to get more. After depositing all nine, hop onto the barge and ride it to the next area. Don’t worry if you fall off, as you’ll only get stacks of Pervading Darkness when the barge stops moving. This cycle of riding the barge, killing the enemies around it, and collecting all the darkness crystals will continue five more times until the barge parks itself in a room under the pyramid ship. Additionally, make sure you keep an eye out for white motes that drop from Scorn, as collecting these will fill up the second objective of this quest! Kill all of the Scorn enemies, then enter the room with a symbol of two red claws and a black triangle. Go into the room, kill all the Scorn inside, and then head back out into the main chamber. There will be more Scorn waiting for you, so quickly dispatch them and then head to the far end of the room. You’ll have another wave of Scorn appear, so deal with them before heading into the room with the bright red square (shown above). Surprise, there are more Scorn for you to slaughter, so please escort them from the pyramid ship.

After killing this group, go to the main chamber and look for the final door to open directly along the wall to your left when you exit the red square room. This door takes a moment to open, so wait until you can traverse down the long, thin hallway. At the end is a final room filled with three Scorn Cheiftan bosses and a bunch of other Scorn enemies. Focus on the bosses and quickly dispatch them. Upon their deaths, you will be asked to return to the evidence board on Mars. Head there and turn in your findings to complete this quest.