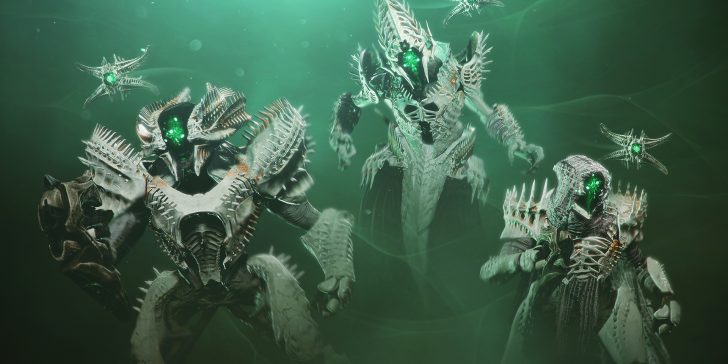 With the new Vow of the Disciple raid released this weekend, players can obtain all of the Shattered Suns lore books for the Imperious Sun Ghost Shell. There are a total of ten books, five of which can be obtained in either the new raid or the Preservation mission found in the Throne World destination menu. The last five are exclusive to the Preservation mission and these can be obtained with a group or by yourself. Unlike what many suspected, the lore books are not time-gated and can be all grabbed right away. The first five lore books can be obtained in either the new raid or Preservation mission. Once you load up either activity, fight through the barge encounter until you enter the pyramid ship. Drop down the large hole and follow the path until you reach a room with a bunch of symbols in displays. Along the right wall will be an opening you can jump through (shown above) which will take you to a hidden area that has a bunch of symbols on the wall in three rows of four. That being said, the bottom row of symbols will change each time. So using the photo above, my correct sequence would be:

If you are solo, you need to melee the first symbol again (in this case Teardrop) to trigger the lore book. For those doing this in the raid, you need to activate all four symbols all the same time. Once all the symbols have been triggered in the correct order you will get a single entry in the Shattered Sun lore collection. To get the remaining four books tied to this puzzle you either need to restart the Preservation mission and do the puzzle all over again or return here in subsequent attempts of the raid. The last five are tied solely to the Preservation mission and can only be unlocked after you beat the level. So fight all the way to the final three bosses, kill them, but do not go to orbit. Instead, approach the podium near the edge and interact with it. You will get some dialogue from the raid boss Rhulk that reveals his past. With the Mission End timer going, head back to the main room where you killed most of the Scorn and go left. You will see another podium along the edge of the arena. Interact with it to get the next lore book. Remember, you cannot get Inspect the next podium until the dialogue from the last one is over. Now turn around and head back across the arena to the door with the Red Box symbol over it. Go down the stairs, take a left, and you can find the next lore podium along the right wall. You’ll need to get a bit closer to see it since the room is very dark and you’ll be using your Ghost flashlight. Leave this room, go back up the stairs, and then head right towards the other room you ran down. This entrance will have the symbol of two red claws and a black triangle on it. Inside, you will see the lore podium at the very end of the room by the small staircase. The final podium is right by the entrance you used to get into the area. Jump up to this platform and interact with the last podium to get the final lore book. If you got all the five lore books in the puzzle room, this will complete the triumph and unlock the Imperious Sun Shell to use however you want.