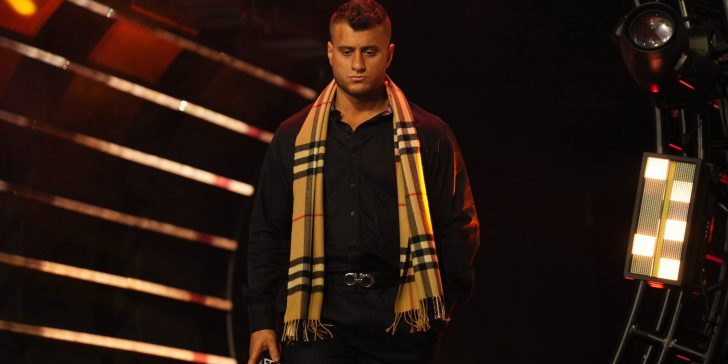 On Wednesday night, at the AEW Dynamite and Rampage taping in Bridgeport, Connecticut, MJF did something different.

“[I]n their hands, they’re holding rolls of quarters,” he said (transcription h/t CageMatch.net user Rocky7), describing his then-new football teammates he expected to become his new friends while in his tweens. “And all of them decided to throw the quarters at me as hard as they physically could, and they said Pick it up, Jew boy, pick it up.” The live crowd in Bridgeport clear did not know how to react to that, seemingly having expected something much less virulent that they could cheer since MJF is an asshole.

“I went home, and I cried, and I cried, and I cried, but finally I stopped cos I realised today’s Friday, and that means today I get to meet my hero CM Punk at an autograph signing! CM Punk, my hero, the guy I looked up to, CM Punk, the best in the world! That day meant everything to me, and when I went back home, I made a promise to myself that I was going to be just like my hero CM Punk, I wasn’t going to be afraid to speak up for myself, I, this 5 foot nothing ADD riddled Jew boy, was gonna become the best in the world!”

Then it all came together: In January 2014, right as young Max Friedman had really gotten his shit together, CM Punk peaced out on WWE and the larger pro wrestling world. “January 2014, you leave me when I needed you most, when I believed in you!” MJF continued. “You left me! You left all of us! That’s when I realised if the best in the world couldn’t do it, why could some dumb, 5 foot nothing, ADD riddled Jew boy?” He closed with this: “At Revolution, March 6th, you can choke me with the chain, you can whip me with the chain, you can make me bleed buckets, but I will not quit! Because if I quit, then I’d be no better than you. And we all know that’s not the case! Because my name is Maxwell Jacob Friedman, and I’m better than you… and you know it!”

The segment then closed with Punk walking out with no music or microphone, asking “Is it true? Is it real?” and getting an answer in the affirmative from an emotional MJF, who walked off.

There’s a lot to unpack, some points more obvious than others.

Pro wrestling’s history of dealing with bigotry and other social issues in storylines is, at best, absolutely terrible, with the best thing you can say about such storylines being that the oppressed minority babyfaces usually defeated racist white heels in the end. In a genre of entertainment that, for so long, was far from open about being preordained entertainment, blurring lines around real world problems that affect the audience as much as they do the characters is a dangerous game. But even in the thirty-plus years that the wrestling business has been more open—WWE’s admissions before state legislatures while pursuing deregulation are probably the best dividing line anyone could come up with—pro wrestling shows have retained the same basic formatting as they did when they were supposed to be legitimate sports competition. How do you address sensitive issues in the real world in that framework?

There are no opening or closing credits. If we go just by this one episode of Dynamite from February 23, 2022, then characters that simply use the real names of those portraying them include Bobby Fish, Jeff Parker, Matt Lee, Tully Blanchard, Alex Abrahantes, Ricky Starks, Jade Cargill, and Bryan Danielson. And while MJF’s real middle name is not Jacob, his real name is still Max Friedman. Non-wrestling fictional shows don’t do that outside of very limited circumstances, and they also don’t take sudden breaks in the body of the show to allow an actor to reveal his cancer diagnosis or another to salute a co-star for making the decision to take control of his life to enter rehab for alcoholism. Even if we all know what pro wrestling is these days, it’s still different.

All of this is why MJF’s promo in Bridgeport working as brilliantly as it did is truly something to behold. Sure, it wasn’t the first time he had invoked that string of specific traumas from his youth, but the previous most well-known example, before his “Loser Leaves MLW” match with Mance Warner, was a lot more black and white. There, the similar bullying story, while used tastefully, was still in service of MJF hatching a decade-long revenge plot against the bully and telling the story to show just how violent and unhinged he could be. MJF was still the clear heel because he held onto what happened in an incredibly unhealthy way and used it to become a worse person.

The promo directed at Punk took a very different course, though. It did involve long simmering anger boiling over almost a decade after the fact, yes, but the promo wasn’t where everything got out of control. Instead, MJF weaved his way through the Punk feud so far to explain why it was happened. He wasn’t simply going after Punk to be an asshole or to snuff out the previous generation version of himself. And that photo of young Max Friedman meeting Punk at an autograph signing that Punk showed off the week before? It wasn’t a “gotcha.” It was something much deeper.

Eight years is a long time, so regardless of whether or not you were deep into internet wrestling geekery when CM Punk walked out on WWE in January 2014, it may be difficult to reconcile the degree to which the collective fandom lost their shit. With Punk having used his Twitter account much more as his personal social media outpost than you’d expect from a celebrity of his stature, his going dark  overnight was something that some fans understandably found alarming. (It probably didn’t help that it was fairly well-known that ghosted a number of friends and acquaintance that he made through wrestling, pretty much everyone that wasn’t in his immediate social circle. Or that little news was leaking out about what the hell was going on with him regardless.)  But that sense of alarm and attachment soon took a much uglier turn.

101 days after a burnt-out CM Punk effectively disappeared from pro wrestling and public life in general, his longtime friend Natalie Slater published an article in RedEye, the Chicago Tribune’s publication for young adults, about what he’d been going through. “[H]e’s the recently retired seven-time World Champion, and he’s one of the most isolated people I’ve ever known,” she wrote to open the key section of “My friend is famous, and it sucks.”

“A few weeks ago he found a young fan and his mom cramming Easter candy into the mail slot of his front door,” she continued. “Just before that, he walked out of his back door to throw out the trash only to be met by fans camped out in his alley for hours just to see him. We get mad about how much of our information Facebook is selling to advertisers, and this guy has people stalking his dumpster. But if he complains, people roll their eyes and say if they had his money, they wouldn’t complain about anything. The money? I’m sure he likes it just fine, but I often wonder how much of it he would trade to be able to go to a Cubs game without it ending up on TMZ. The nervous ninny in me lives with the constant fear that someone’s going to stab him.”

That brings us back to 2022. The reason that MJF bringing up the antisemitism he faced in school works in context and doesn’t feel cheap because his hurt, his trauma is still being treated as entirely legitimate. What those bullies did to him was fucked up and he has every right to air his grievances about it, even all these years later. (To say nothing of it landing harder in a state where multiple incidents of antisemitic hate have made the news in the last few years and where the Ku Klux Klan had a surprisingly strong northern presence for many years.) But it’s also a massively shitty thing to do to guilt his favorite celebrity from his teen years for disappearing from public view for several months. That goes doubly so in light of the things that Punk said in his return promo last August. Turn of the Knife

Teenaged Max Friedman had entirely understandable reasons for being crushed by CM Punk’s strange path to temporary retirement.  But the MJF who turns 26 in a few weeks is a fucking asshole for not just trying to make Punk at fault for the remnants of the trauma he still feels from those antisemitic bullies. And he’s an even bigger asshole for continuing to do that knowing that Punk left to deal with his own mental health. There’s a lot of room for nuance here, the kind of nuance that would have been missing in most pro wrestling storylines that tried, unsuccessfully, to deal with real world issues. Enough nuance that the bulk of this paragraph is probably too black and white.

When the Bridgeport segment ended with Punk walking to the ring sans entrance music and microphone to ask MJF if what he said was true, he looked horrified by the idea that it was. And that makes sense, too. Sure, it’s not his fault. But that what makes it brilliant that he can still feel guilty about it. This stuff is complicated. For every fan who over-identified with Punk and started stalking him in Chicago, there’s a fan like the many who have openly spoken of using someone like Paige or Jon Moxley’s openness about their traumas and their struggles with addiction as inspiration to better themselves. Becoming attached to and finding inspiration in a celebrity, like a teenaged MJF who probably imagined CM Punk happily punching Nazis with him and found inspiration in that? That’s OK. Making that celebrity responsible for every bad thing that ever happened to you, especially knowing that they’d take it to heart? That’s a problem.

And that’s why this worked in a way that nothing remotely like it that’s come before it ever has.