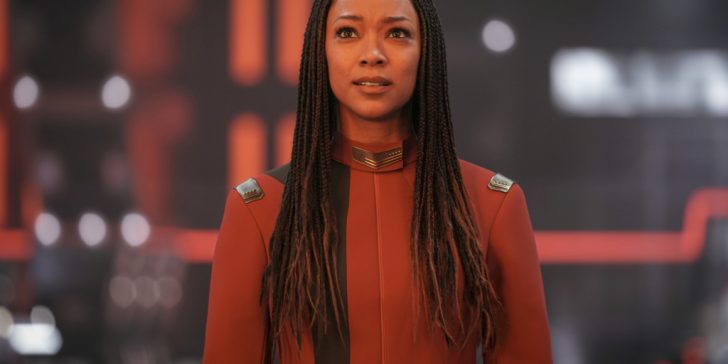 For weeks, Star Trek: Discovery has been building towards the fateful first contact between the United Federation of Planets and the mysterious extragalactic beings they call Unknown Species 10-C. Now the moment has finally come, but are Captain Burnham and company ready for its Arrival? That’s right, this week’s episode, “Species Ten-C” owes a lot to the recent Best Picture nominee, but puts enough of a Discovery twist on its depiction of complex transgalactic linguistics that it feels like a good cover rather than a rip-off.

“Species Ten-C” has a pretty meaty A-plot, which follows Burnham, Saru, and the Federation diplomatic envoy as they attempt to communicate with the advanced entities whose gauge mining of the Milky Way Galaxy has become an imminent threat to United Earth and Ni’Var. With only 19 hours remaining before their Dark Matter Anomaly destroys both of Burnham’s home planets, Discovery arrives at the outer edge of the impenetrable hyperfield that protects 10-C space. When traditional communications yield no response, Burnham decides to make use of some of the hydrocarbon pheromones that the crew collected last week, which they believe represent 16 distinct emotional states. They spray the edge of the hyperfield with the hydrocarbon that associates with a feeling of peacefulness, as if to say “We come in peace,” and soon Discovery is snatched out of space and pulled into the hyperfield by a massive translucent tentacle reminiscent of James Cameron’s The Abyss. Discovery is now trapped, with their engines and weapons disabled, but they’ve piqued the 10-C’s interest, and the 10-C send a starship-sized ambassador to approach Discovery’s shuttlebay and attempt contact.

The communication experiments seem heavily inspired by the 2016 Denis Villeneuve film Arrival, which also centers around a group of scientists attempting to decipher the unusual language of a giant non-humanoid alien whose form is obscured through a cloud of mist on the other side of a wide transparent window. (Arrival itself adapts a 1999 short story by Ted Chiang.) As much as I’d rather see Star Trek innovating than imitating, you’d be hard-pressed to find a better on-screen depiction of practical first contact efforts on which to iterate, and it’s possible that some of the similarities come from visiting similar research on theoretical xenolinguistics. The 10-C’s brand of communication is also sufficiently different from that of Arrival’s Heptapods — the 10-C’s conception of language is apparently so different that they have no expectation that the Federation’s humanoids can grasp it. Instead, they create a sort of bridge language, combining three-dimensional patterns of flashing lights with hydrocarbon chains that together contain both mathematical equations and pheromonal markers that essentially function as emoji. The Federation and the 10-C gradually develop a method of communicating via if/then statements, so long as they’re able to come up with mathematical representations of each idea that are recognizable to both parties. The crucial exchange near to the end of the episode is as follows:

Silly as it sounds (and it sounds very silly), that’s a massive breakthrough, the result of fifteen hours of effort on behalf of the USS Discovery crew and no doubt weeks of work by the Star Trek: Discovery writers’ room to turn this into something worth watching. And it is — while certainly nowhere near as intriguing as Arrival, Burnham, Saru, and Dr. Hirai’s (Hiro Kanagawa) effort to puzzle out the 10-C’s language is genuinely fun to watch. Star Trek science is best when it’s celebrating the process rather than simply throwing around a combination of real, theoretical, and invented terminology. The riddle of the 10-C is one that you can actually solve along with the crew. If there’s a weakness to this part of the story, it’s that a viewer can easily get a few steps ahead of Burnham and company and have to wait for them to catch up, but they’re never more than 30 seconds behind. The story even makes room for key contributions from some of the minor bridge crew, like new communications chief Lt. Christopher (Orville Cummings) and the oft-forgotten Lt. Commander Nilsson (Sarah Mitich). Discovery presents scientific achievement as the product of collaboration between great minds with different points of view, rather than mad geniuses whose indifference to or mistreatment of other people must be tolerated in the name of progress.

Speaking of single-minded, amoral scientists, remember how Ruon Tarka (Shawn Doyle) installed a hacking device aboard Discovery last week? Zora (voice of Annabelle Wallis) still hasn’t detected that Tarka and Book’s ship is attached to her hull or that Commander Jett Reno (Tig Notaro) has been abducted, but she does have the nagging feeling that something isn’t quite right with her. Tarka’s malware is manifesting as mild anxiety in Zora, like the feeling that she’s forgotten something important but doesn’t know what. Rather than calling a computer technician to do a diagnostic, Stamets and Adira page Dr. Culber to talk her through the problem. Turning Discovery’s computer into a sentient being doesn’t just add a character to the cast, it also allows the storytellers to approach technical problems from an emotional or psychological perspective, which is the domain in which they’re most comfortable. The percentage of Discovery’s conflicts that are solved via therapy is getting a little ridiculous, but this particular emotional check-up happens mostly off-screen and doesn’t become irksome, especially since the A-plot is so technical.

There’s a bit more character material peppered throughout the episode between Captain Burnham, Saru, and Ni’Var President T’Rina (Tara Rosling). Saru is startled when T’Rina, who he’s just started dating, is noticeably cold to him during a briefing on the first contact mission. He voices his puzzlement to Burnham, who is able to provide him a cultural explanation for T’Rina’s change in behavior based on her own experience growing up on Vulcan. It’s a brief digression in the episode that advances the Saru/T’Rina subplot while also serving as a small-scale, low-stakes example of how easy it is for two cultures, even similar ones, to misunderstand each other, the same sort of conflict they’re trying to prevent with the 10-C.

Later, there’s another scene in which Burnham and Saru privately vent their feelings and comfort each other, a sweet moment of vulnerable friendship between the surrogate siblings that underscores the incredible pressure that they’re under. I like this moment of intimacy, but it comes towards the end of the episode, interrupting the rising tension of the story and stopping the plot cold. It does not change anything for either character, it merely gives the two of them an opportunity for them to express their love and gratitude for each other, something that has never been in doubt this season. Sonequa Martin-Green and Doug Jones infuse that love into every interaction they share on screen, including in this very episode when Burnham helps Saru with his romantic life. Is it really necessary to hit pause at a critical moment of the story we’ve been building to for eleven weeks so we can do a Brother Check-In?

Do People Still Read Maya Angelou in the 32nd Century?

Book’s ship sneaks inside the 10-C’s hyperfield just as planned, cloaked and clinging to the underside of Discovery’s hull. While Discovery’s crew focuses their efforts on communicating with the aliens, Ruon Tarka works out a way to escape the energy orb that has enveloped both their ships. The plan is to break free, fly directly to the 10-C’s power source and steal It, instantly collapsing the DMA and saving billions of lives in the short term but possibly triggering a war with the 10-C. Book considers this a backup plan, to be carried out only if diplomacy has failed, but the captive Jett Reno can tell he’s in total denial of Tarka’s indifference to the peace talks. From her cell in the corner of the bridge, Reno sneaks a peek at some of Tarka’s calculations and deduces that his plan will lead to much more destruction than he’s led on. Forcibly removing the power source will cause the hyperfield to implode, destroying anything inside in mere minutes, and will create a deadly wave of toxic waste at the DMA’s current position. However long Tarka has been aware of this, he clearly has no plans to tell Book, so Reno spills the beans.

Once exposed, Tarka once again tries to move the goalposts, saying that they, Discovery, and maybe even the 10-C would have time to escape the collapsing hyperfield and that the Federation would have time to figure out what to do about the fallout before anyone else gets hurt. By now, it’s transparent that Tarka would accept any negative consequences to the galaxy as long as he gets what he wants. That includes commandeering Book’s ship and throwing him in the makeshift brig with Reno. Just as Burnham and the gang have managed to establish a dialogue with the 10-C, Book’s ship pushes off from Discovery, breaks free from the containment field, and makes a bee-line for the power source. Sensing a trick, the 10-C break off the talks, and Discovery is trapped, voiceless and powerless in their defense field, with four hours remaining before DMA doomsday.

Book has been too blinded by grief and guilt over Kwejian to see it, but this has been the obvious outcome for weeks. When the two of them betrayed Starfleet together, it seemed like Book was entering this arrangement with his eyes open, but now he looks like a fool. Tarka has never obfuscated that his and Book’s goals aren’t the same, that they’ve merely been attainable via the same means. He has only ever framed stopping the DMA as a way for others to benefit from him getting what he wants. If there’s a lesson here — and since this is Star Trek, I will assume that there is — it’s “When people show you who they are, believe them the first time.”

The silver lining from this very predictable thing happening at the end of the penultimate episode is that I have no idea what to expect from the finale. How will the Discovery crew salvage the peace talks with the 10-C? Will a way be found to stop Tarka without also sacrificing Book and Reno? Will Captain Burnham finally meet her no-win scenario? Next week, we’ll get our answers and finally see the shape of the entire story, unpack its themes, and determine where this thirteen-part saga ranks in the halls of Star Trek history.