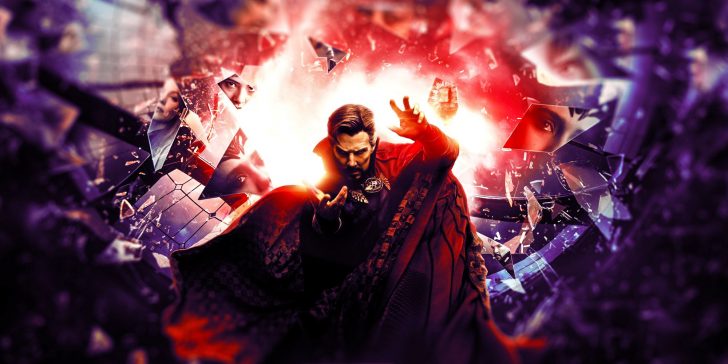 Benedict Cumberbatch says that Doctor Strange in the Multiverse of Madness sets up an exciting MCU future for his titular sorcerer. In less than a week, Marvel will return to the big screen via the Sam Raimi-directed flick. And like most May releases for Marvel Studios, the events of Doctor Strange in the Multiverse of Madness are expected to have significant repercussions for the MCU moving forward. This marks Cumberbatch’s second solo film within the franchise, though it is his sixth onscreen appearance overall.

Doctor Strange 2 also features the return of Scarlet Witch (Elizabeth Olsen) and the introduction of America Chavez (Xochitl Gomez). But despite many moving pieces, its core character remains the MCU sorcerer. Doctor Strange’s decision to help Peter Parker (Tom Holland) in Spider-Man: No Way Home results in serious consequences concerning the state of the multiverse. Despite his good intentions, Strange’s actions get him in trouble with the MCU’s version of the Illuminati. It’s uncertain how everything will be resolved at the end of Multiverse of Madness, but however things pan out, Cumberbatch promises that it sets up an exciting way forward for Doctor Strange.

In a new interview with Extra while promoting Doctor Strange in the Multiverse of Madness, Cumberbatch reveals he’s excited to find out fans’ reactions to the film. This is especially so since the events of the film set up a great future for Doctor Strange. Read his full answer below:

“I really can’t wait to see what the fan reaction is to this [Multiverse of Madness] and where it takes Strange…but I think it sets him up for a really exciting future.”

Understandably, Cumberbatch cannot get into specifics about Multiverse of Madness. Since debuting in 2016’s original Doctor Strange, the actor has mastered the art of promoting an MCU film without accidentally revealing any spoilers. But, Doctor Strange’s impending return after his second film isn’t surprising. Firstly, as an important player in Marvel Studios’ multiversal narrative, it makes sense that he will continue to be a primary player in that arc. Secondly, Strange is still due for a threequel, and lastly, he is expected to be one of the prominent Avengers members moving forward, despite Cumberbatch claiming that Doctor Strange isn’t a member of MCU’s premier team.

As to how Doctor Strange in the Multiverse of Madness sets up the character’s future? It’s difficult to say at this point. Aside from Marvel Studios being extremely careful about what to reveal, the events of the Raimi-directed film can also drastically change the MCU as a whole. Given the many Doctor Strange variants in Multiverse of Madness, Marvel Studios can get creative in mapping out what comes next for the sorcerer. And since there’s no rush in wrapping up his story, they can be bold about where his personal journey takes him.