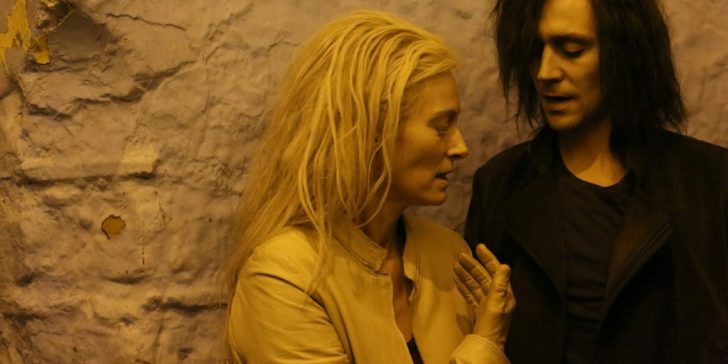 This week on You Love To See It (Fanbyte’s premiere movie rewatch podcast), Fernanda and I continued spring fling month with Only Lovers Left Alive, a very chill 2013 movie about Adam (Tom Hiddleston) and Eve (Tilda Swinton), two ethereal creatures of the night who are very much in love. We’re watching movies about characters we have a crush on all month, and this was Fernanda’s pick: featuring Adam the very sad, very talented, very pretty vampire.

The episode is embedded just below, and you can download it here!

As I did last week, I’m presenting our synopsis and our “must discuss” show notes, which we prepare before recording. Our discussion does have spoilers, in case you were worried!

In case you weren’t aware, and need to be welcomed directly into the house of the vampire that is Only Lovers Left Alive: this is essentially a super chill vampire film. It’s a movie about two ethereal beings, Adam and Eve, who are vampires, they are very much in love, and they live on different continents. It’s all vibes, all day, and while some things do occur in the movie, it’s not exactly action packed (or ever scary). It’s more of a meditation on love, and music, and literature, and being extremely cool.

OK, so first the reason why we ended up landing on this for my crush: I didn’t really “get” Tom Hiddleston at first. For instance, when he and Taylor Swift had that brief romance, it did seem like a weird disconnect from the likes of Jake Gyllenhaal and John Mayer — both of whom, for all their infinitely douche-y vibes, at least emitted *some* vibes. Tom Hiddleston was just so… Nondescript? But then I watched Only Lovers Left Alive for the first time. And about 40 minutes in I was like “Oh. NOW I get it.” And I’ve been nourishing moderate levels of thirst for Tom Hiddleston ever since (I will neither confirm nor deny that might have something to do with the fact I finally realized he’s kind of tall).
Having said that, arriving at this movie for the month was a journey. I really did think it was gonna take me 5 minutes to make my pick, but I hadn’t really stopped to consider all the factors. See, when you’re discussing horniness, the umbrella is really quite large. You’re allowed to be a little horny for people who don’t necessarily seem great, because horniness is more primal, it’s allowed to exist in a somewhat raw realm. The word “crush”, however, kind of ties into something more pure, more beautiful. Puerile, even. So when I did a sort of emotional free association game to try to land organically on picks, I found myself being thrown all the way back to my adolescent crushes — which often, when you ponder the fact we’re dealing with straight men in early-to-mid 2000s movie, don’t really withstand the test of time. I think if I’m being honest with myself, my quintessential movie crush is Paul Rudd in Clueless. But we didn’t wanna do Clueless. I then had to contend with harsh realities about myself, like the fact that Cruel Intentions’ Sebastian and the Heath Ledger character in 10 Things I Hate About You really did hold an inordinate amount of space in my adolescent brain, which makes me not only a bit problematic but also a cliché. Which, by the way, was another aspect of this; I like to think I’m emotionally evolved to care about people’s opinions, but I’m not. I wanted to make a pick that made me seem cool and interesting and kind of edgy, but also revealed something about me and my personality. I wanted to impress you guys, I really did. But my attempts just seemed… Dishonest. And so an emo vampire it is, folks.

If we’re being objective, it’s obvious that the Tilda Swinton character (Eve)  is much cooler than the Tom Hiddleston character (Adam). I mean, he’s the introspective mopey shoe-gazing music emo guy with misanthrope vibes, while she is the take-charge, sensitive-but-sensible, let’s-make-the-most-of-shit kind of lady. He kind of sucks, honestly. HOWEVER, it is my theory that we all have our specific kinds of suckiness, and his kind of matches mine. I, too, and an introspective mopey emo girl who contaminates the environment with her self-pitying and tendency to blame others for her own misfortunes. The fact that he can play all instruments and loves science and used to hang out with Mary Shelley doesn’t hurt. I must say, having watched this twice, this is not someone I would consciously pick as my crush because it does make me seem terribly uncool. But I had to be honest with myself and admit that if I met Adam in real life I’d probably be really annoyed by him but also do my darndest to win him over and help him enjoy the fun parts of life. Also, he’s kind of tall.
On the “tough realizations about myself” note: Seeing Adam’s reaction to Ava’s presence made me realize that’s probably how my sister’s husband feels when I visit!
Now, on to the movie… I admit it took me a while to cave in and watch it for the first time. My husband kept bugging me to watch, but I was reluctant because a) I feel really vampire’d out and b) I was put off by the movie’s too-cool-for-school vibes. And while I remained vampire’d out and the movie *is* too cool for school… It’s still such a nice watch. I think I just kept waiting for it to get too cerebral or try to inject some pseudo profound philosophy that would turn me off completely, but that’s not where it goes. If anything, the pace picks up in the second half and it starts looking more like a “regular” movie. It really is just an odd film with a wacky little take on an overused theme. It does have a self-indulgent air to it, not gonna lie, and at points I do think it drags a little. But nothing that ruins it for me — thanks in no small part to Tom and Tilda, who really wore these characters in a very endearing way even at their most pretentious.
What I like about the movie is that, even though it does show these vampires as extraordinary beings, the focus is not on the extraordinary stuff. No matter how powerful Adam is, he still has to meet with some snarky dude at a blood bank in order to get food, and Ava still has to figure out layovers as she purchases plane tickets over the phone, and Marlowe is still bitter that “illiterate philistine zombie” Shakespeare took credit for his work, and they still get to be lonely and morose and bored. Because how WOULDN’T you get bored. Can you imagine living for centuries??? I’ve lived for 32 years and I already feel like I’ve seen enough. I love that they live separately, despite their clear adoration for each other, because also: Can you imagine living with someone for MORE THAN 100 YEARS? These little details, I think, are what makes the movie. Rather than grandiose reflections on the weight of immortality, we get these little snippets of what existing in the world entails — which, let’s face it, is overwhelming enough as it is.

But also: Yes, they are giant snobs. I get that Adam is a genius with centuries of absorbing great art and hanging out with brilliant artistic minds and refining his taste, but his music is still *BORING*.  On that, I love this little quote from Jim Jarmush speaking to Vulture, after being asked if he feels “a particular kinship” to the characters. “Yes, I do. I feel very close to a lot of their concerns, though they’re not me. And they’re quite different from each other. I see Adam as a little bit more fragile. He needs to see some of himself reflected back on him, whereas Eve has no need whatsoever with that. She’s open to all the experiences of having a consciousness, [which] to her are enough. I understand, too, when Eva, the sister, refers to them as snobs. They are snobs. That’s part of their character viewed from the outside. I love to read negative reviews; I don’t really read the positives. And someone said, “Yeah, but they’re just snobbish characters.” Well, if you and I were alive for 500, 1,000, 2,000 years, we would certainly appear as snobs to everyone else, because our knowledge and experience would be so much more vast, you know? “
Anton Yelchin 🙁

I watched this back when it came out, and really enjoyed it. It’s just such a chill, fun, slightly wacky and very COOL hang out movie, where the point is very much to enjoy the texture of this world and these stupidly hot and smart people. They love art, they love science, they love music and literature and they love each other. It’s a tone piece and a mood piece and not MUCH happens, but that’s totally ok. It has texture and vibes for days and days (nights and nights?)
I adore the filmmaking here, yes it’s pretty affected INDIE MOVIE SENSIBILITIES but done with a big old budget and gorgeous production design and so many lovingly selected props and sets that it works really nicely. I love the color choices (and lighting/possible post processing choices) and those nice, delicious, dark reds. It’s a chill vampire movie, with chill vampires, and it all feels right.
I totally have a crush on Eve, and I definitely get the crush on Adam too, to be honest. I mean, my guy is very sad, but he is definitely hot, talented, and also pretty (unintentionally, maybe) goofy (paging Dr. Faust) so I actually really do get it here, lol!
Ok, here’s part of why I love this movie: the idea of living for hundreds of years is miserable in many ways (and in most movies), but spending it with someone you love this much seems – not so bad. Also, they are platonic ideal “Renaissance people” – science geniuses, artists, literary minds who speak so many languages (and also have cool vampire speed and strength and senses, ok, that’s cool too). I aspire to be good at lots of different things, the idea that a human (or semi human, lol) mind can master so many things is just infinitely appealing to me. I guess this is vampire idealization, but it works for me!
They are snobs, though, huh? As horrible, awful, no-good little sister Ava puts it when she gets kicked out.
I truly, truly loved the gentle sense of humor throughout, but most of all in the blood bank scenes with Dr. strangelove. It’s such a fun, off kilter, sweet little performance and it really makes me smile.