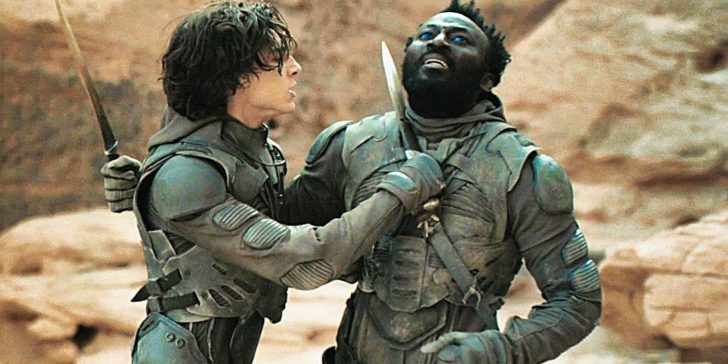 Dune 2 director Denis Villeneuve is calling the sequel the biggest challenge of his career and is ready to dive right in after the Oscars.

Dune’s director, Denis Villeneuve, has stated that his next film, Dune: Part Two, will be the biggest challenge of his career. Dune, released in 2021, was the first of a two-part adaptation of Frank Herbert’s 1965 novel of the same name. The film was released with fairly positive reviews, and the sequel was confirmed within months of the first movie’s release. The sequel will pick up where the first left off. Paul (Timothée Chalamet) has taken it upon himself to fulfill his father’s goal of bringing peace to the planet Arrakis and has joined the planet’s natives, the Fremen, to achieve this. He is joined by Jason Momoa’s Duncan Idaho and Sharon Duncan-Brewster’s Dr. Kynes in his quest, losing both of them in the process.

Dune: Part Two is diving right back into the story, with Paul having just joined the Fremen. Villeneuve previously revealed that the script for Dune 2  is finished, although it may still be subject to slight tweaks and rewrites as filming progresses. Filming has yet to officially start on the sequel, however, Dune: Part Two will use more IMAX footage to allow the environment of Arrakis to shine and is slated to be released in October of 2023. Story details can be assumed given the source material, but the director has also said that the sequel will focus more on the evil Harkonnen family.

While speaking with ET Canada, Villeneuve noted that he’s diving right into the sequel and that the film will be the biggest challenge of his career. He will be beginning prep on the movie beginning Monday, March 28, immediately after the Oscars the night before. While Villeneuve did not want to spoil anything about the movie or the production, he did have this to say:

“It’s gonna be intense. I’m in prep right now. Monday morning, as soon as we leave Los Angeles, it will be to start to go on with prep. I cannot say nothing about the movie – I don’t like to talk about projects as I am doing them – but it’s probably going to be the biggest challenge of my career, again, because it’s even more complex than Part One.”

Villeneuve has previously hinted that some characters, such as Zendaya’s Chani, will have a more integral role in Dune 2. Dune: Part Two will adapt the second half of the classic novel and is not the only Dune project currently in the works. A spinoff series, Dune: The Sisterhood, is in the works with HBO Max, and it is also rumored that Villeneuve may make Dune 3 to continue the story of Paul and Chani. If Warner Bros. does decide to make Dune 3, it will make Villeneuve’s job even harder as he would have to lay the groundwork for yet another sequel. Regardless of whether Dune 3 happens or not, given the scale of Dune 2, Villeneuve clearly has his work cut out for him.

Dune and Dune: Part Two aim to adapt a beautiful novel in a satisfying way, giving a face to a piece of foundational sci-fi literature, and if the Oscar nominations are anything to go by, they’re already succeeding at that goal. It’s clear that Villeneuve and the entire cast and crew respect the source material, and the director calling it the biggest challenge of his career is a promising sign for fans of the original novel. Couple that with the possibility of other powerhouse stars, such as Florence Pugh, in talks to join for characters in the sequel, it seems obvious that the world of Arrakis will be anchored in the public eye for a good while to come.

Next: Dune 2’s Perfect Feyd-Rautha Casting Has Already Been Teased

Matthew Scarpa is a freelance writer for Screen Rant and has been writing children’s television scripts since 2015. He studied Writing for Entertainment at Full Sail University and has accrued over two dozen awards and contest placements for his scripts since 2019.

Based out of Dallas with his wife, Matthew spends more time than he should reading and writing scripts, watching movies, and coming up with terrible dad jokes that he torments his friends’ kids with.