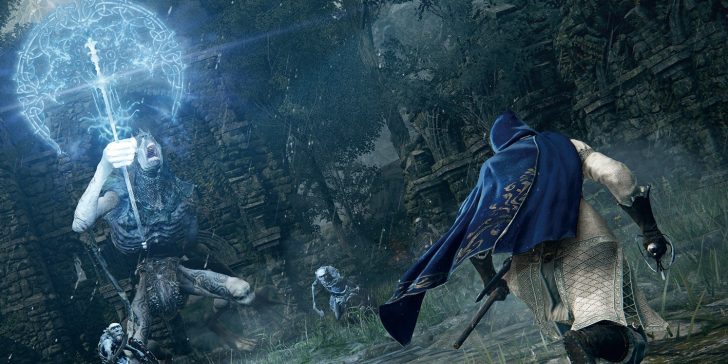 You’ve probably seen a video or two of someone casting the Comet Azur laser beam spell to melt a boss. While the spell itself is strong, what makes it extremely potent is the Cerulean Hidden Tear for your Wonderous Physick flask. When consumed, you can cast any number of spells for a short duration without spending a single bit of FP. It’s an exceptionally strong tear and an absolute must-have for mages. Here’s where to find it:

How to Get the Cerulean Hidden Tear

In order to get the Cerulean Hidden Tear, you need to progress far enough to access the Atlus Plateau. While this can be visited fairly early on, you need to kill a tough, hard-hitting boss for this item, so this isn’t something most low-level players can do.

Once you reach the Atlas Plateau, head north until you reach the Bridge of Iniquity site of grace. This will be at the foot of Mt. Gelmir.

Head through the broken barricades into what appears to be the aftermath of a big battle.  Dodge the mechanical monstrosities and keep towards the cliffs on the left. Eventually, you will come across a tall ladder that leads up to the next ridge. Quickly dismount and climb the ladder; otherwise, one of those terrifying coffins on wheels will hit you. Once you reach the top, there will be a site of grace to your left, so make sure to ignite it before you progress!

From the First Mt. Gelmir Campsite, head northwest past the wooden tower and across the long rock to the other cliffside. A strong, multi-armed enemy will drop down and attack, so kill it. Once it’s dead, you can climb up the ladder to the next cliff, which has a few smaller, weaker enemies hanging around. Keep killing enemies and climbing ladders until you reach the Ninth Mt. Gelmir Campsite.

Hop on Torrent when you reach this site of grace and use the wind tunnel to launch up into the air. You will land in a boss arena, but you can ignore this enemy if you wish. Instead, head right when you land and look for a large rock jutting out towards the west.

Ride Torrent along the rock until you are overlooking the Volcano Manor on the left and another ridge in front of you. Jump down onto the rocks and ride down to the lower level instead of going right to Volcano Manor. You’ll know you’re on the right path because a bunch of those giant spider hand monsters will try to attack.

From the Path of Iniquity site of grace, make your way down towards the Erdtree to trigger a boss fight with the Ulcerated Tree Spirit boss. I already killed mine, so please enjoy this artist’s rendition of this spooky plant behemoth. (Editor’s Note: It’s very good.)

If you’ve been exploring, then there’s a good chance you’ve fought a variant of this enemy before. The moves are more or less the same, although it seems to have a few more holy attacks this time around. You can use Torrent in this fight, so keep your distance and only attack when you have an opening.

The Ulcerated Tree Spirit has a huge hitbox, so abuse this by sticking to its side or behind. Hit-and-run tactics are especially effective since this boss can quickly lash out if you overstay your welcome. Once you defeat this boss, you will earn the Cerulean Hidden Tear. Now just go to any site of grace and equip it to your Wonderous Physick. Consuming this special flask with the tear inside will grant the user around 10 seconds of unlimited FP, allowing you to absolutely melt enemies. If you’re a mage, I really cannot suggest getting this tear enough — it will make some fights so much easier!