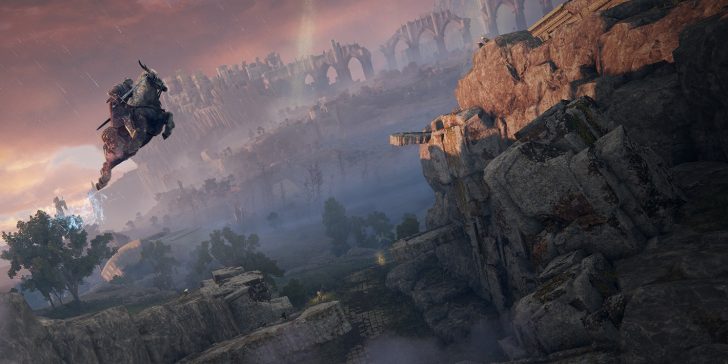 While there are many build possibilities in Elden Ring, one of the flashiest is tied to the mage. Possessing some seriously powerful spells, there have been tons of clips circulating throughout social media of users utterly wasting bosses with a giant laser beam spell. This is the Comet Azur, perhaps the best single-target damage spell an astrologer can use in Elden Ring. Capable of melting health bars, you will absolutely want this if you plan on using magic as your primary source of damage.

Here’s how to get this spell and what level you should try hunting for it:

How to Get Comet Azur

Before we begin, I’m sure you’ve been told this is a spell you can nab early on. You can, but it will take a lot of work and riding by enemies who can instantly kill you if they land a hit. Because of this, I don’t recommend going for the Comet Azur until you are at least Level 40-50 and past Godrick the Grafted.

To begin, we will be starting at the Edrtree-Gazing Hill (shown above) just north of the Grand Lift of Dectus. You can reach this by either finding both halves of the lift’s medallion or by taking the side entrance via scaling the cliffside by the Ravine-Veiled Village site of grace.

From the Edrtree-Gazing Hill, go up the hill. Head north up the hill towards the statue that typically directs you to a hidden dungeon or boss. Look at the ruined town and go northwest around the corner. You will trigger a boss fight, but this foe can be easily ignored by just riding past him.

As you ride through the tunnel, you’ll eventually reach a fork in the road (shown above). Go left through the zombies and down the path. You’ll know you’re on the right route because a bunch of undead will come raining down from the sky. The Lands Between has some really odd weather.

Keep riding past more explosive thermal vents until you emerge from the tunnel.

Before you will be a site of grace (circled above) and a large fort with a variety of branching paths. Go rest at the site of grace and then head up the small hill towards the barricade. Ride past all the guards and mechanical monstrosities towards the small cliff overlooking the pool of lava.

Surprise, your old friend the Magma Wyrm is back and wants a rematch! Too bad we don’t care, so ride along the right side of the lava pool until you reach the other side of the arena. There will be a small path on the left guarded by some primate warriors. Head up the path and through the graveyard until you see a hill with a small wooden house overlooking a cliff.

Here’s where things get a bit more dangerous because there are not only primate warriors, but also a giant bear that will quite literally jump from the cliff onto the road. If you’re along the left side of the path, it will most certainly hit you with this surprise attack. To avoid this, keep to the right and go through the large stone archway. You will see some houses on your right, along with another site of grace you can activate.

Now go up the hill, through the barricades, and enter the Hermit Village. Do not stop riding, as there are some seriously nasty enemies in this town that can be tricky if you’re under-leveled.

Ride towards the other end of the village and towards the two mages standing by the demi-human mini-boss. Just beyond the boss on the left will be a site of grace you can rest at. Head immediately towards this and rest to reset the enemies so they don’t attack you.

Once you’ve stopped the boss from being aggressive, stand up at the site of grace and turn around. You will see a stone statue with a bunch of green crystals growing out of it. Go up to this statue and talk to it. You won’t get a response, but doing it a second time will cause the statue to give you the Comet Azur spell.

For those who have already explored a lot of the map, you just need to warp to the Seethewater Terminus site of grace and talk to the statue. The Comet Azur spell requires a staggering 60 Intellect to use, so don’t expect this to work with builds that don’t heavily lean into this stat. It will also take up three of your spellcasting slots, so if you want to use something other than this you’ll need quite a few Memory Stones. Once you have the spell and the correct Intellect stat, you can equip it at any site of grace.