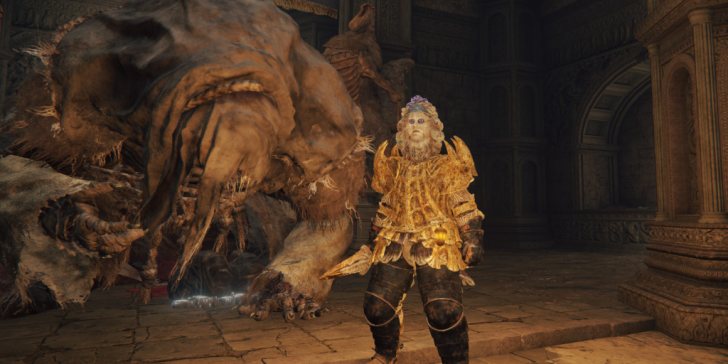 Elden Ring players can finally get the Cinquedea dagger and Dragoncrest Shield Talisman once more with Patch 1.03.2! The mysterious “kill plane” is no longer in effect.

Previously, folks were able to find the aforementioned secret items hidden beneath the Bestial Sanctum. That changed with a huge gameplay balance update, Patch 1.03, just a few days ago. Getting the items requires players to fall down a series of roots and towers just to the left of the Bestial Sanctum: a secluded church in Caelid where one can acquire “Beast Incantations.” The previous patch put an end to that. A “kill plane,” which basically means an invisible floor that treats your character as if they’re dying from fall damage, was added to the area. This effectively removed Dragoncrest Shield Talisman and Cinquedea from the game for anyone that didn’t already have them.

This was seemingly a mistake. FromSoft has fixed the issue and we can confirm that both hidden items are available to acquire once again. You just need to exit the Bestial Sanctum and drop down onto the root to the northwest (i.e. the lefthand side of the church if you’re facing its main gate). The items are found on the third “floor” down after more controlled falls — right where they were before. The Dragoncrest Shield Talisman is useful, but at least has upgraded alternatives later in the game. Cinquedea — a dagger that actually boosts Beast Incantations when you equip it — was much more unique. It’s good to have them back!

The other highlight of the (very brief) patch notes is a fix for the “infinite falling” hack some players used “to teleport others to incorrect map coordinates.” Nasty folks were able to hack their own games in a very specific way before invading other players. This would immediately cause the victim’s game to crash. Worse still: when they logged back in, players would be stuck in an infinite falling loop below the game world. Since they couldn’t die or fast travel to get to a Site of Grace, this could effectively destroy saves.

You could of course avoid invasions altogether. Unlike Dark Souls, players in Elden Ring need to opt in to invasions by using certain items. Such as the Furlcalling Finger Remedy. Since said item is also required to summon co-op partners, however, this was obviously less than ideal for everyone. The speedy fix is nice to see.

This also comes not too long after the hubbub around an exploit in Dark Souls 3 which fans actually attempted to warn the developer about in the leadup to Elden Ring. There’s really never a dull moment when making these games, I take it.

Lastly, I’m actually (selfishly) glad there weren’t more balance updates just yet. I just finished putting together three tier lists for Ashes of War, Incantations, and Sorceries last week. One of which went up about five minutes before the surprise balance patch… I could use a few days’ break before having to redo them all over again (though I can always name a few things I’d still like to see changed).