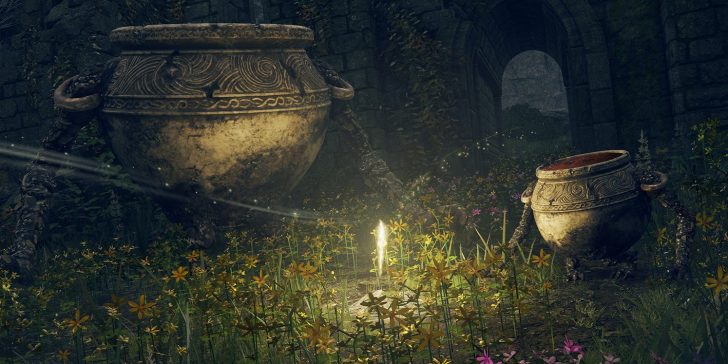 Recently, a new patch not only balanced a whole collection of weapons and gear, but also added a new NPC called Jar Bairn. This lovable little jar boy can be found pretty early on in your adventures. However, to fully complete his storyline, you will need to progress to nearly the end of the game. This is largely because you need to complete other characters’s side quests to complete Jar Bairn’s. However, if you want to meet this lovable little pot and earn the Companion Jar talisman, here’s how to complete this side quest:

Where to Find Jar Bairn

Unsurprisingly, Jar Bairn is located in Jarburg, along the eastern coast of Liurnia (shown above). This is a rare area in Elden Ring, as everything residing here won’t instantly try to murder you for wandering in. You will need to carefully climb down the hill with Torrent via jumping on the jutting platforms along the cliff. This is the only way down, so make sure to take your time — otherwise, you could miss a jump and instantly die.

When you arrive, approach and ignite the Site of Grace. Then face the town and run to the small house on the raised ledge to your left. You’ll see a cute little jar sitting on the porch — that’s Jar Bairn. Speak to him until he asks if you will be his Potentate; agree to his request. Once you’ve exhausted all his dialogue options, go back to the site of grace and rest. Now run back to Jar Bairn, who will say the elders have given you permission to pick all the flowers. You don’t need to grab all of them, so just get a handful and then go rest at the Site of Grace again.

Return to Jar Bairn and speak to him a third time to learn Alexander is actually his uncle. I can see the resemblance. After this, you won’t be able to progress Jar Bairn’s questline until you have spoken to Diallos at the end of the Volcano Manor side quest. You can find a walkthrough of this quest here from YouTuber Games From Mars. For the Jar Bairn quest, progress past the Volcano Manor quest when Diallos decides to leave this location.

If you’ve already done this, warp to another Site of Grace and progress time a couple of days before returning. Speaking to Jar Bairn will trigger another dialogue exchange — this time, he will talk about poachers. After you exhaust his dialogue, run back to the Site of Grace, rest, and then speak with him a fifth time. He will explain that a new Potentate is in town — surprise, it’s Diallos! After talking with Jar Bairn, go down into the town and enter the last house on the right. Inside, you will see Diallos tending to a pot on the ground.

Speak to him, fast travel to another location, and then progress time a couple of days before coming back. This part is wildly finicky and may take multiple tries to progress the story forward. I found fast traveling to a location, passing time, moving to another one, and repeating this process a few times worked. You’ll know you have progressed far enough when you return to town and find all of the jars broken in the area. Jar Bairn also won’t be on his stoop; instead, the little guy is on the main road looking at a wounded Diallos on the ground.

Go talk to Jar Bairn and then speak to Diallos. Tell him he protected the jars, leave, and then progress time once more. Return to the town to find Jar Bairn back by his house, as well as some nice loot on the ground where Diallos died. This includes Numen’s Rune, Hoslow’s Petal Whip, and Diallos’s Mask. Speak to Jar Bairn to learn that he wants to leave and become a warrior jar.

Now you’ll need to complete the entire Alexander questline, which spans nearly the entirety of Elden Ring‘s story. You can use a good walkthrough of this quest by Gamerpillar if you haven’t beaten it. After beating Alexander’s quest, return to Jar Bairn and give him Alexander’s Insides. After Jar Bairn’s finished talking with you, leave, progress time, and return to this location. Jar Bairn will have set off on his quest, and you can nab the Companion Jar talisman where he was normally sitting. This marks the end of the Jar Bairn quest.