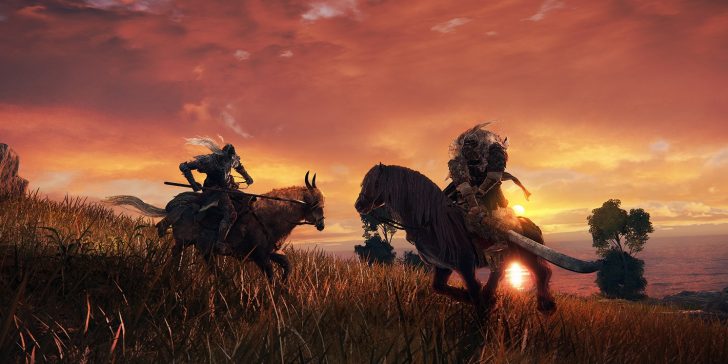 If you’re like me and are looking for a good physical weapon as a mage, then you’ll want to nab the Moonveil. It’s obtainable right away, but I recommend waiting and leveling up since you need 12 Strength, 18 Dexterity, and 23 Intellect to wield it. Here’s where to find the Moonveil katana:

How to Get the Moonveil Go to the Gael Tunnel

Your first step is to go to the Gael Tunnel (shown above) in the Caelid region. This place can be accessed right away, but I recommend leveling up a bit before venturing to this region. While it isn’t the most difficult region, it can be pretty unforgiving if you’re brand new. For reference, I ventured out here when I was a little over Level 30 and had a generally effortless experience.

The entrance to the Gael Tunnel itself is along the cliffs just below a small graveyard. You’ll see two armored knights guarding the entrance and some tents. Once you kill the knights, head inside and deal with the other two standing by the catwalk. If you’re quick, you can backstab and shove one of them off the edge for an instant kill. After those foes are dispatched, make your way down the large hole to fight a Site of Grace at the bottom. The Gael Tunnel is all about stealth and targeting the right enemies. Unless you want to fully explore, there are only a few foes directly in your path. In this dungeon there are normal human knights, miners, and those writhing octopus monsters you usually see on the coast. Almost all the knights can be dispatched with a backstab before they even notice you, however, the miners will be a bit trickier.

These enemies are heavily resistant to physical attacks, but are comically weak to magic. If you are a mage this should be a walk in the park for you. Those not utilizing spells will want to try and backstab these foes to ensure maximum damage. Most of their attacks are pretty slow, so you can circle behind them pretty easily. That being said, be careful of the ones with sacks on their back as they can perform some pretty gnarly ranged firebomb attacks.

Work your way down deeper into the mines until you reach a large set of wooden double doors. Do not go through them right now, instead go through the smaller door on the left. Inside you’ll find a big pot enemy, but if you don’t touch or hit him this enemy won’t attack. Run past the pot creature to find another Site of Grace. Rest up because it’s time to fight a giant lava-spewing lizard. Don’t let the Magma Wyrm’s fiery appearance fool you, it’s actually not that bad. Before you enter I strongly recommend equipping any fire resistance gear along with the Flamedrake Tailsman. Around 50 percent of this enemies attacks consist of spewing lava everywhere and they are frequently used. This boss has a lot of hard hitting moves, but it has very slow wind-up and recovery time.

Because of this, you can easily punish the Magma Wyrm by waiting for it to attack, quickly rolling in, slashing once or twice, and getting away. If you’re a close quarters fighter, be wary of its left hand, because it will frequently smack the ground with either the sword or entire body to cause an AoE (Area of Effect) shockwave. Always keep an eye on its movements, so you can dodge when it rears up to attack.

Do not chase the Magma Wyrm when it starts vomiting lava and running around the area. The fire will make it impossible to get behind it or next to it, so just use this time to get a bit of distance. Additionally, once the Magma Wyrm hits around half health it will occasionally launch into the air and try to crush you. This move does a comical amount of damage, but can be easily avoided if you’re paying attention. If you’re really struggling, try using poison bombs to supplement your damage if you’re unable to get close.

For magic users, just keep your distance and run anytime the wyrm uses its fire moves. All of its attacks are simple to dodge, just make sure it doesn’t corner you when it charges. The easiest way to die in this fight when using magic is getting greedy. Don’t try to cast multiple spells in a row. Just launch an attack and reposition. Trust me, you’ll have a much easier time fighting this boss if you aren’t constantly in danger of being run over.

Once the monster is killed, you earn a Dragon Heart and, more importantly, the Moonvel Katana. Not only does this Katana do Bleed damage, but it scales with both Intellect and Dexterity, making it a perfect secondhand weapon for mages.