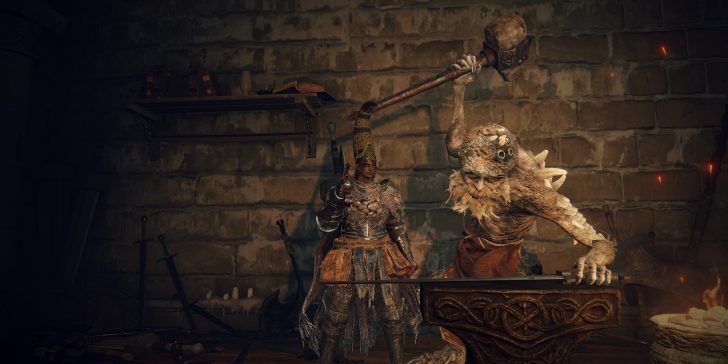 An itty-bitty Elden Ring patch dropped today. It addresses an issue that caused the game’s PC version to not recognize graphics cards — instead defaulting to integrated graphics. This was obviously less than ideal… More common issues like “micro-stuttering” and strange frame rate dips persist, of course. Though they seem a damn sight better than when I played the game before launch. Meanwhile, the PlayStation 5 users should see Elden Ring autosave properly now. Whereas they previously needed to manually “Quit Game” every single time the console entered rest mode or powered off. These are some arcane problems, to be sure, but none of them involve my Arcane problem — which is that most Arcane weapons in Elden Ring still aren’t scaling properly.

Yes, I’m railroading this patch note news into my own, personal soapbox about a really annoying bug that’s dulled my efforts to make an Elden Ring Arcane build. Yes, there will be some MINOR SPOILERS ahead as I discuss certain weapons and spells that aren’t yet working properly. If you just want to see the (incredibly vague) update 1.02.2 details, I’ve embedded the tweet below. Just know that there are no further patch notes beyond “Fixed other bugs.” What you see is what you get.

PC:
????Fixed an issue where the graphics card was not being used, resulting in slow performance.
????Fixed a bug that caused the game to quit under certain conditions during a battle with the Fire Giant.
????Fixed other bugs.

I can now confirm, however, that these “other bugs” did not include broken Arcane weapons — including Rivers of Blood and the Marais Executioner’s Sword. This is disappointing for me, specifically, because I selected the Stonesword Key keepsake at the start of Elden Ring. This sent me down a semi-secret dungeon at the very start of the game (i.e. inside the tutorial area) where I found a Dragon Communion Seal. This magic focus scales with the Arcane character stat, which led me on a personal quest to build my character around the mostly non-combat ability. And it’s been a bit of a bummer to find that late-game weapons using Arcane just aren’t working right now.

Arcane, you see, doesn’t have direct combat utility like Strength or Intelligence. It’s the “luck” stat. It mostly just increases the rate at which enemies drop items. Unless of course you have a weapon that “scales” with Arcane. This is the primary way of boosting a weapon’s damage in Elden Ring beyond basic upgrades. Upgrades, you see, only raise a fixed amount of damage on each weapon. Whereas scaling multiplies that fixed number over time. Most weapons see at least a little scaling from stats like Strength and Dexterity. The same goes for Intelligence and Faith (which usually boost spells called sorceries and incantations, respectively). Arcane, on the other hand, only benefits a rare handful of items that specifically call for Arcane.

This makes building around the stat a bit more challenging — and a bit more fun. FromSoft has often rewarded this esoteric undertaking with extremely powerful late-game weapons that specifically use Arcane (or Luck as it’s been called in prior games). That’s still kind of true. There’s an entire, silent side quest in Elden Ring involving Churches of Dragon Communion. You can hunt dragon bosses scattered across the game world to harvest their hearts and steal their powers. These scale with Arcane. And because I found a weapon that boosts Dragon Incantations so very early, I also immediately set myself on the path of collecting them all. To make the most of this build, though, you still want a good melee weapon. Preferably one that benefits from Arcane. Some of these weapons work just fine! Reduvia is a quick-slicing dagger that fires coagulated blades and inflicts Blood Loss (bleeding, poison, and other status effects usually scale with Arcane, making the stat even more unique). I prefer something with a bit more oomph, though. Something like one of the Legendary Armaments hidden around the Lands Between. Something like the Marai Executioner’s Sword.

This was a hard-won prize from one of the toughest boss battles I’ve had in the game. The greatsword is an absolute beast, too. At least in theory… Unfortunately, the “Legendary Armament” — with an awesome telekinetic drill attack — does noticeably less damage per hit than the faster, easier-to-find Reduvia at the same level. That’s because the Marais Executioner’s Sword, like a lot of Arcane-focused weapons, has zero scaling at the moment. The section next to the base damage number that normally shows a small “+” (indicates how much extra damage you get from scaling) simply isn’t there. The whole area of the equipment menu is blank. This leaves what are supposed to be powerful, interesting weapons… laughably weak in practice.

This is obviously a bummer. It’s also an issue I haven’t seen talked about much, compared to things like the aforementioned performance issues. Elden Ring is still a fantastic game, of course. It still gives me plenty of other personal goals to set and follow through on my own. But after 140 hours with the game (and counting) it’s a bit sad I can’t see one of the earliest achievements I set for myself all the way through. At least not the way I want. Hopefully the Arcane scaling bug gets addressed sooner rather than later. Possibly just in time for my next playthrough.