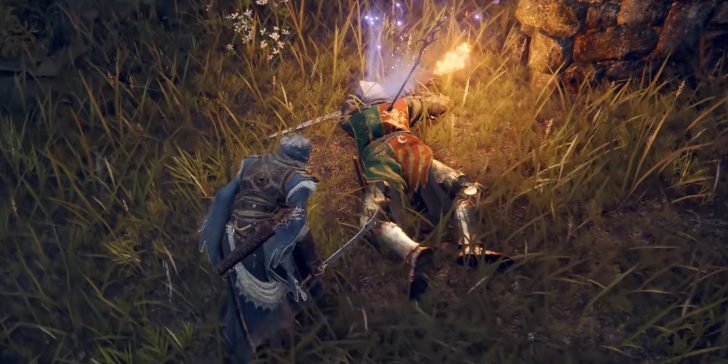 I’m comically bad at Elden Ring, so most things impress me, but a player masquerading about dressed as an enemy NPC and tricking invaders into ignoring them is objectively incredible.

Calmly, carefully, and with way more skill than I could ever hope for, someone did exactly that by pretending to be a regular ole soldier and meandering about. The video evidence, which I held my breath for most of, is from u/xdc_lis on Reddit (via @JezCorden). They take out a Godrick soldier while wearing the same equipment set, then occupy the enemy’s usual path to set up for some sneaky PVP business. I have an entire emotional breakdown in Elden Ring PVP, and this does little to dissuade my fears of getting destroyed.

When another Tarnished invades, they don’t notice the Fake-Godrick-Soldier is the host walking the same route,  hanging out as if FromSoftware programmed them to be there. I get how someone falls for it, they’ve got the whole ensemble going right down to the torch, but I don’t get how they’re so chill casually shuffling back and forth while an invading player just goes speeding by. They’re way too close, like definitely-feels-the-wind-off-the-invader-running-by too close.

In the moments they cross paths, I’m not sure who I’m gasping for. The tiny hater in me wanted to see someone get ganked from the host Tarnished losing their cool or a smarty-pants invader trick, but it ends peacefully with “Recusant zSplittyy has returned to their world.” Bless you, zSplittyy.

Now I realize everyone playing this game is still observant as hell⁠. There’s a million comments demanding they notice the imposter is too short to be a soldier or to pay attention to the compass showing the target’s location. Apparently, you can also just lock on to everything and double-check to make sure it’s not some clever Tarnished roleplaying as an NPC.

I’m like a little kid playing hide-and-seek in these games. If someone gets within ear-shot, I’m gonna start cackling, and by cackling I mean floundering about and giving my position away. I fell for these plain-sight hiding spots in Dark Souls II and never could do it myself, kinda like this dude getting stabbed as a bush. Anyway, y’all beware of Tarnished dressed as soldiers, bushes, and damn near everything else, I guess. I’m playing paranoid and swinging at everything.