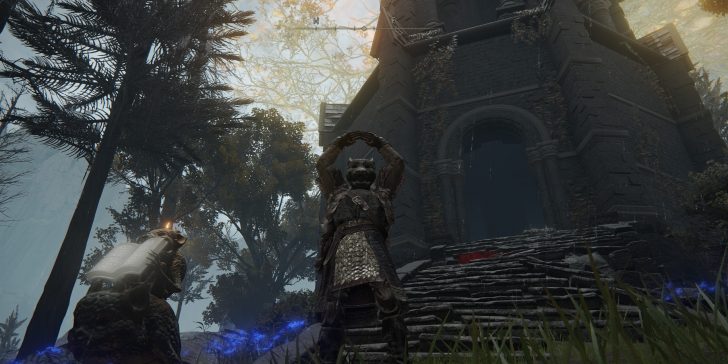 In Elden Ring, Tetsu’s Rise might be the first true puzzle you stumble upon. The small tower is located in Liurnia, a fairly accessible region, and cuts a pretty obvious silhouette against the horizon. Its mysteriously sealed blue door might also catch your eye. There are several of these strange spires dotted throughout Elden Ring. No two are entirely the same, but they have their similarities. Namely, most towers require you to solve some kind of puzzle. The rewards are also similar each time and tend to be worth it (depending on your character build). That’s why we’re here to help you unravel the mystery of Tetsu’s Rise and claim what’s inside! Let’s take a look.

Note that this guide will include SPOILERS for Elden Ring. It’s a guide, after all, and… that’s usually how guides work. Discovery, trial and error, and exploration are a major part of the game. You shouldn’t be reading this guide if learning this particular puzzle solution will ruin that for you. Just an FYI!

First things first: Let’s find Tetsu’s Rise. It’s fairly easy to spot on the upper end of the Liurnia lakebed. It’s easily the biggest island north of Raya Lucaria — surrounded in a small pine tree forest that leads up to the center of a hill. There’s a Site of Grace on the southern tip of the island, too, just before a footpath that leads up to Tetsu’s Rise itself. Make sure to Touch Grace before continuing.

You can approach the blue door at this point, but of course nothing will happen. The only way to open it is by solving a light puzzle in the area. Thankfully, it’s more of a scavenger hunt than a riddle. You just need to interact with the glowing podium (right in front of the tower) first. Your character will read a passage from the book on the plinth that simply says “Seek three wise beasts.” Then the fun begins…

You see, touching the book begins to spawn enemies. They’re not terribly strong or fast. They’re simple, shambling zombies that slowly walk towards you. The problem is that the zombies do not stop coming. Slaying one or two will simply cause that many to rise again up out of the ground. Infinitely. Killing these additional monsters is useless, then, and not actually part of the puzzle. Not beyond keeping you on your toes while you search for the three wise beasts, anyway.

The wise ones are instead a different kind of undead: ghosts. Specifically ghost turtles. There are three identical ones surrounding the island. Your goal is to find these illusory creatures and strike each of them down. One hit from any weapon seems to do the trick.

Turtle #1 is the easiest to find. It’s just walking on the grass north-northwest of the tower. Turtle #2 might trip you up, but not if you look to the sky. The critter is on the east side of the island: hanging on the side of a tree. You just need to whack the tree with any attack or shoot the turtle with a ranged weapon. Either one will make it fall and count the turtle out. Turtle #3 easily gave me the most trouble of the bunch. The island around Tetsu’s Rise is largely split into two levels: the lakebed below and the hill where zombies spawn. However, for this turtle, it’s worth noting that there are actually a couple of smaller outcroppings between the two “floors.” One particularly large one is immediately south of the tower icon on your map. The relative location is shown here on the map above, where my character icon is standing. Just face due south and look down over the edge of the rocky ledge you find there. The small shelf of rock and trees (as well as the turtle residing there) should be visible.

Of course, if you’re playing online, all of this will likely be much easier. Players leave messages left and right indicating where the three wise beasts can be found. But it doesn’t hurt to have a good starting point. Particularly when there’s a horde of monsters shuffling towards you the whole time. Best of luck, Tarnished!