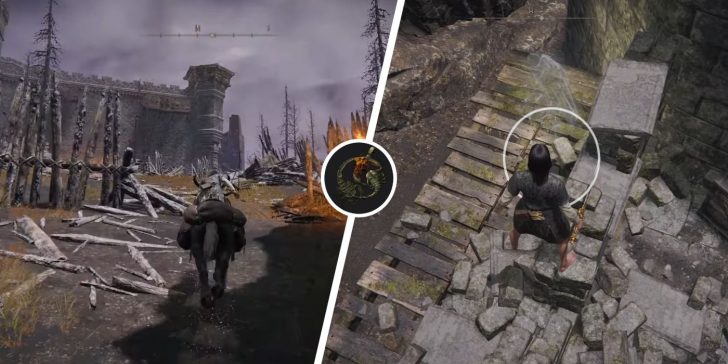 To get the fire damage-boosting Fire Scorpion Charm in Elden Ring, flame-wielding Tarnished warriors must locate a small stronghold within Mt. Gelmir.

Like the Fire Clutch Ring of Dark Souls II and III, the Fire Scorpion Charm is a Talisman in Elden Ring that boosts fire damage by 12% but reduces physical damage absorption by 10%. The Talisman is a must-have for those running Fire Mage builds or flame-enchanted weaponry. Furthermore, the Fire Scorpion Charm’s damage buff applies to fire-related Spells and abilities such as Black Flame, Black Flame Blade, Scouring Black Flame, Rykard’s Rancor, or even the Blasphemous Blade Greatsword in Elden Ring.

Tarnished adventurers can find the Fire Scorpion Charm atop the ramparts of Fort Laiedd, a stronghold located on Atlus Plateau’s Mt. Gelmir, north of the Magma Wyrm Field Boss’s lair. To get to this location, players must have reached the Atlus Plateau region by either activating the Grand Lift of Dectus or passing through the Ruin-Strewn Precipice. Once they’ve arrived, they can begin their journey from the Erdtree-Gazing Hill Site of Grace.

Related: Elden Ring: Where To Find Lord of Blood’s Exultation

Starting from the Erdtree-Gazing Hill, head up the left slope to the north leading to the Wyndhan Ruins. Ride towards the ravine on the left to reach the Seethewater River. Next, travel up the canyon waterway to Seethewater Cave and go down the trail on the left. Continue westward to reach Elden Ring’s Seethewater Terminus at the front of Fort Laiedd.

To get into the fort, ride towards the north side of the wall to find an entrance into the ward’s small courtyard. Inside, an elite Prelate will be guarding the doorway to the interior. Keep in mind that this mob’s aggro will always be triggered once the player approaches the area, meaning there’s no way to sneak past. Once the Prelate becomes hostile, the brazier atop its head will explode, spewing balls of fire about the enclosure. Tarnished do not have to kill this elite mob to enter the fort and can dodge-roll past to open the door. However, slaying the Prelate will reward adventurers with a guaranteed drop of the Fire Prelate Armor Set and the Colossal Prelate’s Inferno Crozier.

After going inside, head up the stairs to the upper rampart of Fort Laiedd. Atop the roof, walk over to the tower in the northwest corner. Jump over the battlement onto the wooden platform to find the Fire Scorpion Charm Talisman in Elden Ring beside a talking ghost. If players are having trouble getting over the chest-high wall, they can sprint jump to reach the wooden platform.