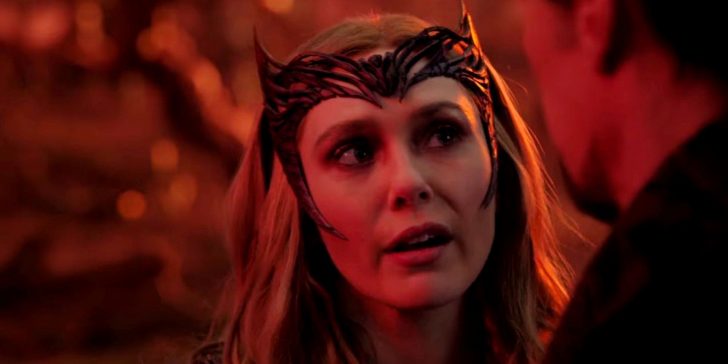 Exclusive: Elizabeth Olsen opens up about the ending of Doctor Strange in the Multiverse of Madness, discussing what is next for Wanda Maximoff.

Warning: This post contains spoilers for Doctor Strange in the Multiverse of Madness.

Elizabeth Olsen has opened up about the ending of Doctor Strange in the Multiverse of Madness, discussing what is next for Wanda Maximoff. Olsen reprised the role of the powerful magic-based Avenger following the events of WandaVision. Olsen stars alongside Benedict Cumberbatch, Xochitl Gomez, Chiwetel Ejiofor, Benedict Wong, and Rachel McAdams.

After ending the Westview Hex and saying her farewells to her family in the conclusion of WandaVision, Wanda falls under the influence of the Darkhold’s dark magic in Doctor Strange in the Multiverse of Madness when she is given the chance to reunite with her children. Wanda’s journey puts her at odds with Strange (Cumberbatch) as she spreads chaos and destruction across the multiverse. Through America Chavez’s (Gomez) actions, Wanda is given a glimpse at the threat she’s become, leading to her destroying the Book of the Damned and burying herself below Mount Wundagore, leaving her fate unknown. While Olsen had a hand in Wanda’s story in order to keep her journey consistent with her growth in WandaVision, the star has admitted that she is unsure what lies in store for the Scarlet Witch next.

When sitting down for an exclusive interview with Screen Rant, Olsen was asked what comes next for Wanda in the multiverse following her brief fall from grace in Multiverse of Madness, with the ending leaving things open-ended for the character. In response, Olsen revealed that she was eager to hear ideas about where Wanda could appear next, as well as wanting to hear fan discussions about Wanda’s fate. Admitting that she had no insight into what comes next, while Olsen stated that she was pleased where things had concluded for Wanda, she was also curious about what could come next for the character. Check out Olsen’s full response below.

While Wanda’s fate is unknown, Olsen hopes to adapt an iconic comic line of the Scarlet Witch in the MCU. Prior to the film’s wide release, Olsen revealed that she hopes to recite the line “No more mutants” from Brian Michael Bendis’ 2005 storyline, House of M. Since the X-Men still haven’t been introduced to the MCU, with the exception of Professor X in Multiverse of Madness, a full-on House of M storyline hasn’t happened yet. That being said, the possibilities for Wanda are endless since there are still multiple versions of the character out there in the multiverse. Doctor Strange in the Multiverse of Madness was left open-ended with the introduction of Clea, and by not seeing Scarlet Witch die, there’s no telling if she somehow escaped.

While writer Michael Waldron confirmed Doctor Strange in the Multiverse of Madness will inform the story for Loki season 2, Olsen’s comments suggest that Wanda may be absent from the ongoing narrative of the MCU for some time. While Wanda had given into a darker influence, both WandaVision and the sequel have shown that she is still a hero at heart, and due to her incredible powers, her absence from the Avengers is sure to cause a power vacuum as Earth’s mightiest heroes face threats even greater than Thanos (Josh Brolin). While her turn to villainy may cause some controversy and discussion among fans, it is clear by Wanda’s ambiguous fate that the Scarlet Witch can rise again.