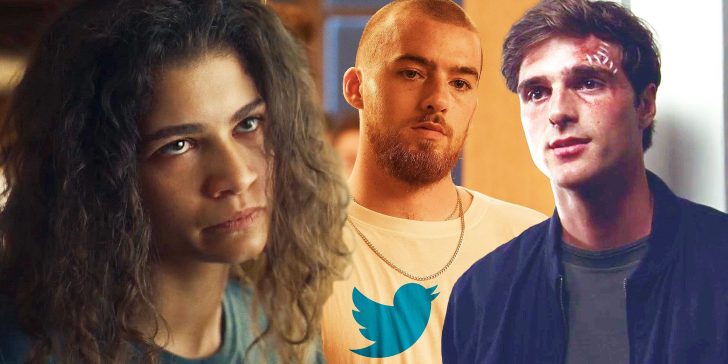 Twitter is reporting that the HBO Max show Euphoria starring Zendaya is the most-tweeted about show of the decade so far on the social network.

HBO Max’s hit show Euphoria is now the most-tweeted about show of the decade so far, according to Twitter. Euphoria is the teen drama series created and written by Sam Levinson (the son of acclaimed director Barry Levinson), which stars Zendaya, Hunter Schafer, Angus Cloud, Jacob Elordi, Eric Dane, Nika King, Sydney Sweeney, Alexa Demie, Barbie Ferreira, Maude Apatow, and Storm Reid. The show is a very loose adaptation of the Isreali show of the same name, which took place in the 1990s, but still focused on a group of 17-year-old teenagers engrossed in sex, drugs, and drama.

The first season of Euphoria consisted of eight episodes, with two hour-long specials situated between season 1 and season 2. Zendaya won an Outstanding Lead Actress Primetime Emmy for her performance in the show’s first season, which was mostly well-received by critics and fans, with some criticism over the excessive sex, nudity, drug use, and outlandish behavior. Euphoria season 2 has been a big hit as well for HBO Max, and now it appears that one social media source may have something to do with that.

Twitter is reporting (via Variety) that Euphoria is now the “most-tweeted about TV show of the decade so far in the U.S.” with more than 30 million tweets related to the show during its second season. That’s a 51% increase compared to Euphoria season 1, which shows the tremendous uptick in viewership, as well as social interaction of the series. Jenna Ross, Twitter head of TV partnerships issued a statement that encapsulates why Euphoria has gained this notoriety. Read her statement and check out some viral Euphoria tweets below:

From hilarious memes, to plot predictions and fashion inspiration, Euphoria has dominated Twitter this season. The show has built a strong community of dedicated fans who not only root for their favorite characters and scenes, but also openly voice their frustrations and fears, especially as it relates to the fate of characters.

Rue running last episode even though she had the craziest withdrawal ever: 🦸🏽‍♀️🦹🏽‍♀️

In addition, Twitter revealed that the most-tweeted about Euphoria season 2 characters are Fezco, Rue, and Nate Jacobs. They also listed the most popular hashtags and memes for the show, which include #FexiHive (referencing the burgeoning romance between Fez and Lexi), #EndNateJacobs, as well as memes of “Cassie in HS vs. Me in HS,” which has users comparing Cassie’s dolled-up Hollywood look in high school to their own, less than stylish real-world looks at the same age. Euphoria was just renewed for season 3, although no indication has been made as to when it would be expected to air.

The season finale of Euphoria season 2 will drop next week on HBO Max and will surely spark a deluge of new tweets to keep the show in the Twitter zeitgeist, at least for a week or so. Depending on when Euphoria season 3 airs, there’s plenty of time for other shows to steal its thunder, especially since the “of the decade” aspect of Twitter’s news is only in reference to the 2020s, of which there are still eight more years to go. With so many shows on the way and streaming only getting bigger and bigger, there’s no telling what series will come out on top as the “most-tweeted” by the end of the decade, but Euphoria is off to a good start. Still, there are things like Middle-Earth, Star Wars, and even Yellowstone to contend with, all of which are sure to give Euphoria a run for its tweets in the next few years.

Next: Euphoria Season 2 Proves There’s A Future Without Zendaya