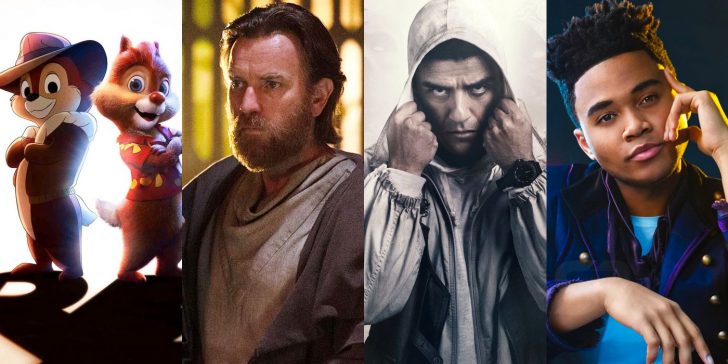 In May 2022, Disney+ is adding a new adventure from Chip n’ Dale, a musical comedy movie, and the highly-anticipated Obi-Wan Kenobi TV series.

In May 2022, Disney+ is bringing the final episode of its latest Marvel TV show, a behind-the-scenes look at this and a Star Wars TV show, a different type of competition series, a musical comedy movie, a hybrid/animated movie, and a highly-anticipated Star Wars TV series. The coronavirus pandemic continues but the world is slowly but surely regaining some normalcy, and while cinemas all over the world are back in action, streaming platforms are still a main source of entertainment for many. Platforms like Disney+ keep their audience entertained with new licensed and original content every month, and one of the perks of the Mouse House’s streaming service is that it adds new titles from its different branches every month.

April saw the arrival of the musical comedy movie Better Nate Than Ever, various documentaries to celebrate Earth Day, the series of animated shorts Scrat Tales, and a new episode of Marvel’s Moon Knight. May will see less content than in previous months, but it will see some titles from the National Geographic branch, such as Life Below Zero, Secrets of the Zoo, and Hubble’s Cosmic Journey, as well as content from Disney Junior, like season 1 of The Chicken Squad.

All eyes, then, will be on the new original content, and with good reason, as there are some big releases coming in May, such as the season finale of Moon Knight, a behind-the-scenes look at it and The Book of Boba Fett, a musical-comedy movie, the return of Chip n’ Dale’s adventures, and the adventures of Obi-Wan Kenobi after Star Wars: Episode III – Revenge of the Sith. Here’s everything new to Disney+ in May 2022.

Disney Gallery: The Book of Boba Fett explores the behind-the-scenes story of the legendary bounty hunter’s return to Tatooine with mercenary Fennec Shand, seeking to claim the territory once run by Jabba the Hutt. In this insightful new special, filmmakers, cast and crew reveal never-before-seen footage, groundbreaking technology, and the practical effects that brought it all to life.

Something Bit Me! (season 1)

The Wizard of Paws (season 2)

Join the likes of Oscar Isaac and Ethan Hawke as they reveal how Marvel Studios’ Moon Knight was painstakingly brought to life. Through insightful interviews with the cast and crew, along with immersive footage from the set, ASSEMBLED pulls back the curtain on this groundbreaking series. Additionally, The Making of Moon Knight incorporates a candid “roundtable discussion” with the series’ directors.

The Quest is a ground-breaking, immersive, hybrid competition series that drops eight real-life teenagers (Paladins) into the fantastic, fictional world of Everealm, where they must save a Kingdom by fulfilling an ancient prophecy. Throughout the eight-episode series, these heroes are immersed in a fantasy world come to life complete with a castle, royals, ethereal Fates, all forms of mystical creatures, and a Sorceress intent on destruction and power.

Set in the avant-garde street-sneaker subculture of New York City, Sneakerella is a high-energy, music-driven movie that puts a contemporary twist on the Cinderella fairy tale.

Secrets Of The Zoo (season 5)

Obi-Wan Kenobi begins 10 years after the dramatic events of Star Wars: Revenge of the Sith where Obi-Wan Kenobi faced his greatest defeat: the downfall and corruption of his best friend and Jedi apprentice, Anakin Skywalker, who turned to the dark side as the evil Sith Lord Darth Vader.

Ron Howard’s We Feed People spotlights chef José Andrés and his nonprofit World Central Kitchen’s evolution over a 12-year period, from being a scrappy group of volunteers to becoming one of the most highly-regarded humanitarian aid organizations in the disaster relief sector.

Next: Netflix Losing Subscribers Is Bad For Disney+ & HBO Max Too